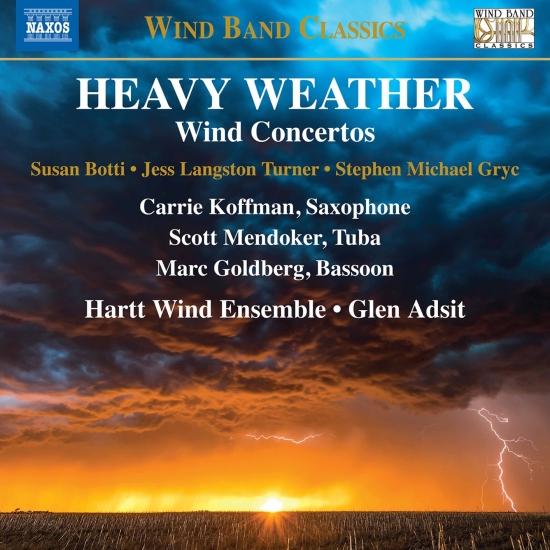 The Hartt School Wind Ensemble presents recent concertante works by three contemporary American composers – demonstrating once more the versatility of the ensemble, heard here in conjunction with soloists. Susan Botti’s sull’ala is inspired by flight, expressed in rhythm, harmony and texture, while Jess Langston Turner describes powerful meteorological phenomena in Heavy Weather. In Guignol, Stephen Michael Gryc conjures witty banter and frenetic action from his puppet hero.
"Three American composers offer wind concertos composed in the present century and here premiered on disc in concert performances from over the past decade.
A previous disc coupling together the identical composers was released in September 2015 when I commended them to an international audience as examples of the music now emanating from North America. It owes allegiance to no influences, but bridges the difficult gap between tonal and atonal concepts. Susan Botti’s Saxophone Concerto is pictorial and has been given the title sull’ala (on the wing), its three movements separated by two interludes picturing starlings in flight. For the soloist, Carrie Koffman, it must have presented many challenges, but to the listener it is an interesting mix of rhythms and freshly minted sounds. Jess Turner’s Heavy Weather seeks to depict the meteorological phenomenon that brings together two weather systems and pressures that when coming together can cause much devastation on the planet. The Tuba Concerto seeks to recreate the causes and not the result of that event. It uses the traditional sounds of the instrument, which can make for a rather grumpy mood. Finally Stephen Michael Gryc offers the character of Guignol who comes, as a puppet, from the type of characters we find in the Italian, commedia dell’arte, this funny one being also brave and courageous. Scored for bassoon and a chamber group of winds and percussion, the soloist, Marc Goldberg, is outstanding. In three movements, a delightful tonal score, with charming melodic invention, is a concise gem. The Hartt Wind Ensemble is among the finest college groups in the United States, and with their ‘Director of Bands’, Glen Adsit, conducting music that he obviously enjoyed. Good ‘in house’ recording team, and much recommended." (David’s Review Corner)
Hartt Wind Ensemble 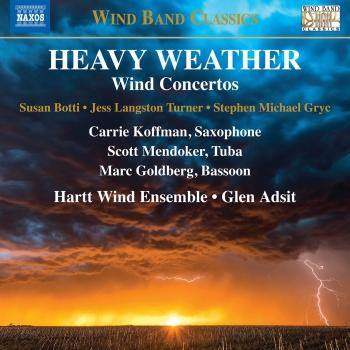 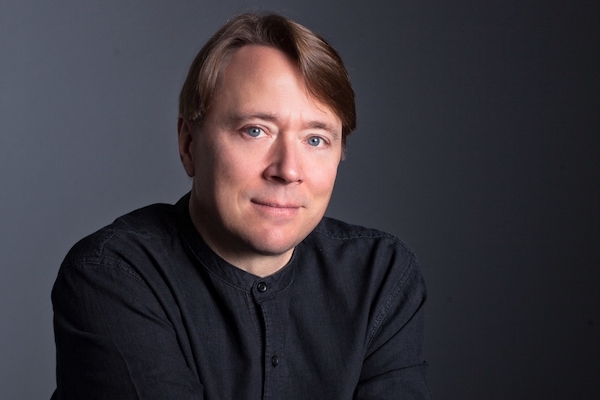 Glen Adsit
is the Director of Bands at The Hartt School where he conducts the Wind Ensemble. In addition, he co-directs Hartt’s new music ensemble (Foot in the Door) and the graduate instrumental conducting degrees with Edward Cumming, Director of Orchestras at Hartt. Professor Adsit was appointed the Director of Bands at The Hartt School in the fall of 2000 and was awarded the 2014 Larsen Award for outstanding teaching at the University of Hartford. In 2015 he was named one of the “Top 40 Educators Making a Difference” by Music For All. Prior to his appointment at The Hartt School, he served as the Associate Director of Bands at the University of New Mexico. From 1986 to 1992 he taught at both the junior high and high school levels in the Plymouth-Canton School District in Michigan.
In 2010 the Hartt Wind Ensemble made its Carnegie Hall debut in Stern Auditorium performing the world premiere performance of Dragon Rhyme by Chen Yi. The ensemble also performed at the 2007 (Ann Arbor, Michigan) and 2011 (Seattle, Washington) College Band Directors National Association Conference and three times at the Eastern Division CBDNA Conferences. Ensembles under his direction have performed at Hill Auditorium (Ann Arbor, Michigan), the Musikverein (Vienna, Austria), Benroya Ilsley Hall (Seattle, Washington) Carnegie Hall’s Stern Hall (New York, New York) and the Central Conservatory (Beijing, China), Harpa (Reykjavik, Iceland) and Kodak Hall at Eastman Theater among others. Adsit’s performances have won praise from such notable composers as John Corigliano, Joseph Schwanter, Bright Sheng, Susan Botti, Joan Tower, Michael Colgrass and William Bolcom.
The Hartt Wind Ensemble has recorded two compact discs for the NAXOS label; Passaggi and Dragon Rhyme. In reviews, Gramophone Magazine describes The Hartt Wind Ensemble as “stellar” and Fanfare Magazine wrote “and on the evidence of his two Naxos CDs, Adsit is simply one of the finest conductors leading a wind ensemble today.” Referring to the most recent release, Terra Cruda, Fanfare Magazine wrote “The technical ability of young ensembles continue to amaze me, the Hartt School and their conductor, Glen Adsit, in the top league of American student groups, their performances having professionalism written all over them.”
An advocate of new music, Adsit is the founder of the National Wind Ensemble Consortium Group (NWECG) and the Institute for the Advancement of Secondary and Primary Instrumental Repertoire Excellence (ASPIRE). The mission of these groups is to commission the world’s finest composers to write music for primary, secondary and professional level ensembles.
His professional conducting includes performances with the United States Coast Guard Band, US Army Field Band, The New Mexico Symphony Orchestra, The Rochester Philharmonic and regular appearances with the Hartford Symphony Orchestra. In 2012 he served as the Conductor in Residence for the Beijing International Composition Workshop held at the Central Conservatory in Beijing, China. In addition to his professional orchestral experience, he also conducted the University of Michigan All-State Intermediate Orchestra for seven years at the Interlochen Center for the Arts in Interlochen, Michigan.
His professional affiliations include membership in Phi Beta Mu, Sigma Alpha Iota and he is currently the Vice-President of the College Band Directors National Association.
The Hartt Wind Ensemble
is nationally recognised as one of the premier collegiate wind ensembles in the US. In 2010 the ensemble made its Carnegie Hall debut in the Isaac Stern Auditorium, performing the world premiere of Dragon Rhyme by Chen Yi.
The Hartt Wind Ensemble has performed at national conferences of the College Band Directors National Association (CBDNA) in Ann Arbor, Michigan (2007), Seattle, Washington (2011), and Tempe, Arizona (2019). It has also performed four times at Eastern Division CBDNA regional conferences.
Critically acclaimed by Gramophone magazine, the ensemble has recorded three albums for Naxos: Passaggi (8.572109), Dragon Rhyme (8.572889) and Raw Earth (8.573342). A leader in commissioning new music, it has premiered over 40 works in the past 20 years and has hosted over 80 prominent guest performers and conductors.