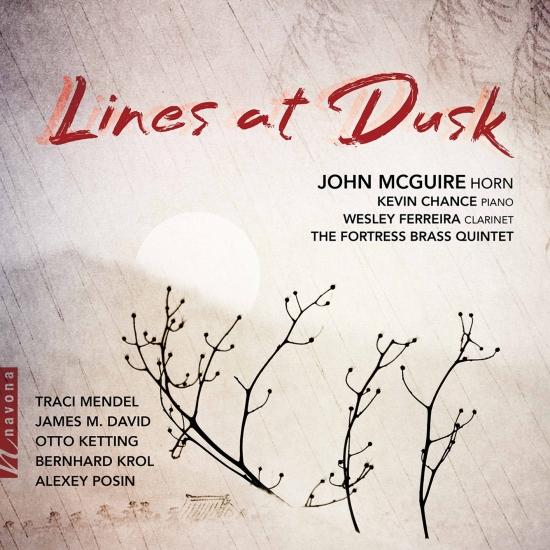 On LINES AT DUSK, acclaimed hornist John McGuire presents seven pieces, written by a variety of composers, with performances that are at once deep and expansive. The three movements of Landscapes, Series II, inspired by Japanese landscape paintings and woodcuts, travel from the dangerous mountains through the tranquility of the countryside and the bustling energy of a large city. It closes with an extended coda, with longer note values and a more sustained piano part that indicates a return to a calmer, more serene environment.
Beginning with Landscapes, Series II and throughout the album’s next three selections, McGuire is accompanied by pianist Kevin Chance. The duo’s performance on the programmatic Lines at Dusk: Hymn to the Rising Moon, which was inspired by two of Percy Bysshe Shelley’s poems, effectively utilizes harmonic color to convey atmosphere as well as emotion.
Nocturne was written by Traci Mendel for horn and piano for McGuire’s birthday in 2000. Embedded in the chords is the opening melody from Strauss’s Horn Concerto No. 1, which McGuire was working on at the time. The piece’s solemn, almost foreboding pace belies the composition’s celebratory inspiration.
On Bataque, McGuire and Chance are joined by Wesley Ferreira, one of the prominent clarinetists of his generation. “Bataque” refers to a genre of music and dance associated with coastal West Africa and Brazil, and this two-movement composition explores the heterophonic and call-and-response techniques of the genre. The first movement focuses on the tuneful melodies performed by the kantaderas (singers) while the second, more energetic movement captures the complex polyrhythms of the batukaderas (drummers.)
The album’s two solo pieces – Intrada and Laudatio – highlight McGuire’s ability to deliver revelatory performances that embody each composer’s inspiration. LINES AT DUSK closes with Brass Quintet No. 1, presented by the Fortress Brass Quintet, of which McGuire is a founding member. Opening with the energetic, inspiring “Allegro Vivo,” the piece’s three movements deliver a sense of enthusiastic forward momentum and emphatically conclude the album.
John McGuire, horn
Kevin Chance, piano
Wesley Ferreira, clarinet
The Fortress Brass Quintet 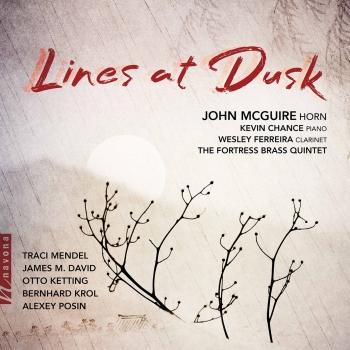 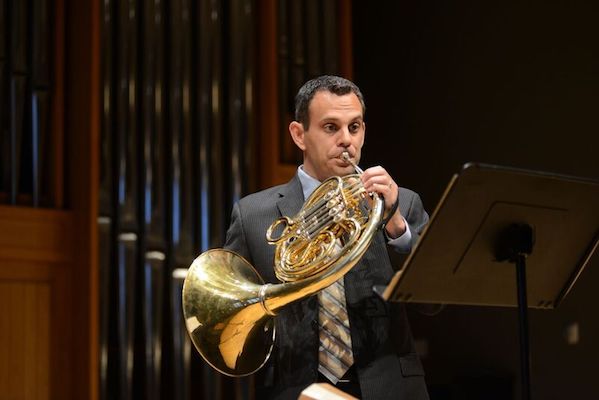 John McGuire
has a vast array of performance and teaching experiences. He has performed with many orchestras around the country, most notably the Dallas Symphony Orchestra, the Dallas Opera, the Fort Worth Symphony, the New World Symphony in Miami FL, the Civic Orchestra of Chicago, the Illinois Symphony Orchestra, and the Florida West Coast Symphony. McGuire has also toured internationally with the acclaimed Fortress Brass Quintet, of which he is a founding member.
As a soloist he was awarded the title “Yamaha Young Artist,” has been a finalist in the American Horn Competition, won several regional solo competitions, and has appeared as a guest artist at many workshops, festivals, and schools across the United States, United Kingdom, France, Brazil, Russia, Germany, Austria, Hungary, Slovakia, and Japan. With several world-premiere performances to his credit, McGuire is a passionate proponent for the creation of new solo horn literature and a sought-after contemporary music performer.
Prior to serving on the faculty of Colorado State University, McGuire served as Adjunct Instructor of Horn at the University of Alabama, Mississippi State University, Appalachian State University, Texas Woman’s University, the Music Institute of Chicago, and Florida A&M University. In addition, he served as host of the International Horn Competition of America in 2017 and 2019, one of the most prestigious solo horn competitions in the world, and currently serves on the Board of Advisors for IHCA. Today, many of McGuire’s former students have moved into successful careers as music educators in reputable school systems and have attained positions as orchestral performers in premier ensembles such as the Detroit Symphony Orchestra.
McGuire received his D.M.A. and B.M. in Music Performance from the University of Alabama, his M.M. in Performance from Florida State University, and a Performer’s Certificate from the Chicago College of Performing Arts at Roosevelt University in Chicago. His major professors were Charles “Skip” Snead, William Capps, and Dale Clevenger.
Kevin Chance
serves as Assistant Professor of Piano and chair of the Gloria Narramore Moody Piano Area at the University of Alabama. He maintains a studio of award-winning students at the pre-collegiate and collegiate levels, and in addition to being named the Alabama Music Teachers Association Teacher of the Year, he was recently named the 2019 Music Educator of the Year by the Tuscaloosa Council on the Arts and Humanities for his outstanding contributions to the Tuscaloosa community. Recently elected the Vice President of the Music Teachers National Association, he remains in demand as a teacher and clinician throughout the country, and he tours extensively throughout the United States and abroad as both soloist and collaborator. Chance holds degrees from the Eastman School of Music, Louisiana State University, and Birmingham-Southern College, where he was a student of Barry Snyder, Constance Knox Carroll, and William DeVan.
Wesley Ferreira
one of the prominent clarinetists of his generation, has been praised by critics for his “beautiful tone” and “technical prowess” (The Clarinet) as well as his “remarkable sensitivity” (CAML Review). Fanfare Magazine notes that Ferreira is “clearly a major talent.” He is Assistant Professor of Clarinet at Colorado State University. Ferreira has been the featured soloist with numerous wind bands and orchestras in North America and Europe, and has been broadcast nationally on both the Canadian and Australian Broadcasting Corporations. He has given performances and masterclasses at numerous colleges and universities throughout North America. His innovative teaching methods are acclaimed, including the development of the breath training program for musicians, Air Revelation Breath Support Training Program for Musicians ®. Ferreira holds degrees from Western University (B.M.) and Arizona State University (M.M. and D.M.A). He is a D’Addario and Selmer Paris Artist.