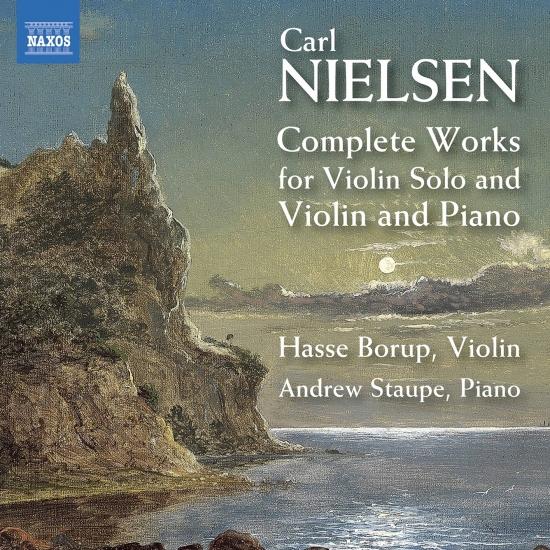 The music of Carl Nielsen holds a very special place for Danes, defining the nation’s musical voice for over a century and reflecting the soul of Denmark. Nielsen was a violinist from childhood, his early Sonata in G major having ‘a scent of Mozartian youth’, while the newly published Romance in G major was dedicated to his first teacher. Mature works include the Second Violin Sonata, ‘a work unparalleled in the sonata literature’, and the Prelude, Theme and Variations inspired by Bach’s Chaconne for solo violin. This collection represents the first ever recording of Nielsen’s complete music for violin solo or with piano.
"Andrew Staupe is a superb pianist who really digs into this music and presents it in its best light." (Lynn René Bayley, The Art Music Lounge)
"…Borup’s tone sounds considerably better in the previously unrecorded pieces, particularly in the Romance in G where he is quite acceptable indeed. This is a very fine piece, one that clearly belongs in the Nielsen canon. The a cappella polka is a cute piece which can always be played as an encore, Grüss is a more lyrical piece which sounds as if it is based somewhat on Danish folk music." (The Art Music Lounge)
Hasse Borup, violin
Andrew Staupe, piano (tracks 1-6, 20-24) 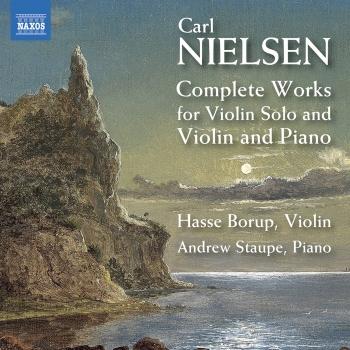 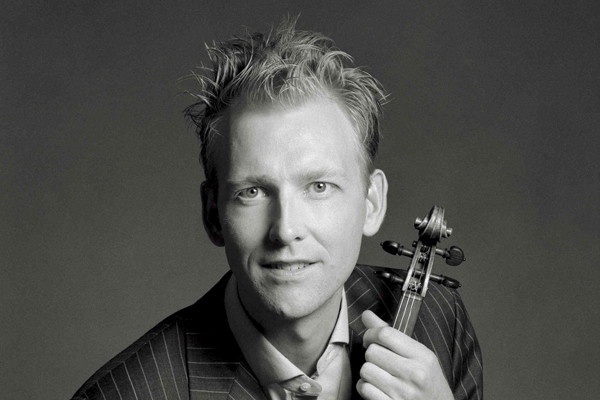 Hasse Borup
is Professor of violin and Head of String and Chamber Music Studies the University of Utah School of Music.
Dr. Borup has released recordings on Centaur, Naxos and Innova Labels: complete works for violin by Vincent Persichetti (Naxos 8.559725), the complete sonatas by the Danish romantic composer Niels W. Gade (Naxos 8.570524), and American Fantasies (Centaur 2918) both to critical acclaim (“Interpretative Empathy and Watertight Ensemble” - The Strad; “Landmark CD” – Musicweb; “Seamless playing” – allmusic.com). Tower of the Eight Winds, a CD on the Innova Label, featuring the complete works for violin by American composer Judith Shatin, was described by Fanfare Magazine as “..being played with superb agility by the Borup/Ernst Duo.”
Solo appearances include Vienna, Beijing, Washington DC, Venice, Cremona, Paris, Copenhagen and Miami. He was a founding member of the award-winning Coolidge Quartet, serving as the first ever Guarneri-Fellowship Quartet at University of Maryland. Dr. Borup has performed live on National Danish Radio, National Slovenian Radio, National Australian Radio, Radio Hong Kong, and has been featured on NPR’s “Performance Today.” In addition to numerous other prestigious prizes and fellowships, Borup was the only Dane to win the International Yamaha Music Prize. As an active educator,
Dr. Borup has written articles for The Strad and American String Teacher on topics ranging from violin acoustics to intonation. Dr. Borup is a frequent Guest Professor at the Saarburg Festival in Germany. From 2005-09, Dr. Borup directed the Chamber Music Institute at the Music@Menlo Festival in California and has, since 2009, directed the University of Utah Chamber Music Workshop. The major project to record the complete works for violin solo and violin and piano by Carl Nielsen – a joint project with the National Danish Academy of Music, Royal Danish Library and Naxos was released in late 2020.
Dr. Borup’s main teachers were Arnold Steinhardt, Philip Setzer, David Takeno, Almita Vamos, David Salness and Peder Elbaek. He also worked extensively with The Guarneri, Emerson and Juilliard Quartets, Isaac Stern, Bill Preucil and Hatto Beyerle. He has earned degrees in violin performance from the Royal Danish Conservatory of Music, the Hartt School of Music, and a Doctor of Musical Arts Degree from the University of Maryland. He plays a copy of the Plowden Del gesu made by Samuel Zygmuntowicz and a copy of the Soil Strad made by Ryan Soltis.