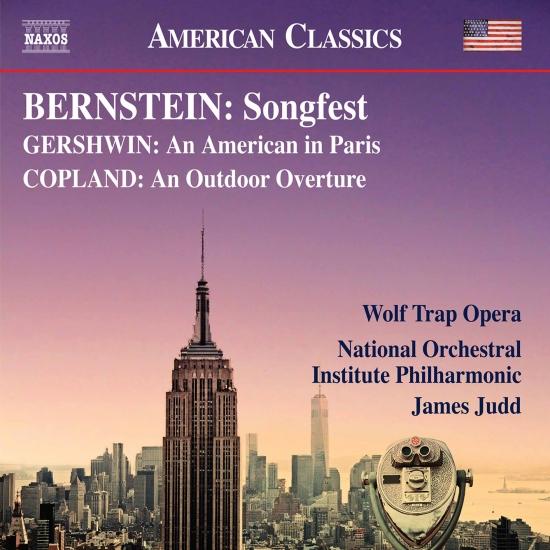 An American in Paris is one of Gershwin’s most vivacious works, an orchestral ballet saturated in homesickness and the blues. This recording, however, uses the new 2019 critical edition and offers Gershwin’s original orchestration, unheard for 75 years – leaner, more angular and transparent, it also employs the correct use of the iconic taxi horns, for a new sonic experience. The breezy vitality of Copland’s An Outdoor Overture is balanced by Bernstein’s Songfest – written to celebrate the Bicentennial Year in America, setting the verses of 13 of the country’s poets.
Conductor James Judd is a significant Naxos artist who has demonstrated his authority on American repertoire with numerous previous releases. His latest recording opens with Gershwin's An American in Paris, performed in the new 2019 critical edition that uses the composer's original orchestration, unheard for 75 years. Copland's An Outdoor Overture follows, a bright and open triumph of Americana. Topping the bill is Bernstein’s celebratory Songfest with a superb line-up of vocalists. The work was written to mark the Bicentennial Year in America.
James' flair is well complemented by the gifted young American musicians of the National Orchestral Institute Philharmonic in a release that is guaranteed to prove yet another winner for them.
Kerriann Otaño, soprano
Taylor Raven, mezzo-soprano
Zoie Reams, mezzo-soprano
Alexander McKissick, tenor
Joshua Conyers, baritone
Patrick Guetti, bass
Wolf Trap Opera 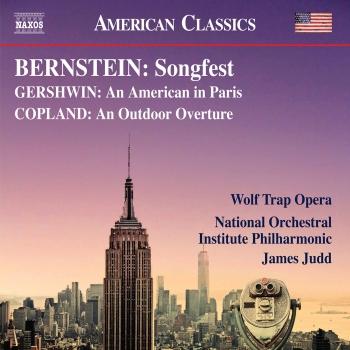 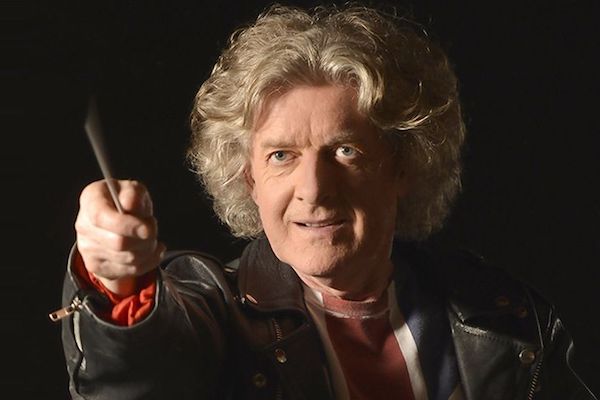 James Judd
British born conductor James Judd is sought after for both his passionate musicianship and his charismatic presence on and off the podium. Known for his extraordinarily communicative style and bold, imaginative programming, repeat engagements in concert halls from Prague to Tokyo, from Istanbul to Adelaide, attest to his rapport with audiences and musicians alike.
A graduate of London’s Trinity College of Music, Mr. Judd came to international attention as the Assistant Conductor of the Cleveland Orchestra at the invitation of Lorin Maazel, and appointed Associate Music Director of the European Community Youth Orchestra by Claudio Abbado. Since then, James Judd has led the Berlin Philharmonic and the Israel Philharmonic Orchestras; he has conducted in the great concert halls of Europe as the Salzburg Mozarteum and Vienna’s Musikverein; and made guest appearances with orchestras as the Vienna Symphony, Gewandhaus Orchestra of Leipzig, Prague Symphony, Orchestre National de France, Orchestre de la Suisse Romande, Zurich Tonhalle Orchestra, the Monte Carlo Symphony, the Brussels Philharmonic, Rotterdam Philharmonic, Seoul Philharmonic, Japan’s NHK Orchestra and the Mozarteum Orchestra of Salzburg, and the major British ensembles as the City of Birmingham Symphony Orchestra, the London Philharmonic, the Royal Philharmonic Orchestra, the Hallé Orchestra, the BBC National Orchestra of Wales, and the English Chamber Orchestra. He was co-founder of the Chamber Orchestra of Europe, which he led on tours throughout the United States, the Far East and Europe. In North America he is a frequent guest conductor with the orchestras of St. Louis, Montreal, Cincinnatti, Pittsburgh, Dallas, Seattle, Indianapolis, Utah, Vancouver and Ottawa. As opera conductor, he has appeared with the English National Opera conducting productions of Il Trovatore, La Traviata, Il Barbiere di Siviglia, Rigoletto, and Le Nozze di Figaro; and at the Glyndebourne Opera Festival in Rossini’s La Cenerentola. James Judd also served as Artistic Director of the Florida Grand Opera from 1993-1996.
During his eight years as Music Director of the New Zealand Symphony Orchestra, Judd brought the ensemble to a new level of visibility and international renown with acclaimed recordings for the Naxos label of works by Copland, Bernstein, Vaughan Williams, Gershwin and many others. Other music directorships have included Principal Guest Conductor of the Orchestre National de Lille in France and a groundbreaking 14 years as Music Director of the Florida Philharmonic Orchestra.
An outstanding exponent of the works of Gustav Mahler, Judd’s performances of this composer have been praised the world over. His recording of Mahler’s Symphony No. 1 was awarded the Gold Medal by France’s Diapason as well as the Toblacher Komponierhäuschen for the best Mahler recording of the year. His live recordings of Mahler’s Symphonies No. 9 with the Gustav Mahler Youth Orchestra and No. 10 with the European Community Youth Orchestra received enthusiastic international praise, and his performance of Elgar’s Symphony No. 1 with the Hallé Orchestra is still a highly-regarded reference standard today. He recorded Brahms symphonies with the Royal Philharmonic and works by Copland, Steve Reich, Takemitsu, Gershwin, Bernstein and Bernard Herrmann as well as works by British composers such as Elgar, Lilburn, Vaughan Williams, Tippett and many others. Judd’s many orchestral recordings are also featured on the Decca, EMI and Philips labels and the complete operas by Meyerbeer and Donizetti on the Opera Rara label.
Recent concert highlights have included performances of Britten’s War Requiem in Bucharest and Bernstein’s Mass at the Radio France Festival, staged performances of Carmina Burana at the ruins of Masada, a concert with the Monte Carlo Philharmonic Orchestra at the Royal Palace in Monaco, a month long tour with the New Zealand Symphony Orchestra and a tour of Asia celebrating the 25th anniversary of his Asian Youth Orchestra as well as concerts with the Philadelphia Chamber Orchestra, the Slovenian National Orchestra, the Noord Nederlands Orchestra and Vadim Repin, and three concerts in Berlin as part of the celebrations of Yehudi Menuhin’s centenary in the famous Konzerthaus.