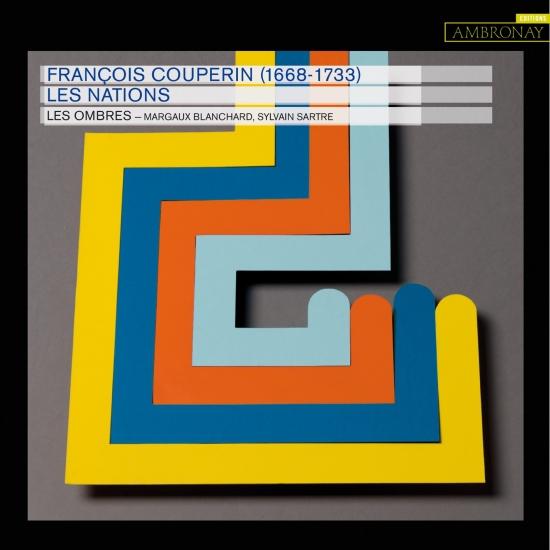 With this newly researched recording of Couperin's Les Nations, Les Ombres, a Baroque ensemble of the new European generation, boldly cross borders and barriers to share a vision of spiritual union beyond national divide.
Couperin was the very first composer in France to produce a trio sonata in the style of Corelli, which he composed when he was barely 22-years old. Not daring at first to declare openly his admiration for the Italian genius, he did not sign his own name to 'L'Astrée', written around 1691. It was finally published in 1726, in the collection known as 'Les Nations', where it became the opening 'sonade' of La Piémontoise. To serve as the sonades of 'La Françoise' and 'L'Espagnole', he also reused two early works 'La Pucelle' and 'La Visionnaire'. Only the sonade of 'L'Impériale' was wholly composed around 1726. Each sonade is followed by a suite of dances in the French style, in the course of which the composer elaborates upon his mastery of ornamentation and interweaving lines. The assembly process is a success, and 'Les Nations' constitutes a single gesture: the ultimate réunion of all the output of François Couperin, from his tenderest youth to his ripest maturity.
The entrance of 'L'Impériale' glitters with a splendour we have never before encountered in the French master. He succeeds in fostering the illusion that he has submitted to the discipline of the sonata da chiesa all his life. The mastery of German counterpoint and the first stirrings of the galanterie later to characterise the Mannheim School make 'L'Impériale' the most modern of the four Nations. In homage to this stylistic highpoint, Les Ombres asked Benjamin Alard to record Bach's organ transcription of the 'Légèrement' of the sonade from 'L'Impériale'. This Aria in F major thus hints at an imaginary encounter between the two composers.
A Baroque ensemble of the new generation, Les Ombres was founded by Sylvain Sartre and Margaux Blanchard in 2006 with the aim of closely linking musicological research and 'historically informed' performance. The group is strongly committed to young audiences, and places transmission at the heart of its artistic strategy. The first recording of Les Ombres, 'Concert chez la Reine' (AMY301) was released in 2010 and garnered much critical accclaim: ffff in Télérama, 3 stars in Classica, Top 5 on Classiquenews, 5/5 on Muse baroque.
The musical source used for this recording is the score published in separate parts by Boivin and engraved by L.H. Hüe in Paris in 1726, now held in the Bibliothèque Nationale de France. The so-called 'Lyon' and 'Paris' manuscripts containing the first versions of the sonades enabled us to make a comparative study of ornamentation, articulation and figuring, while keeping a certain critical distance from these in the light of Couperin's own warning in his preface of 1726 to Les Nations: 'There have been a number of manuscripts in circulation in which I place little faith because of the negligence of the copyists.'
Les Ombres
Margaux Blanchard, viola da gamba
Benjamin Alard, organ