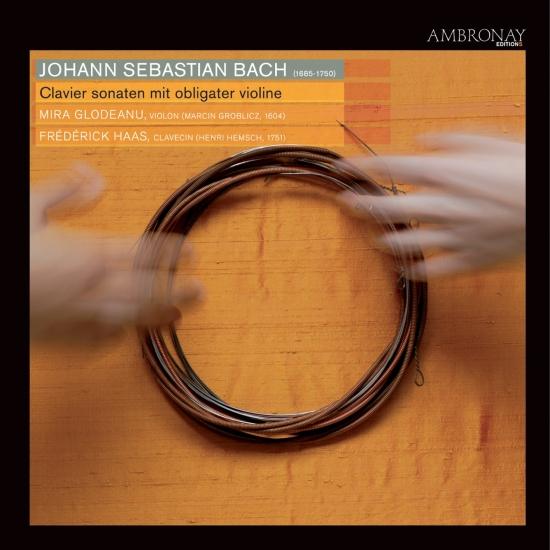 Miracles of balance, labyrinths of creativity, gestures of the spirit, Bach's six Sonatas for violin and harpischord are almost of our time. Richness of emotion, mastery of technique and texture... Music of imagination and art... Played by Mira Glodeanu and Fédérick Haas, using two exceptional period instruments, a 1604 Grobliz and 1751 Hemsch, here is Bach's most precious ensemble gift to violinists and harpischordists.
“The low tuning (405 hz) and generous acoustic make listening a heart-warming, unalloyed pleasure. Both musicians have played the cycle often in concert, as is demonstrated by the uncanny communication between them.” (Carlos Maria Solare, The Strad)
Mira Glodeanu, violin
Frédérick Haas, harpsichord 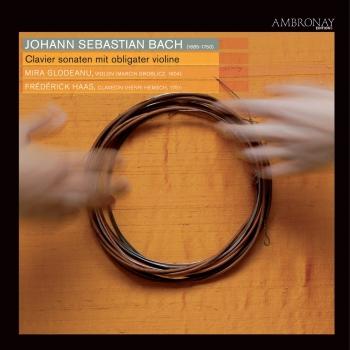 Mira Glodeanu
Born in Bucarest in 1972, Mira Glodeanu was formed within the Romanian violin school by the masters Nicolae Bilciurescu, Modest Iftinchi, as well as the violinists of the Voces Quartet. She attained the soloists diploma from the Academy of Music in Bucarest with the highest distinction. She soon became interested in early music, and in 1993 participated in the formation of a group in Bucarest involved in research and interpretation. She later came in contact with a number of outstanding figures representing different styles: Jordi Savall, Manfredo Kremer, and Sigiswald Kuijken with whom she came to study at the Koninklijk Conservatorium de Bruxelles and obtained a performing degree on baroque violin.
Mira Glodeanu has performed as a soloist throughout Europe, in Canada, Japan, and Latin America with numerous chamber ensembles and baroque orchestras: La Petite Bande, Les Arts Florissants, La Fenice, Il Seminario Musicale, Il Gardellino, Arpeggiata, Le Poème Harmonique... She is regularly invited as concertmaster of the orchestra of Collegium Vocale Ghent, Les Agremens (Namur), Al Ayre Espagnol (Zaragoza). She has recorded over thirty discs with Philippe Herreweghe, Gerard Lesne, Veronique Gens, William Christie, Christophe Rousset, Sigiswald Kuijken...
Her keen interest in French music of the 18th century lead her to rediscover the violin sonatas of Francois Francœur of which she has made a world premiere recording with Ausonia: "Mira Glodeanu embraces this music with a warm intensity; she exploits it's rythmic resources to the point of delirium. Tranported by an irrepressible intensity, the romanian violinist exalts this music without timidity or heaviness. Her exuberant style is in perfect harmony both with the spirit of these works and their time."(Diapason). A new volume of these sonatas, integrated with arias for soprano taken from operas by Francœur appeared on the Alpha label in 2005: "As for Mira Glodeanu, we find in tact once again her fervour, her compelling sonority, her rustic bow, and her heightened sense of mood as evident in the drunkenness of the adagios as in the joys of the finales" (Diapason).
Mira Glodeanu is professor of baroque violin at the Conservatoire Royal de Bruxelles, as well as giving master classes in France (Sablé), Spain, Romania and England. She is also guest professor at the University of Salamanca.
She performs on a violin by Augustin Chappuy (Paris, 1750), preserved in it's original condition, and a rare violin by Marcin Groblicz (Krakow,1604).