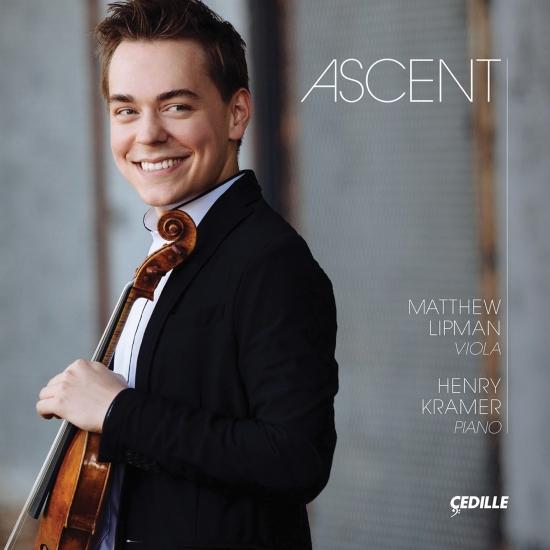 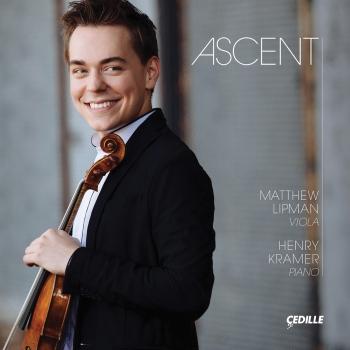 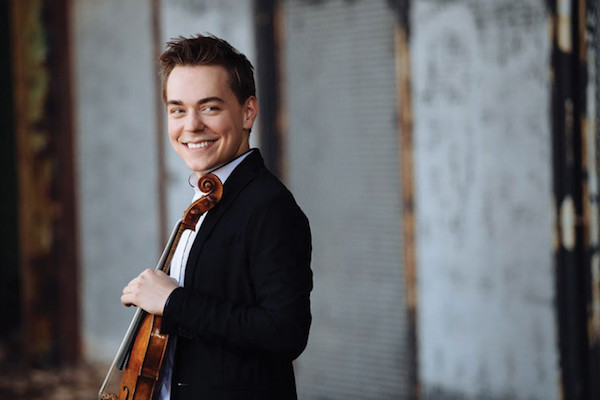 Matthew Lipman
One of the world’s leading young violists, 26-year-old American Matthew Lipman has been hailed by The New York Times for his “rich tone and elegant phrasing” and by the Chicago Tribune for his “splendid technique and musical sensitivity.” The recipient of a prestigious 2015 Avery Fisher Career Grant, he has appeared as soloist with the Minnesota, Illinois Philharmonic, Grand Rapids Symphony, Wisconsin Chamber, Juilliard, Ars Viva Symphony, and Montgomery Symphony orchestras; with the Chamber Music Society of Lincoln Center in Alice Tully Hall; and in recital in Lincoln Center’s Rose Studio, the WQXR Greene Space in New York City, and at the Phillips Collection in Washington, DC.
Ascent is Matthew Lipman’s debut solo album. The Telegraph praised Lipman as “gifted with poise and a warmth of timbre” for his recording of Mozart’s Sinfonia Concertante with violinist Rachel Barton Pine, the Academy of St. Martin in the Fields, and Sir Neville Marriner (Avie), which topped the Billboard charts. He was the only violist featured on WFMT Chicago’s list of “30 Under 30” of the world’s top classical musicians and has been profiled by The Strad and BBC Music magazines. Mr. Lipman performs internationally as a chamber musician with the Chamber Music Society of Lincoln Center, and regularly at the Music@Menlo, Marlboro, Ravinia, Bridgehampton, Seattle, Cleveland, and White Nights festivals. A top prizewinner of the Primrose, Tertis, Washington, Johansen, and Stulberg International Viola Competitions, Lipman received his bachelor’s and master’s degrees as an inaugural Kovner fellow from The Juilliard School as a student of Heidi Castleman, and was further mentored by Tabea Zimmermann at the Kronberg Academy. A native of Chicago, Lipman is on faculty at Stony Brook University and performs on a fine 1700 Matteo Goffriller viola loaned through the generous support of the Rachel Barton Pine Foundation.
Henry Kramer
Winner of the Second Prize at the 2016 Queen Elisabeth Competition and of the 2015 William Petschek Recital Debut Award from The Juilliard School, pianist Henry Kramer is establishing himself as one of the most exciting American musicians of his generation. His performances have been praised as “triumphant” and “thrilling” (The New York Times), and “technically effortless” (La Presse, Montreal). A Maine native, Mr. Kramer has also earned top prizes in the 2015 Honens International Piano Competition, 2011 Montreal International Music Competition, and 6th China Shanghai International Piano Competition. He was a laureate of the 2017 American Pianist Association Awards, a prizewinner in the 8th National Chopin Competition in Miami, and received the 2014 Harvard Musical Association Arthur Foote Award. He is also a winner of Astral’s 2014 National Auditions.
Mr. Kramer has been invited to play with orchestras across the globe including the National Belgian Orchestra, Brussels Philharmonic, Calgary Philharmonic, Shanghai Philharmonic, Bilkent Symphony Orchestra in Ankara, Turkey, the Portland (Maine) Symphony Orchestra, the Orchestre Métropolitain du Montreal, and the Yale Philharmonia. He has soloed under the batons of preeminent conductors Marin Alsop, Jan Pascal Tortelier, and Stéphane Dénève. Mr. Kramer has been a guest performer in recitals at Portland Piano International (Oregon), The Cliburn Foundation, and the National Chopin Foundation in Miami and prominent venues such as Carnegie’s Zankel and Weill Halls, the Amsterdam Concertgebouw, Queen Elizabeth Hall in Antwerp (Belgium), and BOZAR in Brussels. Deeply committed to the chamber music repertoire, he has been featured in performances at Lincoln Center and participated in the Steans Institute at the Ravinia Festival, La Jolla Music Society Summerfest, Music@Menlo’s International Program, and the Verbier Festival Academy, where he was awarded the Tabor Prize in piano.
Mr. Kramer holds both a Master’s and Bachelor’s degree from The Juilliard School and an Artist Diploma from the Yale School of Music, where he received the Charles S. Miller Prize for the most outstanding first-year pianist. He currently holds the L. Rex Whiddon Distinguished Chair in Piano at Columbus State University Schwob School of Music in Georgia. His musical mentors have included Julian Martin, Robert McDonald, and Boris Berman. His first commercial recording, dedicated to Liszt oratorio transcriptions, was recently released on the NAXOS label.
Clarice Assad
One of the most widely performed composers of her generation, Clarice Assad is a Grammy-nominated Brazilian-American composer, pianist, arranger, and singer of musical depth and versatility. Her mission is to connect, inspire, and empower people through music.
Assad’s compositions include pieces for a variety of instrumentations, including smaller works for piano and guitar, works for large and small chamber ensembles, and 15 orchestral works. Although the ensembles she writes for are mostly classical, her voice as a composer has been heavily influenced by Brazilian music, jazz, and world music. Assad's keen sense of orchestration carefully curates some of the most effective techniques of great orchestrators of the past, while retaining a personal, unique fingerprint that’s compelling and dramatic in its construction.
Her music has been commissioned by Carnegie Hall, the Chamber Music Society of Lincoln Center, Orquestra Sinfônica de São Paulo, General Electric, Sybarite5, Cedille Records, and the Vail and La Jolla Music Festivals, to name a few. Her works have been recorded by some of the most prominent names in classical music including Dame Evelyn Glennie, Yo-Yo Ma, Nadja Salerno-Sonnenberg, and Liang Wang. She has served as a composer-in-residence for the Albany Symphony and Cabrillo Festival of Contemporary Music and was composer-in-residence for the New Century Chamber Orchestra for a decade. Assad is the recipient of numerous awards including the Aaron Copland Award, Van Lier Fellowship, NPR’s All Songs Considered, and the Mcknight Visiting Composer Fellowship and is the founder of VOXploration, an award winning research-based workshop on spontaneous music creation that requires participants to use only their voices and bodies as musical instruments.