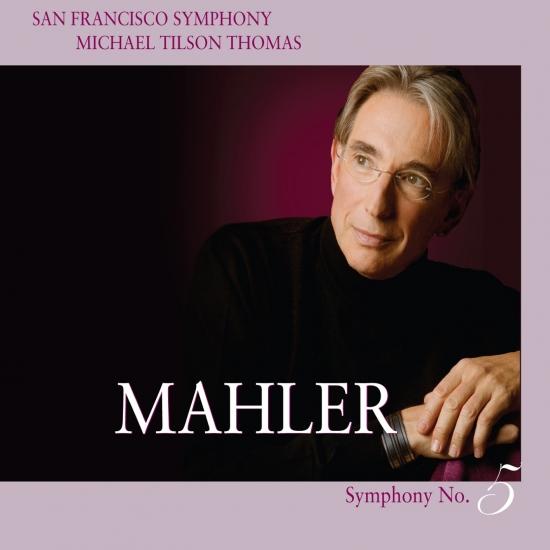 One of today’s most significant recording cycles continues with Michael Tilson Thomas and the San Francisco Symphony offering the eighth instalment in their award-winning cycle of Mahler Symphonies, the ever-popular Fifth.
Mahler's Fifth Symphony is all about action. It was his breakthrough work--a "foaming, roaring, raging sea of sound," he called it, a work of "dancing stars." The famed Adagietto was inspired by Mahler's love for his young wife Alma.
The project’s uncommon critical and commercial success have brought the exceptional conductor-orchestra partnership two Grammy Awards and numerous citations throughout the world. Every release has entered the Top Ten of the Billboard Classical Chart. MTT has distinguished himself as one of the world’s foremost Mahler interpreters, and through his signature performances, as one of the composer’s most compelling advocates. In 2005 his achievements were recognised by The Gramophone who named him Artist of the Year.
“extraordinarily cogent performance … spectacularly well recorded … this is the recording to buy” (International Record Review)
In 1901, Mahler was acutely conscious of taking a new path. After a run of eccentric symphonies, he came back to a more “normal” design, one that could be described as concentric as well as symmetrical. The Second, Third, and Fourth symphonies had included singing, but the Fifth is an instrumental conception. The music is also leaner and harder. When he began work on the Fifth Symphony, Mahler had acquired the complete edition of Bach, and his excited discovery of what was in those volumes led him to create more polyphonic textures in his own music. But this new “intensified polyphony,” as Bruno Walter called it, demanded a new orchestral style, and that did not come easily. Mahler conducted the premiere of the Fifth Symphony with the Gürzenich Orchestra in Cologne on October 18, 1904, but he made alterations until at least 1907 (his final version, which is what you hear in this recording, was published for the first time in 1964 by the International Gustav Mahler Society, Vienna).
"Heavens, what is the public to make of this chaos in which new worlds are forever being engendered, only to crumble into ruin the next moment?" Mahler wrote his wife, Alma, after the first rehearsal. "What are they to say to this primeval music, this foaming, roaring, raging sea of sound, to these dancing stars, to these breathtaking, iridescent, and flashing breakers?” For the composer Ernst Krenek, the Fifth Symphony is the work with which Mahler enters "upon the territory of the 'new' music of the twentieth century." (excerpt from liner notes by Michael Steinberg)
San Francisco Symphony Orchestra
Michael Tilson Thomas, conductor
Recorded live at Davies Symphony Hall, San Francisco, September 28–October 2, 2005

Tilson Thomas: From the Diary of Anne Frank & Meditations on Rilke