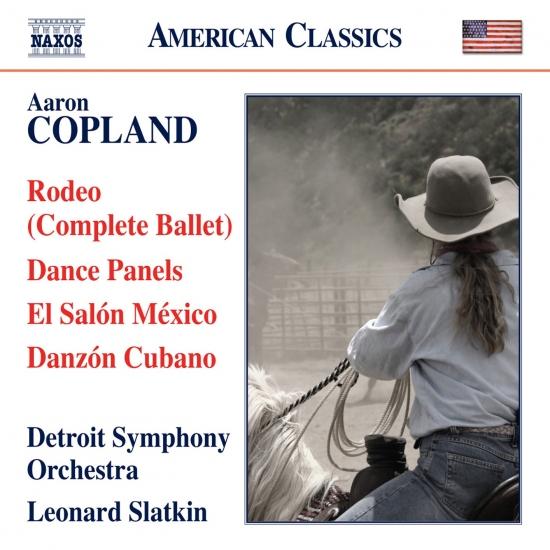 "Maybe American music does not travel all that well, for time and again you find their orchestras taking top spot when comparing available performances. And as if to make the point, this is Naxos’s third recording of the Rodeo from orchestras on that side of the Atlantic. They get better each time, the sheer and easy virtuosity of the Detroit players as they wind-up the excitement of the final Hoe Down, or provide a lazy view of the Corral Nocturne, takes the performance to my top spot of the many available. I suppose the sleeve is correct in its comment that Dance Panels is barely known, but I have lived and loved the music for so long that it appears familiar, and I commend it to you, the extended ballet score containing some of Copland’s most beautiful melodies. Far removed from the ‘brashness’ of Rodeo, the music is gentle and often quiet, the many solos including a particularly beautiful one for flute appearing in the opening of the slow fourth section. The album ends with two of the composer’s ‘pop’ classics in which he milks local colours and dance rhythms. Again you have to admire Leonard Slatkin’s direction which never goes outside the limits of good taste, something that many other conductors cannot resist. Very good sound quality, and at the super-budget price, Naxos are giving it away. Dash out and buy it." (David’s Review Corner)
"While Copland’s hugely successful celebration of the American West, Rodeo, has become an American classic, Dance Panels is barely known despite working beautifully as a concert work. Based on popular Mexican melodies, the glittering, even exotic El Salón Mexico is one of Copland’s most frequently performed works. Of his rhythmically complex Danzón Cubano, inspired by a visit to a dance hall in Cuba, in which there were two orchestras playing at both ends, the composer himself wrote: “I did not attempt to reproduce an authentic Cuban sound but felt free to add my own touches of displaced accents and unexpected silent beats.” GRAMMY® Award-winning conductor Leonard Slatkin’s recording of Copland’s Lincoln Portrait (8.559373–74) received “the kind of performance that brought tears to my eyes”. (Audiophile Audition)
Detroit Symphony Orchestra
Leonard Slatkin, conductor
Recorded at the Orchestra Hall at the Max M. Fisher Music Center, Detroit, USA, from 9th to 11th November, 2012 (tracks 1-4), and from 12th to 14th October, 2012 (tracks 5-13)
Produced by Blanton Alspaugh (Soundmirror, Inc.)
Engineered by Matt Pons (Detroit Symphony Orchestra)
Mixed and Mastering by Mark Donahue (Soundmirror, Inc.)