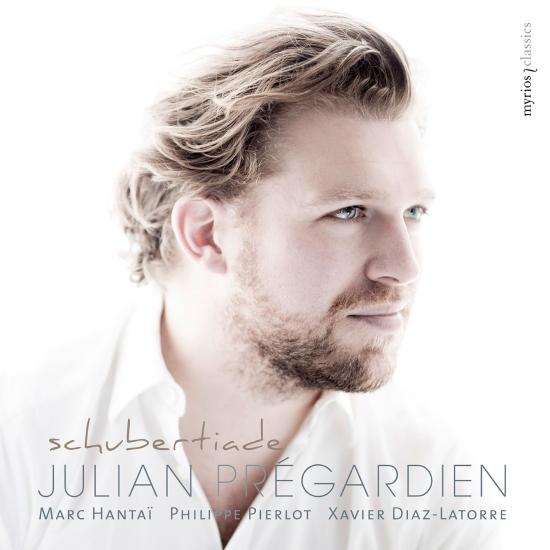 In their Schubertiade, Julian Prégardien and his instrumental friends recreate the special artistic mood one could have felt in Schubert’s day in a Vienna salon. To evoke that atmosphere, they have created a new collage of musical and literary fragments associated with the composer, featuring the unusual combination of flute, baritone and guitar.
Three experienced early music specialists with the best credentials – Philippe Pierlot, Marc Hantaï and Xavier Diaz-Latorre, known from the Ricercar Consort, Le Concert des Nations and Les Arts Florissants – gather as a fine instrumental ensemble around one of the young singers most in demand on the current musical scene. With them, he presents his new SACD album “Schubertiade” on the Cologne myrios classics label. Well-known Schubert songs such as Heidenröslein, the Harpist’s Song and Schwanengesang alternate here with dances and short instrumental pieces.
"a captivating and most artfully programmed recital in which Pregardien’s tenor is lightly suspended over a guitar’s gentle strumming" (BBC Music Magazine)
"what a beautiful piece of chamber music that is, the way they performed that; they’ve matched their sounds absolutely magically and they transport us from a completely different place from where we expect to be when we put our disc of Schubert Lieder into the player, so all credit to them for making something so persuasive … it is very, very stylish and sensitive and intelligent music making, and it is very compelling."
Julian Prégardien, tenor, recitation
Marc Hantaï, transverse flute
Philippe Pierlot, baryton
Xavier Diaz-Latorre, guitar 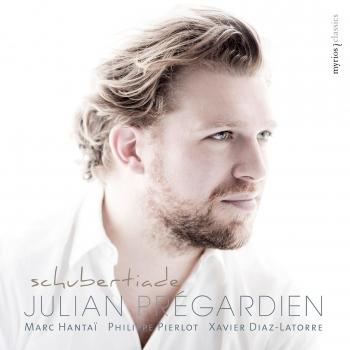 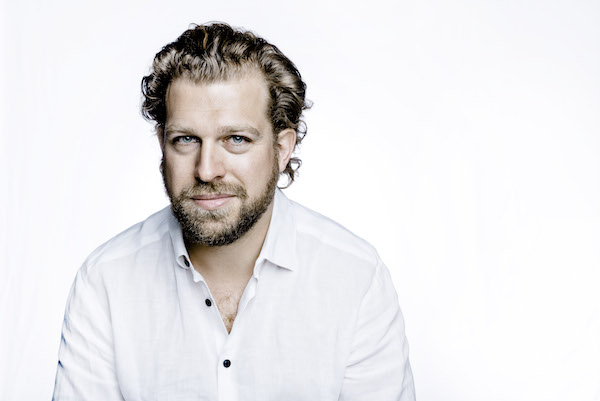 Julien Prégardien
was born in Frankfurt and received his earliest music training in the choirs of Limburg Cathedral. After studying in Freiburg and joining the academy of the Aix-en-Provence opera festival, he was a member of the Frankfurt Opera ensemble from 2009 to 2013. At the same time, he developed an international career as a concert performer. Today, the tenor is an outstanding representative of the younger generation of singers.
As an opera singer, he has appeared at the Festival d’Aix-en-Provence, at the Hamburg and Bavarian State Operas and at the Opéra Comique in Paris. In 2018 he made his debut at the Salzburg Festival as Narraboth in Richard Strauss’ Salome (director: Romeo Castellucci) with the Vienna Philharmonic conducted by Franz Welser-Möst. In 2019 this was followed by his debut as Tamino in a new production of Mozart’s Die Zauberflöte at the Berlin State Opera under the baton of Alondra de la Parra. At the Mozartwoche 2023 he will be heard for the first time as Don Ottavio in two semi-staged performances of Mozart's Don Giovanni conducted by András Schiff, and at the Teatro San Carlo in Napoli he will be seen in the staged version of Romeo Castellucci's Mozart Requiem conducted by Raphaël Pichon.
Julian Prégardien was "Artiste Ètoile" of the Mozartfest Würzburg in 2019, where he performed with the Freiburg Baroque Orchestra and the Bamberg Symphony Orchestra, among others. Recent highlights include a tour with Concentus Musicus under Stefan Gottfried, his debut with the Cleveland Orchestra under Franz Welser-Möst, and his Carnegie Hall debut with Orchestra St. Luke's under Bernard Labadie. In the 2021/2022 season Julian Prégardien was heard with the Oslo Philharmonic Orchestera under Klaus Mäkelä, with the Symphonieorchester des Bayerischen Rundfunks under Sir John Eliot Gardiner, with the Tonhalle Orchester and Alondra de la Parra, as well as with the Ensemble Pygmalion under Raphaël Pichon.
Highlights of the 2022/2023 season include Schubert's Mass in E-flat Major conducted by Franz Welser-Möst at the Salzburg Festival, Beethoven's IX. Symphony with the SWR Symphony Orchestra under Jean-Christophe Spinosi, Schubert's Mass in E-flat Major with the Swedish Radio Symphony Orchestra under András Schiff, as well as with the Cleveland Orchestra under Franz Welser-Möst, Mozart's Requiem with the Concertgebouw Orkest under Klaus Mäkelä, Bach's St Matthew Passion with the Vienna Philharmonic under Franz Welser-Möst, Bach's St John Passion with the Gewandhaus Orchestra under the Thomaskantor Andreas Reize, and a tour of Handel arias together with La Cetra under Andrea Marcon.
A special focus of Julian Prégardien's artistic activities are song recitals and chamber music projects. For example, he curates a Brahms evening as part of the Schleswig-Holstein Festival and gives recitals at the Konzerthaus Dortmund, the Kölner Philharmonie, the Alte Oper Frankfurt, the Amsterdam Concertgebouw, Ittingen, Gent, Lille, Bari and La Chaux-de-Fonds.
Julian Prégardien records exclusively for the label Alpha Classics. He is a professor at the Munich Academy of Music and Theatre’s vocal department, a member of the Schumann Network and artistic director of the Brentano Academy in Aschaffenburg.