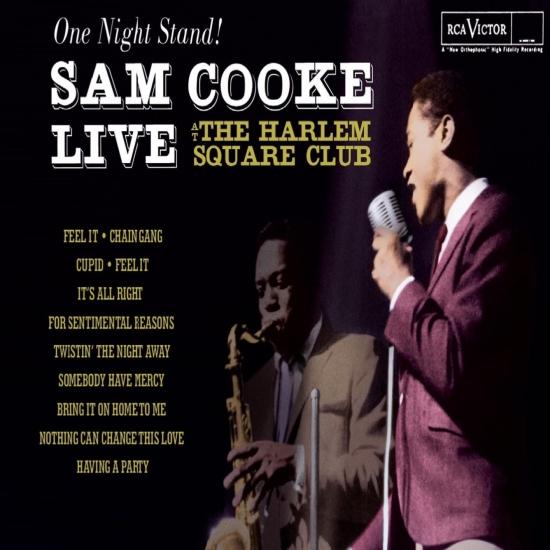 Sam Cooke's reputation as a brilliant singer is sometimes maintained in spite of some of his records, not because of them. Hugo and Luigi, his RCA producers, often drowned Cooke's stunning pipes in an ocean of inappropriate orchestras and choirs. But compare their single version of 'Chain Gang' to the stripped-down, gently swaying, and considerably more heartfelt live version on LIVE AT THE HARLEM SQUARE CLUB; no doubt about it, Cooke was a master, and if his producers had been a bit more sympathetic, his stature would be even higher now than it is.
Recorded in Florida in 1963, just over a year before his murder, this 10-track set puts Cooke in front of a small combo and just lets the man go. Every track is a small masterpiece of soul phrasing, and the band is more than up to Cooke's vocal prowess. Listen and be amazed.
„Not only is this one of the greatest live soul albums ever released, it also reveals a rougher, rawer, and more immediate side to Sam Cooke that his singles only hinted at, good as they were. Working with a merged band that included guitarist Cliff White and drummer Albert 'June' Gardner from Cooke's regular touring outfit and saxophonist King Curtis and his band, Cooke brings a gospel fervor to these whirlwind versions, which are fiery, emotionally direct, and hit with uncommon power. Every track burns with an insistent, urgent feel, and although Cooke practically defines melisma on his single releases, here he reaches past that into deeper territory that finds him almost literally shoving and pushing each song forward with shouts, asides, and spoken interactions with the audience, which becomes as much a part of this set as any bandmember. 'Chain Gang' is stripped down to a raw nerve, 'Twistin' the Night Away' explodes out of the gate like a runaway rocket, and Curtis' sax breaks on 'Somebody Have Mercy' make it sound like the saxophone was invented for this one song alone. Throughout Cooke's voice is a raspy laser that makes it obvious what Rod Stewart picked up from this recording, and it is impossible not to hear Cooke's voice looming behind Stewart's once you've heard this amazing live set. Although recorded January 12, 1963, at the Harlem Square Club in Miami in 1963, RCA didn't release it as an album until 1985. The set was remixed from the original first generation three-track tape for 2000's The Man Who Invented Soul box, and while the music (and Cooke's vocals in particular) sounded much cleaner, much of the crowd noise from the 1985 mixes was toned down, robbing the recording of some of its claustrophobic, frenzied power. The mix used here seems to more or less split the difference, but the crucial key is and was always Cooke's vocals, and while he was a marvelously smooth, versatile, and urbane singer on his official pop recordings, here he explodes into one of the finest sets of raw secular gospel ever captured on tape. It is essential listening in any version.“ (Steve Leggett, AMG)
Sam Cooke, vocals
Clifton White, guitar
Cornell Dupree, guitar
Jimmy Lewis, bass
Albert “June” Gardner, drums
George Stubbs, piano
King Curtis, saxophone
Tate Houston, saxophone
Recorded January 12, 1963 at Harlem Square Club, Miami, Florida
Engineered by Bob Simpson, Tony Salvatore, Steve Rosenthal
Produced by Hugo & Luigi
Digitally remastered