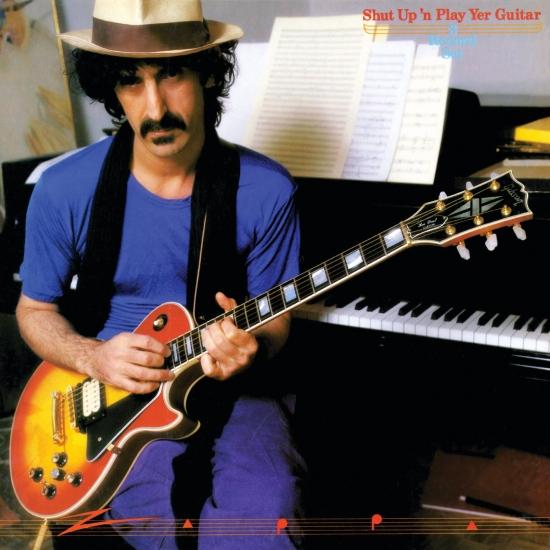 100% guitar solos. The Rosetta Stone for axe players. Everyone else will be illuminated by the blindly exquisite improvised compositions, mostly culled from live performances 1979-80.
Backed by a host of different bands, Zappa makes his instrument express stuff more blasphemous than any mere words could convey. "Five-Five-Five" and "Hog Heaven" draw his most brutal and metallic tones; "Ship Ahoy" puts Zappa's distorto-funk shuffle over a cooking rhythm section. "Canarsie" lays Zappa's sinuous SG against bizarre rhythm passages featuring Warren Cucurullo's sitar. "Treacherous Cretins" finds him soloing over a reggae riff; "Variations on the Carlos Santana Secret Chord Progression" lives up to its title with the band aping a Latin percussive groove; "Beat It With Your Fist" is two minutes of maximum-velocity metal. But there's also some prettier moments here, like the reflective "Pink Napkins" and "Canard du Jour," an improvised duet with FZ on bouzouki and Jean-Luc Ponty on violin.
"While most of the discussions of Frank Zappa have to do with his satirical and off-color lyrics, the fact remains that he was one of the finest and most underappreciated guitarists around. This collection places the spotlight squarely on Zappa's mastery of the guitar. Recorded for the most part in 1979 and 1980 (with a few tracks dating as far back as 1977), Shut Up 'n Play Yer Guitar is simply a collection of guitar solos. Even though most of the tracks were just edited out of their original song context, they fare well as stand-alone pieces, as Zappa was an ever-inventive player. Take, for example, the three versions of "Shut Up." These tracks were simply the guitar solos from "Inca Roads," but thanks to Zappa's ability for "instant composition," each version has its own complete story to tell, without ever being redundant. Other highlights are the reggae-tinged "Treacherous Cretins" and the beautiful "Pink Napkins." In addition to the electric guitar mangling contained on Shut Up 'n Play Yer Guitar, there are a couple of rare tracks that feature Zappa on acoustic guitar in a trio with Warren Cuccurullo on acoustic rhythm guitar and Vinnie Colaiuta on drums. In fact, special mention goes to Colaiuta for his polyrhythmic daring all over this album. All bandmembers play great throughout, but Colaiuta's playing is mind blowing. The album closes with another oddity: a gorgeous duet between Zappa on electric bouzouki and Jean-Luc Ponty on baritone violin. This is an album that should be heard by anyone who's into guitar playing. Highly recommended." (Sean Westergaard, AMG)
Frank Zappa, guitar, bouzouki
Denny Walley, rhythm guitar
Ray White, rhythm guitar
Ike Willis, rhythm guitar
Steve Vai, rhythm guitar
Warren Cuccurullo, rhythm guitar, electric sitar
Jean-Luc Ponty, baritone violin
Tommy Mars, keyboards
Bob Harris, keyboards
Peter Wolf, keyboards
Andre Lewis, keyboards
Eddie Jobson, keyboards
Patrick O'Hearn, bass, dialogue
Arthur Barrow, bass
Roy Estrada, bass
Vinnie Colaiuta, drums
Terry Bozzio, drums, dialogue
Ed Mann, percussion
Digitally remastered