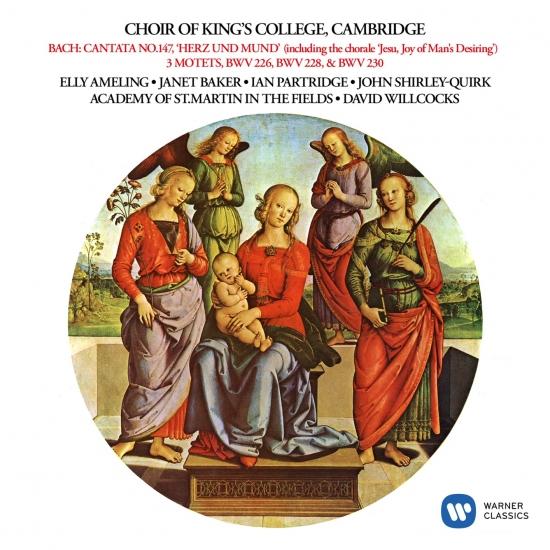 "In recent years, single-composer programs have become popular on stage and disc, but this may not always be the best way to listen to music, no matter how beautiful. This set presents a mix of Bach's vocal and instrumental works, carefully selected for contrast and variety of character, mood, and texture. It includes 12 chorales followed by their chorale preludes, offering the opportunity to hear how Bach turned the simple melodies, sung in harmony a capella or in unison with organ accompaniment, into extremely elaborate, complex contrapuntal pieces for two organs. Indeed the first one is so convoluted that it sounds like two different pieces being played simultaneously. The reverberant acoustics of King's College Chapel, where the set was recorded, may contribute to this effect. The six Motets (like the six Brandenburg Concertos), were not meant to be performed as a group, but composed for very different occasions. Written for multiple-part choruses, they vary greatly in tempo, articulation, complexity and expression, and are overwhelmingly beautiful. The Cantata features four great vocal soloists: soprano Elly Ameling soars up high with the joyful ease of a bird, mezzo-soprano Janet Baker sounds warm and caressing; tenor Ian Partridge is wonderfully mellow and lyrical, and bass John Shirley-Quirk injects a dramatic element into the music. The principal string and winds players of the orchestra are splendid; the opening trumpet fanfare sets a bright, triumphant mood. The chorus is excellent, though the echo sometimes obscures the counterpoint, and the sopranos can be a bit shrill. The Motets, on CD 2, sound best. Unfortunately, the booklet does not include the texts, and instead refers listeners to the label's website, which may not be convenient to everyone and feels like an intrusion of modern technology into a more humanistic age." (Edith Eisler)
Dame Janet Baker, mezzo-soprano
Elly Ameling, soprano
Janet Craxton, oboe de amore
Iona Brown, violin
Ian Partridge, tenor
Ian Hare, organ
John Shirley-Quirk, bass
John Wilbraham, trumpet
King’s College Choir
Sir David Willcocks, conductor
Digitally remastered 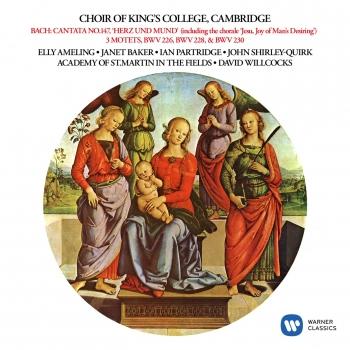 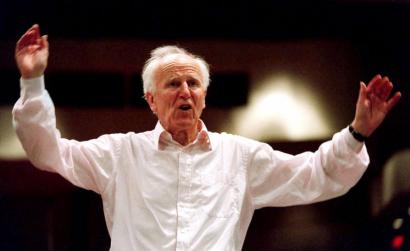 Sir David Willcocks
The English conductor, organist and music educator, Sir David Willcocks, began his musical training as a chorister at Westminster Abbey from 1929 to 1934. He was a music scholar at Clifton College, Bristol (1934-1938), and then the organ scholar at King’s College, Cambridge (1939-1940). Following a five-year period of war military service, in which he was awarded the Military Cross, he returned to King’s College for two years (1945-1947). He was elected a Fellow of King's College, Cambridge, and appointed Conductor of the Cambridge Philharmonic Society.
From 1947 to 1950 David Willcocks was the organist at Salisbury Cathedral and from 1950 to 1957 at Worcester Cathedral. During his years at Worcester he was principal conductor of the Three Choirs Festival (1951, 1954 and 1957) and conductor of the City of Birmingham Choir (1950-1957), with whom he gave his first British performance of Maurice Duruflé’s Requiem in 1952. From 1956 to 1974 he was also conductor of the Bradford Festival Choral Society. From 1957 to 1974 he was Director of Music at King’s College, Cambridge, where he maintained the glorious tradition with distinction. He made numerous recordings that gained international popularity through television and radio. With King's College Choir Cambridge he gave concerts in many European countries, Canada and Africa. At Cambridge he also served as University Organist, University Lecturer and Conductor of the Cambridge University Musical Society. From 1960 to 1998 he was Musical Director of The Bach Choir (London) which, since its foundation in 1875, has given first performances of several important works.
With The Bach Choir, Sir David Willcocks gave the first performances in Italy of Benjamin Britten’s War Requiem at Perugia, Milan, La Scala and Venice in 1963 and later introduced the work in Japan, Hong Kong, Portugal and the Netherlands. From 1974 to 1984 he was Director of the Royal College of Music in London. He appears frequently as a conductor in the USA, Canada and European countries. He has also paid many visits to New Zealand and Australia, giving concerts with the New Zealand Symphony Orchestra and Orchestras of the Australia Broadcasting Corporation; to Hong Kong for concerts with the Hong Kong Symphony Orchestra and to South Africa for concerts with the South African Broadcasting Corporation Choirs and Orchestra.
David Willcocks was made Commander of the Order of the British Empire in 1971, and was Knighted in 1977 in the Queen's Silver Jubilee Honours List. He is currently Music Director Emeritus of King's College Choir Cambridge. Sir David has received honorary degrees in England from the Universities of Bradford, Bristol, Exeter, Leicester and Sussex, and from the Royal College of Music in London; in the USA from Luther College (Iowa), St. Olaf College (Minnesota) and Westminster Choir College (New Jersey); and in Canada from the Universities of Trinity, Toronto and Victoria B.C. He is an Honorary Fellow of King’s College, Cambridge. He served as general editor of the Church Music series of the Oxford University Press.