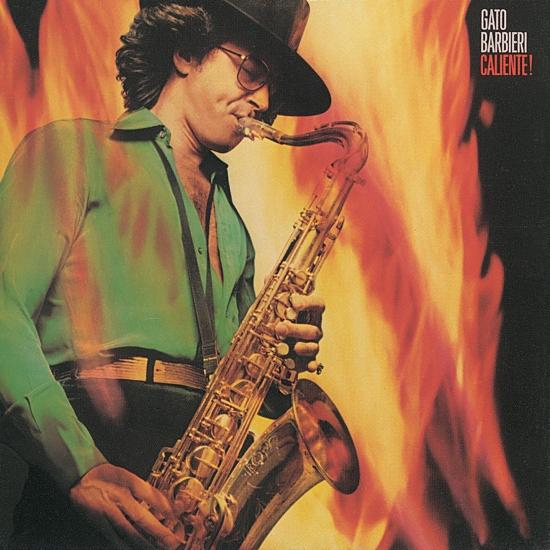 Gato Barbieri left his native Argentina for Europe in 1962. By the end of the decade he was based in America, and established as one of the world’s leading jazzfusion saxophonists and composers.
One of Gato Barbieri's later recordings – but don't hold that against it! The set's a smoother effort than most of Gato's earlier work, but it's also still pretty darn soulful – done in a way that allows plenty of space for his raspy reed work on tenor to flow over the top of larger arrangements that have a nice electric touch. Players include Eric Gale and Joe Beck on guitars, Don Grolnick on keyboards, and Mtume and Ralph MacDonald on percussion – both of whom give the tunes a nice earthy undercurrent when needed. And while we might be put off by the larger, more heavily-arranged sound – Gato himself is still in charge of the charts, and keeps things nicely focused in a soulfully expressive way!
The studio orchestra on Caliente! was as good as it gets in the 1970s: Marvin Stamm, Bernie Glow, Randy Brecker and Marky Markowitz (tp); Wayne Andre, David Taylor and Paul Faulise (tb); Gato Barbieri (ts); Eddie Martinez (keyboards); Don Grolnick (keyboards,synt); Eric Gale, David Spinozza and Joe Beck (g)l Gary King (b); Lenny White (d); Ralph MacDonald, Mtume (perc); Alfred Brown, David Nadien, Charles McCracken, Theodore Israel, Matthew Raimondi, Harry Cykman, Harry Glickman, Alan Shulman, Max Ellen, Harold Kohon, Max Pollikoff, Harry Lookofsky and Paul Gershman (strings); and Jay Chattaway (arr, cond). [Above, trumpeter Randy Brecker]
"Believe it or not, this Argentinian-born saxophonist spent his early years playing in the jazz avant-garde with the likes of Don Cherry. But for all his free-form experiments, "the Cat" hit his stride with this pristine piece of seminal pop-jazz. His emotional, warm-blooded playing, gritty-sweet tone, and Latin-laced grooves slide down smooth and easy. Covers of Santana's "Europa (Earth's Cry Heaven's Smile)" and Marvin Gaye's "I Want You" remain faithful to the originals' vibe, yet take on a seductive Spanish accent thanks to Barbieri's expressive tenor and a battery of Latin percussion. Elsewhere, hip-swiveling rhythms and tuneful arrangements of cuts like "Fiesta," "Behind the Rain," and "Los Desperados" simply simmer. Drummer Lenny White kicks down a rock-solid beat, percussionists Ralph MacDonald and Mtume add the spice that's funky and nice, and producer Herb Alpert (of Tijuana Brass, and the "A" in A&M Records) polishes the proceedings to a glossy sheen with colorful orchestrations and silky strings." (AMG)
Gato Barbieri
Digitally remastered 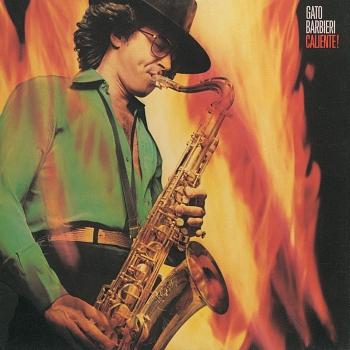 Gato Barbieri
was the second Argentine musician to make a significant impact upon modern jazz -- the first being Lalo Schifrin, in whose band Barbieri played. His story is that of an elongated zigzag odyssey between his homeland and North America. He started out playing to traditional Latin rhythms in his early years, turning his back on his heritage to explore the jazz avant-garde in the '60s, reverting to South American influences in the early '70s, playing pop and fusion in the late '70s, only to go back and forth again in the '80s. North American audiences first heard Barbieri when he was a wild bull, sporting a coarse, wailing John Coltrane/Pharoah Sanders-influenced tone. Yet by the mid-'70s, his approach and tone began to mellow somewhat in accordance with ballads like "What a Diff'rence a Day Makes" (which he always knew as the vintage bolero "Cuando Vuelva a Tu Lado") and Carlos Santana's "Europa." Still, regardless of the idiom in which he worked, the warm-blooded Barbieri was always one of the most overtly emotional tenor sax soloists on record, occasionally driving the voltage ever higher with impulsive vocal cheerleading.
Escalator Over the HillThough Barbieri's family included several musicians, he did not take up an instrument until the age of 12 when a hearing of Charlie Parker's "Now's the Time" encouraged him to study the clarinet. Upon moving to Buenos Aires in 1947, he continued private music lessons, picked up the alto sax, and by 1953 had become a prominent national musician through exposure in the Schifrin orchestra. Later in the '50s, Barbieri started leading his own groups, switching to tenor sax. After moving to Rome in 1962 with his Italian-born wife, he met Don Cherry in Paris the following year and, upon joining his group, became heavily absorbed in the jazz avant-garde. Barbieri also played with Mike Mantler's Jazz Composer's Orchestra in the late '60s; you can hear his fierce tone unleashed in the "Hotel Overture" of Carla Bley's epic work Escalator Over the Hill.
El PamperoYet after the turn of the next decade, Barbieri experienced a slow change of heart and began to reincorporate and introduce South American melodies, instruments, harmonies, textures, and rhythm patterns into his music. Albums such as the live El Pampero on Flying Dutchman and the four-part Chapter series on Impulse! -- the latter of which explored Brazilian and Afro-Cuban rhythms and textures, as well as Argentine -- brought Barbieri plenty of acclaim in the jazz world and gained him a following on American college campuses.
Last Tango in ParisHowever, it was a commercial accident, his sensuous theme and score for the controversial film Last Tango in Paris in 1972, that made Barbieri an international star and a draw at festivals in Montreux, Newport, Bologna, and other locales. A contract with A&M in the U.S. led to a series of softer pop/jazz albums in the late '70s, including the brisk-selling Caliente! He returned to a more intense, rock-influenced, South American-grounded sound in 1981 with the live Gato...Para los Amigos under the aegis of producer Teo Macero, before doubling back to pop/jazz on Apasionado. Yet his profile in the U.S. was diminished later in the decade in the wake of the buttoned-down neo-bop movement.
Que PasaBeset by triple-bypass surgery and bereavement over the death of his wife, Michelle, who was his closest musical confidant, Barbieri was inactive through much of the 1990s. But he returned to action in 1997, playing with most of his impassioned intensity, if limited in ideas, at the Playboy Jazz Festival in Los Angeles and recording a somewhat bland album, Que Pasa, for Columbia. Che Corazon followed in 1999.
The Shadow of the CatAs the 21st century opened, Barbieri saw a steady stream of collections and reissues of his work appear. A new album, Shadow of the Cat, appeared from Peak Records in 2002. He died in New York City in April 2016 at the age of 83.