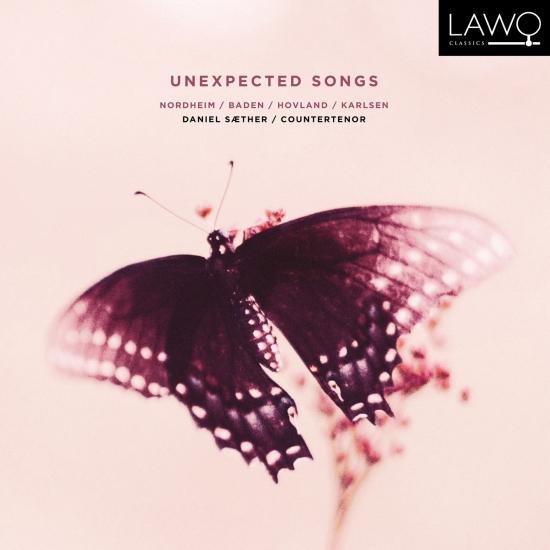 "Unexpected Songs" is the debut recording of Norwegian countertenor Daniel aether. The works on this album are juxtapositions of old (texts) and new (music). The songs are written by some of the most important Norwegian composers of contemporary music and religious music in the 20th and 21st centuries. The texts are mostly religious; hymns, bible texts and excerpts from the classical mass. ARNE NORDHEIM (19312010) had an insightful relationship with world literature. His list of works encompasses many texts set to music, ranging from the Bible to Dante to Norwegian contemporary literature. "Three Unexpected Songs" was written for singer Carl Hogset as a surprise thus the title. That he chose Henrik Wergeland is not surprising, nor that "Den forste sommerfugl" (The First Butterfly) was premiered in their mutual home Grotten on none other than the 17th of May 1982 by two of the guests, singer Guri Egge and harpist Elisabeth Sønstevold. The song is dedicated to his Rannveig, who had become his bride the previous year in a ceremony in Oslo City Hall. "Hymnus" by CONRAD BADEN (19081989) is based on "Vexilla regis", a medieval hymn by Venantius Fortunatus, a sixth-century Italian-born bishop in French Poitiers. "Magnificat" by EGIL HOVLAND (19242013) is the fruit of a commission from Ny Musikk, the Norwegian branch of the International Society for Contemporary Music. The work was premiered in 1964 in Trinity Church in Oslo during the Nordic Church Music Symposium with Vessa Hansen as soloist. The church music of KJELL MORK KARLSEN (born 1947) has been influenced by his own distinguished family tradition. His father, Rolf Karlsen, was an enterprising cathedral organist and choirmaster in Oslo from 1966 to 1981. The son has combined his performative career with creative activity and has provided Norwegian church music with an extensive repertoire for organ, choir, various instruments and for solo voice, often clearly rooted in sacred vocal tradition. His compositions for wind instruments are grounded in his own playing of several of them. The five movements of "Missa brevis" (short mass) are as found in the classical mass, and the latter is reflected in the church's Sunday worship service: "Kyrie", "Gloria", "Credo", "Sanctus" and "Agnus Dei".
Daniel Sæther, counter-tenor
Caroline Eidsten Dahl, recorder
Lynetta Taylor Hansen, flute
Marianne Svenning, oboe
Ida Bryhn, viola
Anne Stine Dahl, cello
Henrikke G. Rynning, gamba
Vegard Lund, theorbo
Birgitte Volan Håvik, harp
Lars Henrik Johansen, harpsichord
Anders Eidsten Dahl, organ