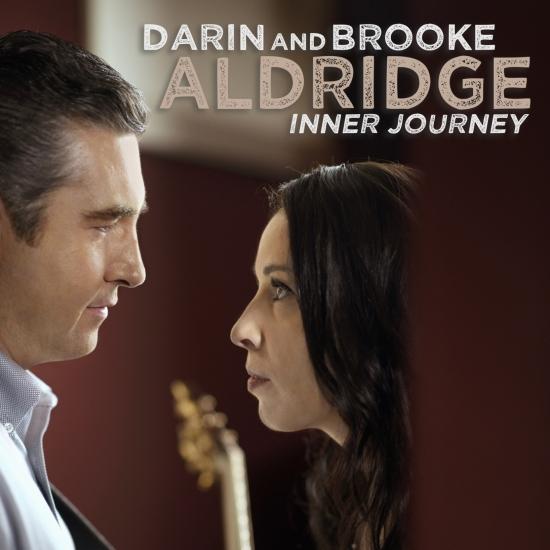 Acclaimed Americana/Bluegrass duo Darin and Brooke Aldridge will releaseInner Journey, their debut album for Rounder Records. Co-produced by Darin Aldridge and seven-time Grammy winner Mark Fain, the album features beautifully imagined interpretations of songs by a host of writers across a variety of genres including folk-rock legends Nanci Griffith (“Trouble in the Fields”), Graham Nash (“Teach Your Children”), and Richard Thompson (“Tear- Stained Letter”); country and bluegrass royalty Charlie and Ira Louvin (“Every Time You Leave”), Doc Watson (“Your Lone Journey”), and Vince Gill, Earl Scruggs, and Randy Scruggs (“I Found Love”); and Americana stalwarts Kasey Chambers (“This Flower”), Gretchen Peters (“End of a Long Hard Day”), and Swedish duo Johanna and Klara Söderberg, better known as First Aid Kit (“Emmylou”).
Their joyful rendition of “I Found Love” is available today via all digital service providers. Listen to the track HERE.
“I Found Love is a wonderful Vince Gill, Randy Scruggs, and Earl Scruggs song that we first heard on Earl Scruggs’ ‘Family and Friends’ album. Working closely with the great Earl Scruggs Center in Shelby, NC, we were excited to stumble across this upbeat tune that Earl had a co-write on,” said Brooke Aldrige. “It also takes us back to a memory of when Darin and I had the honor to open for the legendary Earl Scruggs in some of D&B’s first few years as a band. This well-written tune leads off our CD, describing perfectly what Darin and I found in each other 11 years ago…life, love and a career that’s taken us to places that we only once dreamed of.
Darin and Brooke Aldridge, vocals 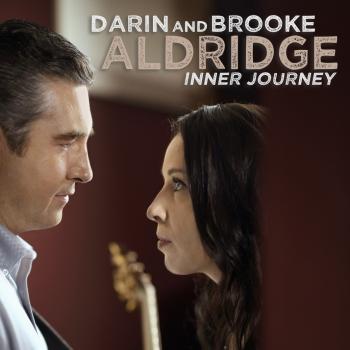 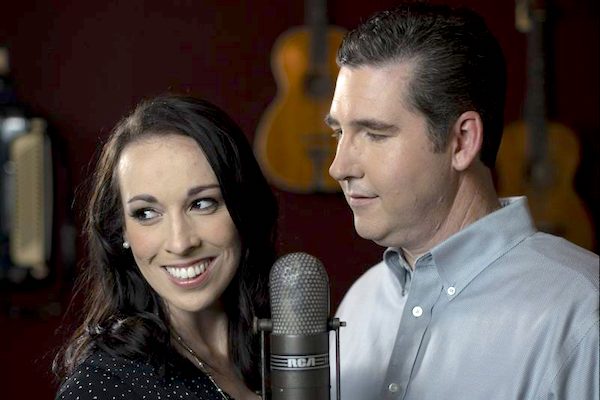 Darin and Brooke Aldridge
Husband and wife duo Darin & Brooke Aldridge draw on the traditions of their native North Carolina, the savvy of a young, gifted band and their own dedication to ingenuity to create the most adventurous album of their career with their latest critically acclaimed release, Faster & Farther.
The duo has placed several tracks at the top of the charts on Americana/Roots, SiriusXM, Bluegrass and Gospel charts. They have received multiple nominations from the International Bluegrass Music Association (IBMA) the Society for the Preservation of Bluegrass Music of America (SPGBMA) and Inspirational Country Music (ICM). Their music videos “Wildflower” and “Tennessee Flat Top Box” and most recently “Every Time You Leave” were heavily featured on outlets including CMT, CMT Edge, GAC, Bluegrass Ridge TV and The Bluegrass Situation. TV appearances include PBS, Great American Gospel, The Bluegrass Road, RFD-TV, Blue Highways TV, Songs of the Mountain, Woodsongs, Larry’s Country Diner and Music City Roots.
Both highly acclaimed vocalists in their own right (Brooke is the reigning IBMA Female Vocalist of the Year and nominated again this year), Darin and Brooke combine rich harmonies with impeccable musicianship to create the unmistakable sound that has made them one of the hottest young acts in acoustic music and they’ve surrounded themselves with a band of equally amazing pickers. Darin spent 6 years as a member of the acclaimed County Gentleman and is a highly sought-after multi-instrumentalist. Brooke has been lauded for having one of the most powerful voices in music of any genre.
There’s a lot about the new generation of bluegrass that sure is inspiring. And Darin and Brooke are two of my favorites of this great new generation. I’m flattered that they included me in their new record and even better, to find out they are equally as great as people”. ~Vince Gill
“Brooke asserts herself as one of the more powerful female vocalists on the scene…” ~Relix Magazine
“Husband and wife duo Darin & Brooke Aldridge have carved out one of the fastest rising careers on the acoustic music scene today.” ~Billboard Magazine
Snapshots, their highly acclaimed previous album, made its debut at the #8 spot on The Billboard Bluegrass Album Chart in April of 2016 and by May the first single “Tennessee Flat Top Box” had claimed the #1 position on the Bluegrass Today and Bluegrass Unlimited Charts. They ended the year by placing three songs from the album at #1 and earning critical praise in Bluegrass, Contemporary Christian and Americana.
Their latest project, Faster & Farther, their 7th album, was released on February 10, 2017 on the Mountain Home Music Company label to great fanfare. It is rooted in the stellar musicianship of Darin and Brooke’s bluegrass and gospel background. Faster and Farther showcases appearances by special guest artists like New Grass Revival/Doobie Brothers legend, close friend, mentor and 2016 touring partner John Cowan, New Grass Revival member Pat Flynn, Country Music Hall of Famer and close friend Vince Gill, Union Station bassist Barry Bales and more. It has been hailed by critics as their best yet and several songs from the album have reached the Top of the Bluegrass Today, Bluegrass Unlimited and Roots Music report charts.
Darin and Brooke enjoyed a very busy touring year in 2016 with shows pairing them with previously mentioned John Cowan for more than 30 theatre and high profile festival dates spanning the country, 16 theatre dates with Country Music Hall of Famer Jimmy Fortune, a Ryman appearance with Vince Gill and several festival/theatre stops with Pat Flynn. They also shared the stage with the likes of Nitty Gritty Dirt Band founding members John McEuen and Jimmie Fadden, Country/Bluegrass legend Marty Raybon, Platinum selling Country star John Berry and Blue Highway members Jason Burleson and Tim Stafford.
2017 saw them accelerating their schedule, appearing in places they had never been before, highlighted by a coveted main stage appearance at Merlefest as well as a repeat visit to Grass Valley Festival as well as Songs of the Mountain for a nationally syndicated PBS appearance. Brooke was named the International Bluegrass Music Association’s “Female Vocalist of the Year”, Darin was named the IBMA’s “Momentum Mentor of the Year” and fiddler Carley Arrowood was named the IBMA’s “Momentum Instrumentalist of the Year”.
In September of 2017 they were invited to join an all-star cast of noted musicians from the world of Country, Rock, Blues, Gospel and Bluegrass to take part in a benefit song and subsequent video titled “All Come Together”. The brainchild of award winning co-writers John Berry and Chuck Jones, it paired them singing with Blues legend Keb’ Mo’, Rock & Roll Hall of Famer John Oates (Hall & Oates), Doobie brother John Cowan, Country stars Bryan White, Heidi Newfield (Trick Pony), Casey James (American Idol), Collin Raye, Robin Berry, Dave Innis and Paul Gregg (Restless Heart) and Gospel great Mike Farris. It was a fundraiser for Samaritan’s Purse and the proceeds went to help victims of Hurricane’s Harvey and Irma. 2018 has them touring in high profile settings more than ever. In January they appeared in 3 sold out shows Prague, Czech Republic with John Cowan, returned to Merlefest in April, they made their debut appearance on the acclaimed PBS series Mountain Stage and a enjoyed a tour in Ireland, where they headlined a large annual music festival there. They have appeared on the legendary Grand Ole Opry 7 times and in August they appeared on RFD-TV as part of the highest rated show on the network, Larry’s Country Diner as well as Country’s Unbroken Circle television series.
Brooke is nominated for Female Vocalist of the Year and they have their new single, “I’m Going Under” nominated for the “Gospel Recorded Performance of the Year” by the IBMA. They will release their new album late in 2018.