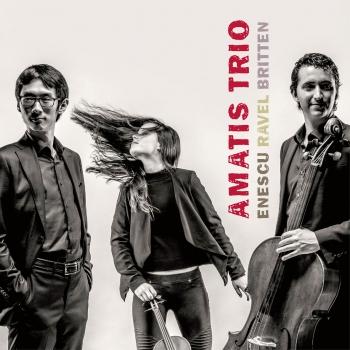 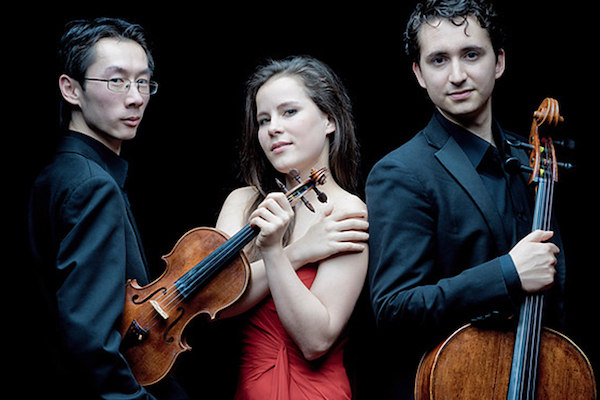 The Amatis Trio
was founded in Amsterdam in 2014 by German violinist Lea Hausmann, British cellist Samuel Shepherd and Dutch/Chinese pianist Mengjie Han.
Only weeks after forming, the trio won the audience prize in Amsterdam’s Grachtenfestival-Concours at the Royal Concertgebouw and the 1st prize at at the “Parkhouse Award” in London’s Wigmore hall- both venues that now invite them as regular performers and to which they returned in the 2018/19 season as ECHO (European Concert Hall Organization) Rising Stars.
Between 2016 - 2018 the Amatis Trio were selected by BBC Radio 3 for the BBC New Generation Artists scheme and in 2018 they were part of the Verbier Festival Academy in Switzerland.
The Amatis Trio today emerges as one of the leading piano trios among the new generation. Their commitment to new music, to education projects and bringing Western music to audiences less exposed has most recently led the Trio to undertaking tours in Indonesia and India; performing in Mumbai’s National Centre for the Performing Arts and teaching masterclasses.
Summer 2019 saw the Amatis Trio make their BBC Proms debut and with the Royal Philharmonic Orchestra under the baton of Jamie Phillips at the 2019 Kings Lynn Festival. In an “Amatis Trio and Friends” programme they made their 2019 Edinburgh International Festival debut.
The 2019/20 season sees the Trio perform in Europe’s major concert halls including Elbphilharmonie Hamburg, Wigmore Hall, Konzerthaus Dortmund, Philharmonie Cologne, Vienna’s Konzerthaus, Berlin Philharmonie and Philharmonie Paris amongst others. In addition to performances in many major concert halls in Europe the Trio makes a debut tour of Sweden and Turkey and is artist in residence at the University of Toronto, Canada in 2020. The trio was also appointed a faculty residency of Cambridge University for the 2019/20 season.
The Amatis Trio’s commitment to contemporary music led to the foundation in 2015 of the ‘Dutch Piano Trio Composition Prize’, encouraging young composers to expand the piano trio repertoire. The trio has commissioned and premiered 15 contemporary pieces since- most recently the piano trio “Moorlands”, by Swedish composer Andrea Tarrodi.
Since 2015 the trio has worked intensively with Wolfgang Redik (Vienna Piano Trio) and Rainer Schmidt (Hagen Quartet) and is currently enrolled in the Chamber Music Master Studies at the Hanns Eisler University in Berlin. The Trio is part of the European Chamber Music Academy. Other important musical influences include Hatto Beyerle, the Trio Jean Paul, Lukas Hagen, Fabio Bidini, Ilya Grubert, Anner Bylsma, Christian Schuster, Ib Hausmann, Imre Rohmann, Menahem Pressler and Sir András Schiff.
Other prize-winning accolades include the biggest chamber music prize of the Netherlands; the Kersjesprijs, the 2018 Melbourne International Chamber Music Competition, the 2015 International Parkhouse Competition at the Wigmore Hall, winners of the International Joseph Joachim Competition in Weimar, Germany as well as their nomination for the Dutch Classical Talent Award in 2015/2016.