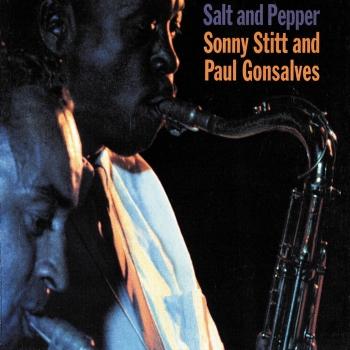 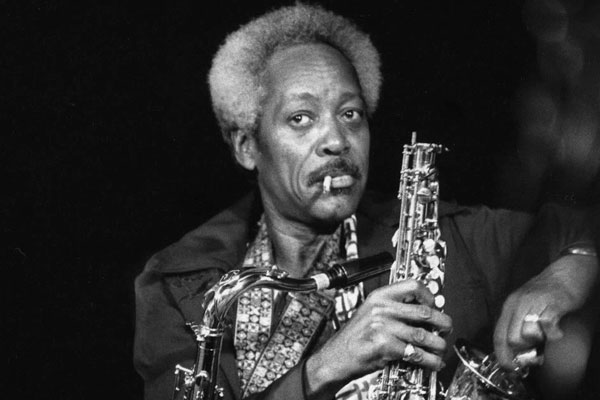 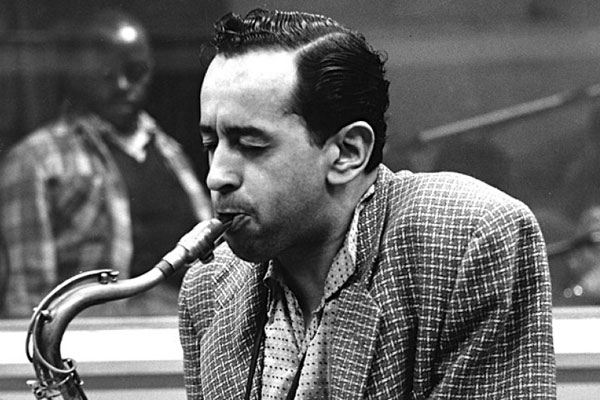 Sonny Stitt
was born in Boston but grew up in Saginaw, Michigan. He came from an extremely musical family — his father taught music at the college level, his brother was a concert pianist, and his sister was a singer — and his own training began on piano at age seven. Shortly thereafter he switched to clarinet. He left home for life on the road early, touring with Tiny Bradshaw before joining the legendary Billy Eckstine orchestra in 1945. A year later he was participating in some of the early, classic bebop recording sessions with Kenny Clarke, Dizzy Gillespie, Bud Powell, Fats Navarro, and other giants.
Stitt worked exclusively on the alto saxophone on these early recordings; yet there was more to Stitt than his command of one horn. He began performing on the tenor in 1949 (in an effort, according to some, to distance himself musically from Charlie Parker), and he immediately became a leading influence on the larger saxophone. Stitt brought the same effortless facility to bear on the tenor plus a more relaxed attack that suggested his affinity with Lester Young. Stitt was a complete saxophone virtuoso, who recorded several impressive solos on baritone in the Fifties. Stitt often worked with pickup bands as he toured, continuing his odyssey until his death. In his final decades he introduced the electric Varitone saxophone, worked extensively in the funky organ-group setting, and participated in such further all-star gatherings as the Giants of Jazz, which included Art Blakey, Dizzy Gillespie, and Thelonious Monk. He was a true road warrior and blowing demon to the end, never failing to provide a lesson to any younger player who dared to test him on the bandstand. (Bob Blumenthal)
Paul Gonsalves
Gonsalves first professional engagement was with the Sabby Lewis band in Boston. On leaving Lewis he played with Count Basie from 1946-49, was briefly with Dizzy Gillespie, and then joined Duke Ellington in 1950. Gonsalves remained with Ellington for the rest of his life, his occasional absences from the band resulting from his addiction to alcohol and narcotics. Like many other would-be Ellingtonian tenor players, Gonsalves began by learning Ben Webster's "Cottontail" solo note for note, but quickly established his own distinctive style. The circumstance which made Gonsalves' reputation was his appearance with Ellington at the 1956 Newport Jazz Festival, when his storming, 27-chorus bridge between the opening and closing sections of "Diminuendo And Crescendo In Blue" helped to focus media attention on the band and provided the basis of Ellington's "comeback".
Thereafter, Gonsalves was obliged to play extended gallery-pleasing, up-tempo solos every night, a fact which overshadowed his enormous affinity with ballads. Gonsalves' relaxed and thoughtful approach to tunes displayed a love for melody and an ability to develop long, clean and logical solo lines. His rhapsodic playing on Ellington performances such as "Happy Reunion", "Chelsea Bridge", "Solitude" and "Mount Harissa" from the Far East Suite all testify to his vulnerable, often tender sound. His playing on records made outside the Ellington aegis is usually of a similarly reflective nature. A 1970 album with Ray Nance, "Just A-Sittin' And A-Rockin", is a good example, including a marvellous performance of "Don't Blame Me". Gonsalves surpassed even this on Love Calls, his 1967 album of duets with Eddie "Lockjaw" Davis, where he delivers what might well be the definitive version of this song. In such performances, the quality of the playing perhaps reflect the man himself: Gonsalves was a sensitive yet fragile human being. He succumbed to drug addiction and alcohol dependence early in life and his career was afterwards dogged by these twin perils. When he died in London, in May 1974, his employer for close on a quarter of a century was himself too ill to be told. Ellington died a few days later and the bodies of both men, and that of Tyree Glenn, lay together in the same New York funeral home. (Source: http://paulgonsalves.org)