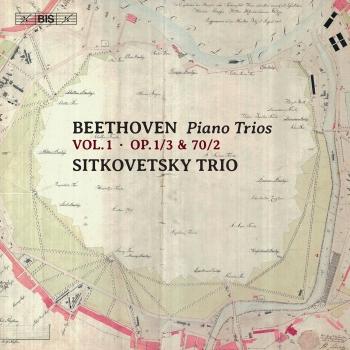 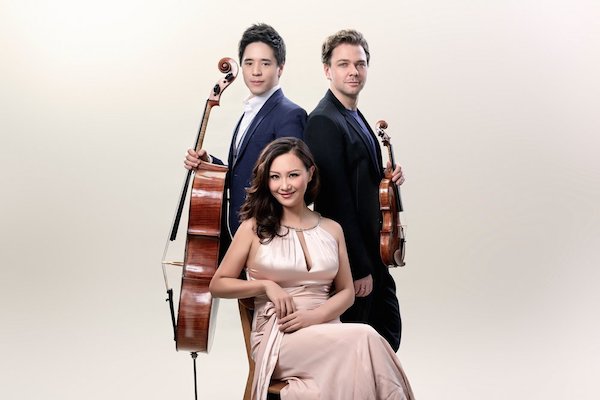 Sitkovetsky Trio
The Sitkovetsky Trio has established itself as an exceptional piano trio of today, with sensational performances in the foremost concert halls around the world. Alexander Sitkovetsky (violin) and Wu Qian (piano) were joined last season by German-Korean cellist Isang Enders to continue their journey of successful appearances. Their thoughtful and committed approach have brought the ensemble critical acclaim and invitations to renowned concert halls around the world, such as the Amsterdam Concertgebouw, Frankfurt Alte Oper, Palais des Beaux Arts, Musée du Louvre, l’Auditori Barcelona, Wigmore Hall and Lincoln Center New York to name but a few.
In the 2019/20 season the trio will return to America, with concerts in upstate New York, Bogota and Santiago de Chile. Further highlights will be performances of Beethoven’s triple concerto with the Hong Kong Sinfonietta, with Prague Philharmonia in Reggio Emilia as well as recitals at de Singel Antwerp and at Gower Festival.
The past season saw the trio tour Asia performing six concerts throughout South Korea, Singapore and Japan. Another highlight was the world premiere of a new triple concerto by Charlotte Bray with the Philharmonia Orchestra in May 2019, with further performances planned. Other appearances included the Bath Mozartfestival, St. George’s Bristol, Beethovenhaus Bonn, Frederiksvaerk and Hindsgavl Festival in Denmark as well as re-invitations to the Concertgebouw Amsterdam, Rheingau Musik Festival and the Chamber Music Society of Lincoln Center.
The trio have performed the Beethoven Triple Concerto with the Konzerthausorchester Berlin, the Netherlands Philharmonic, the Munich Symphony and the Anhaltische Philharmonie Dessau. Highlights also include performances at the Festivals of Music@Menlo in California, Chamber Music Society of Lincoln Center, Hong Kong International Chamber Music Festival, and the Menuhin Festival in Gstaad, as well as at the Bergen, Rheingau and Cheltenham Music Festivals. In addition, they have embarked on numerous tours, including a tour of the USA with concerts in San Francisco and Washington DC, a China tour with performances in Beijing, Shanghai and Guangzhou and a second successful tour of Australia with Musica Viva, receiving numerous glowing reviews.
First prize-winners of the International Commerzbank Chamber Music Award, the trio is also a recipient of the NORDMETALL Chamber Music Award at the Mecklenburg-Vorpommern Festival and the Philharmonia-Martin Chamber Music Award. They have been supported by the Hattori Foundation, the Musicians Benevolent Fund, the Fidelio Trust and the Swiss Global Artistic Foundation. Moreover, they are recipients of the Golubovich Fellowship, the Richard Cairnes Junior Fellowship for Chamber Music at Trinity Laban College of Music, a Royal Northern College of Music Fellowship and held a Junior Fellowship at the Royal Academy of Music from 2008 to 2010. They released their first recording for BIS Records in 2014 including works by Smetana, Suk and Dvořák to much critical acclaim. This led to further releases of works by Brahms and Schubert on the Wigmore Live Label and another recording for BIS of Mendelssohn Trios in 2015. Recently, they have recorded their third disc for BIS; Beethoven’s Trios Op.1 and Op.70, and Allegretto in B-flat major for Piano Trio WoO 39 as part of their complete Beethoven cycle, to be released in time for the composer’s birthday celebrations in 2020.