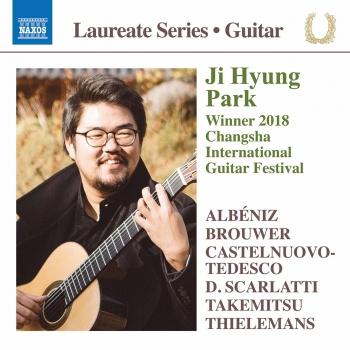 Ji Hyung Park
Born in 1993, Ji Hyung Park began learning the classical guitar at the age of nine under the tutelage of Do-Hyung Kim. From 2009 to 2013 he studied at the Korea National University of Arts, and after obtaining his Bachelor’s degree decided to continue his studies in Paris. In 2014, he was the first Korean to enter the Conservatoire National Supérieur de Musique et de Danse de Paris, where he obtained his Master’s degree as a student of Roland Dyens and his assistant Jean-Marc Zvellenreuther. He also received regular guidance from his mentor Judicaël Perroy, with whom he is currently studying at the San Francisco Conservatory of Music.
Ji Hyung Park has won numerous prizes in international competitions including First Prize at the 7th Changsha International Guitar Competition (one of the biggest guitar competitions in Asia), the 8th Terra Siculorum in Odorheiu Secuiesc, Romania, the 6th Stefano Strata-Città di Pisa, and the Korean Guitar Association competition. He was also awarded Second Prize at the 14th José Tomás Villa de Petrer, Spain, and the youngest finalist prize of the year (Premio Aurora Blardone) at the 50th Michele Pittaluga – Concorso Internazionale di Chitarra Classica in Alessandria.