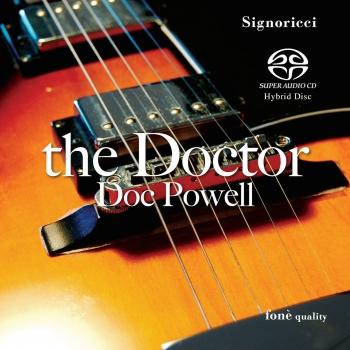 Doc Powell
Legendary Grammy-nominated guitarist Doc Powell has built a legacy as a musical chameleon. Besides having a successful solo career, Doc has contributed to over 130 recordings of some of the premier recording stars in R&B/pop/jazz and gospel. Beginning with a 13-year stint recording and performing with the late Luther Vandross and continuing with the likes of Stevie Wonder, Aretha Franklin, Prince, Ciara, Wycliff Jean, Vanessa Williams, Chaka Khan, Patti LaBelle, and John Legend, he’s also played with jazz greats George Duke, Bob James, the late Grover Washington Jr., and Stanley Clark, as well as gospel superstars such as Shirley Caesar, The Mighty Clouds of Joy, CeCe Winans, Marvin Sapp, BeBe Winans, J Moss, Yolanda Adams, Israel, Dr. Bobby Jones, Fred Hammond, Donnie McClurkin, and record-breaking, chart-topping Kirk Franklin.
Powell has now added to his already extensive resume — music scoring and television. In 2006, he was hand-picked to score the music for an independent film, written and directed by Image Award-winner actor Brandon Hammond. Summer Blame received critical reviews from independent film festivals throughout the country. A few months later, he was selected to score the music for an up-and-coming playwright’s Los Angeles debut production of Façade. Last year, Doc carved out a permanent spot as lead guitarist on the hit NBC reality competition series called The Singing Bee. It debuted in the summer of 2007 and was quickly picked up for the fall season. Shortly thereafter, Doc’s trademark sound added to the all-star band of BET’s No. 1 new fall show called Sunday Best, where the best-of-the-best voices compete for a gospel recording contract.
You would think that these projects alone would be enough to keep Powell’s schedule filled up for the rest of the year…not so. In addition to these projects, Powell is featured on Kirk Franklin’s latest project “The Fight of My Life” and is touring the country with Franklin. He is also featured on saxophonist Kirk Whalum’s “Gospel According to Jazz III” new live recording… and working on two new solo projects due out later this year.
Doc Powell’s musical journey began in Spring Valley, NY, where he started playing guitar at age six. He later studied at the University of Charleston, West Virginia. After college, Powell landed session work in NY, honing his skills on live recording sessions, cutting commercials, and movie soundtracks such as Down and Out In Beverly Hills, Turner & Hooch, The Goonies, Hero, and The Five Heart Beats. His big solo break began when he scored a gig at Mikell’s, one of Manhattan’s hot jazz clubs. It didn’t take long for Powell to build a loyal fan base that quickly grew into a huge following, long before he became a recording artist.
In 1987, he released his first solo record, Love Is Where It’s At, and earned a Grammy nomination (Best R&B Instrumental) for his cover of Marvin Gaye’s signature hit, “What’s Going On.” A string of well-received releases followed, most notably Inner City Blues, which was funded and released on his own imprint, West Coast Records. Recalls Powell, “I took all the money I had earned touring with Luther and was ready to sell it door to door.” In fact, the keyboard Powell used to lay the tracks was a birthday present from Vandross.
Powell’s 13 years performing with Vandross catapulted him to another level as a musician, and was highlighted by his legendary rock guitar solo on one of Vandross’ biggest hits, “Stop to Love,” which is still imitated by rockers today.
In 1996, Powell enjoyed his biggest solo commercial success with his CD Laid Back. The record yielded two Top-10 hits, including “Sunday Morning,” which made history in smooth jazz radio by achieving the most spins (over 1000) in its first week of release. By year-end, Laid Back was rated the No. 2 jazz record of the year.
Don’t Let the Smooth Jazz Fool Ya, released in 1997, featured guest performances by Grammy-winner Roy Hargrove and smooth-jazz star Dave Koz. In 1999, Powell released his first gospel effort, I Claim the Victory, which helped raise funds for his church, West Angeles Church of God in Christ in Los Angeles. The title track featured stirring vocals by former Temptations lead vocalist, Ollie Woodson. By 2000, Powell opted to birth a new entity, DPR Music Group, and his first release, Life Changes (distributed by Samson Records, 2001), featured special guests Bob James and Patrice Rushen.
Prior to his debut on Heads Up International, 97th & Columbus (2003), Powell served as bandleader on Grammy-winner Kirk Franklin’s top-grossing Hopeville Tour, which also headlined gospel superstars Yolanda Adams and Donnie McClurkin. He also recorded another solo project – Cool Like That (2004).
“Even after 20 years and ten albums, I’m still excited by the creative process, and the evolution of taking something very rough and turning into a great song,” says Powell. “There’s a special joy in making your own record. I do the best that I can, and when I hear someone tell me that he or she felt something or connected to what I was feeling at a specific moment, it’s a very exciting sensation, and that’s when I know that I’ve been successful.”