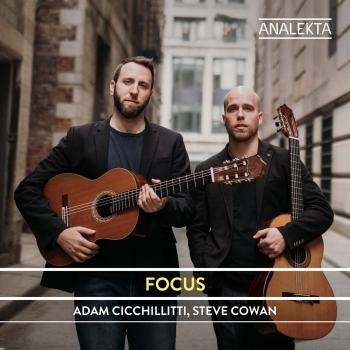 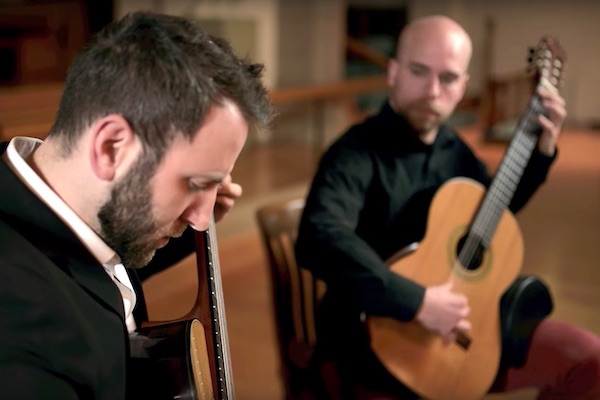 Adam Cicchillitti
is a “superb Canadian guitarist” (Classical Guitar Magazine, 2017), currently based in Ottawa. Originally from Montréal, Adam’s competition successes have placed him on concert stages across Canada and the United States. Adam is an active performer, teacher, arranger, and composer. His arrangements and compositions for guitar are published by editor and publishing house Les Productions d’Oz.
In 2016, he toured Eastern Canada with Jeunesses Musicales and baritone Philippe Courchesne-Leboeuf, showcasing his arrangements of German and Spanish song cycles for the intimate duo of voice and guitar. The ensemble, entitled Lieder & canciones, performed in over 20 Canadian cities and was featured regularly on Radio-Canada and CBC, and at Angèle Dubeau’s Fête de la musique, Place des Arts (Montréal), and Salle J.-Antonio-Thompson (Trois-Rivières). At the request of Radio-Canada, Adam also arranged 20 Schubert lieder to accompany Philippe Sly in their program Révélations 2013. The video recordings have reached hundreds of thousands of people internationally through social media.
Adam is currently completing a doctorate in music performance at McGill University, studying with renowned guitarist Jérôme Ducharme. He appeared on the CBC’s Top 30 under 30 list in 2017, representing the most promising classical musicians in Canada under 30 years old. The CBC described Adam as an “ardent ambassador of the classical guitar in Canada”. Finalist, semifinalist and multiple prize-winner in several national and international competitions, Adam will tour with acclaimed guitarist Steve Cowan and Debut Atlantic in 2018. Adam is the founder of the guitar program at Ottawa Suzuki Strings and is a specialist in child pedagogy.
Steve Cowan
Canadian guitarist Steve Cowan has performed and taught extensively throughout Canada, the United States, and Europe. His critically-acclaimed debut album, Pour guitare, features exclusively Canadian music and has helped to establish him as “one of Canada’s top contemporary classical guitarists” (Classical Guitar Magazine). He has commissioned several new works for guitar and given world premieres in major cities such as Paris, Toronto, and New York.
The 2018-2019 season will include Steve’s orchestral debut as a soloist with Ensemble del Arte in Germany, a duo tour of the Atlantic provinces with guitarist Adam Cicchillitti, and the release of a new album with the EMEC discos label in Madrid. The album will feature lesser-known 20th century repertoire as well as the premiere recording of Arctic Sonata by Gulli Björnsson, which was premiered by Steve at the Toronto Guitar Weekend in 2016.
Steve has won awards at 9 major national and international performance competitions, 7 of which are first prizes. A distinguished teacher, he has given public masterclasses at the University of Victoria, McMaster University, Conservatorium van Amsterdam, the Royal Danish Academy of Music, and more. Steve is originally from St. John’s, Newfoundland, and holds degrees from Memorial University, the Manhattan School of Music, and is currently pursuing Doctoral studies at McGill University in Montréal. His former teachers include Sylvie Proulx, David Leisner, and Jérôme Ducharme.