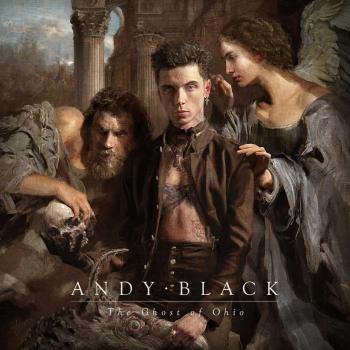 The Ghost of Ohio 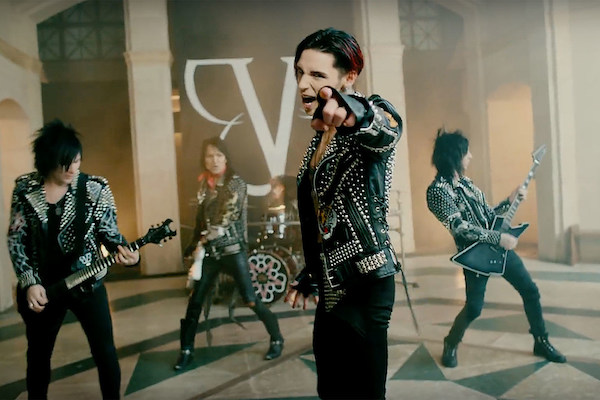 Andy Black
The kid who grew up to fashion the swaggering superhero, pop-iconoclast, underdog-champion alter ego “Andy Black,” in the tradition of David Bowie or the Sex Pistols, began with a reverence for the magical convergence of sight and sound. Attitude, language, music, and fashion coalesced into a daily challenge to convention.
The Ghost of Ohio, the second album released under the Andy Black moniker, is both a soundtrack to its comic book graphic novel counterpart and a thrilling standalone record of diverse anthems and ballads, in pursuit of a muse that transcends genre.
As a child, Andy Biersack built miniature KISS stages in his bedroom, tore through Spawn and Lobo comics, devoured reruns of the ‘60s Batman TV series, blasted the devilishly hooky horror punk of the Misfits, and dressed as the Phantom of the Opera. The appeal of sports like hockey and football were as much about the aesthetic iconography as the athleticism. Biersack’s fascination with the supernatural, wrestling with doubt, was consistently intertwined with symbolism.
The new Andy Black record marries melancholy themes with upbeat rock and pop, mining the underreported haunted history of his hometown to tell a story in allegory and grandeur that explores his childhood anxieties and obsessions. “I’ve always liked the idea of building worlds, making a character for myself, in very heightened and stylized dimensions I could live in,” Biersack explains. “It’s about expressing myself creatively, while making something that didn’t exist before.”
The unabashed anthem making of Bruce Springsteen, The Killers, and U2 collide with darker undertones alongside an all-new haunted folklore, mixing boyhood dreams with otherworldly wonder. Quite literally, The Ghost of Ohio is the tale of someone who died young, whose spirit inhabits an area for a hundred years, looking for ways to connect, feeling forgotten, fighting an overwhelming disassociation. But it’s also less straightforward story and more “songs inspired by” the specifics.
It’s all a combination of musical odyssey, bombastic theatricality, and emotional honesty. It’s the same vibrant mixture that’s endeared the charismatic singer to 3 million followers across Instagram and Twitter. His sharp style and sharper sense of humor helped position him squarely in the sights of tastemaker fashion publications like Italian Vogue and brick and mortar retailers like Journeys and Hot Topic alike.
“Westwood Road” recaptures a spirit of childhood wonder and exhilaration, reflecting on the victory of dreams realized without the prism of a jaded adulthood. It’s a rollercoaster of emotions and experience, a musical exorcism of an anxious mind. Other songs evoke driving near the Ohio River, feeling the pull of a destiny beyond the hills of the Midwest against the steady anchor of family ties; the all-or-nothing drive required to realize a life fully lived; shedding skin to return to a true core; and combinations of folklore and larger than life comic book myth.
The Ghost of Ohio builds on the foundation of The Shadow Side. Andy Black’s well-received debut produced the single “We Don’t Have to Dance,” which is closing in on 45 million views on YouTube. That’s double the already impressive total of his first-ever solo single, “They Don’t Need to Understand,” which premiered back in 2015.
Armed with little more than his will and his wit, Andy left Cincinnati for Hollywood at age 18. He lived out of his car, all while grinding away to make the hard rock band he dreamt up as a kid into a reality. By his early 20s, he led Black Veil Brides on extensive world tours; released a string of Billboard Top 10 and 20 albums; and was splashed across the covers and pages of nearly every international rock magazine.
On the first Andy Black album, Biersack stretched his creative wings beyond the blueprint of the vintage-Sunset-Strip-meets-modern-hard-rock attack of BVB. He collaborated with guests and cowriters like Patrick Stump (Fall Out Boy) and Gerard Way (My Chemical Romance). The subsequent touring behind the album, including a main stage-headlining slot on the Vans Warped Tour, further broadened the public’s understanding of Biersack’s unique blend of humor and earnest passion. It even earned him an invitation to host and co-write the Alternative Press Music Awards.
The Shadow Side was followed by Andy’s starring role in the cult supernatural thriller American Satan, in which he played a tragic rock figure ensnared by a deal with the devil. His costars included John Bradley (Game of Thrones), Mark Boone Junior (Sons of Anarchy), Denise Richards, and screen legend Malcolm McDowell.
The Ghost of Ohio saw Andy return to longtime collaborator John Feldmann, the producer and songwriter whose discography includes multiple Number One rock albums and gold/platinum certifications, including releases from Blink-182, 5 Seconds Of Summer, Good Charlotte, Papa Roach, The Used, and All Time Low.
“The Shadow Side was the beginning of my return to who I’ve always wanted to be, who I was as a child, and the rediscovering of my deepest roots,” Andy observes.
“The Ghost of Ohio is the next step. It’s a full embrace of my long held passion for imagination, stretching back to when I discovered my dad’s KISS trading cards in the basement as a kid and walked my neighborhood streets dressed up like Batman.”