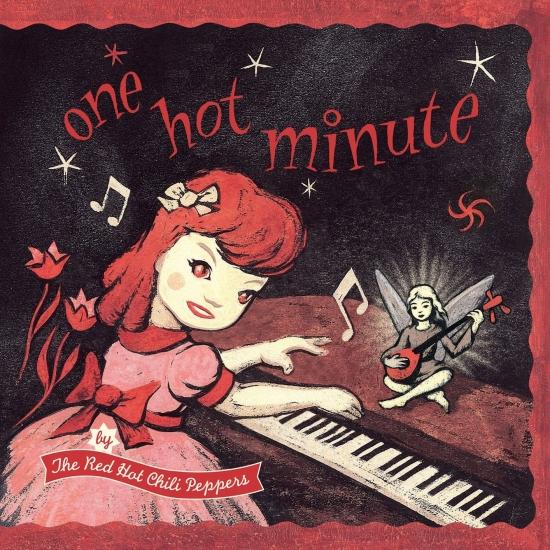 Info for One Hot Minute

Like the legendary Spinal Tap's inability to hold onto a drummer, the Red Hot Chili Peppers have grappled with a revolving guitarist problem since the 1988 death of Hillel Slovak. Former Jane's Addiction axe-man Dave Navarro climbs aboard the Chili Pepper Express for „One Hot Minute“, which also marks the return of Rick Rubin to the production helm.
Navarro's arrival coincides with a more experimental approach by the group. The transformations don't so much alter the funk-based sound of the band as they strain it through an ethereal colander of radical time changes. 'Warped,' the first single and leadoff cut, demonstrates this with a balls-to-the-wall adrenaline rush that abruptly concludes with a gentle outro. Other variations on the trademark punk-funk sound include a children's chorus on 'Aeroplane,' a talk box coupled with some mantra-like chanting on 'Falling Into Grace,' and the Beatlesque marriage of sitar and other strings on 'Tearjerker.' History gets revisited on 'Deep Kick,' a hyper-kinetic rap by Anthony Kiedis about the band's origins that gives way to Flea's ruminations on kicking around with the Butthole Surfers.
While the house-party chants of 'One Big Mob' and the Eddie Hazel-inspired sass of 'Walkabout' lean towards the Chili Peppers' penchant for not faking the funk, 'Transcending' truly gauges the band's musical maturation. Inspired by Flea's friendship with the late River Phoenix, the song starts as a reminiscence about Phoenix's intellect and gentleness over a bed of clean, up-tempo guitar, before dropping into a maelstrom of raging feedback fueled by anguish.
Flea, bass, backing vocals, lead vocals
Anthony Kiedis, lead vocals
Dave Navarro, guitars, backing vocals
Chad Smith, drums
Additional musicians:
Keith 'Tree' Barry, violin on 'Tearjerker'
Jimmy Boyle, backing vocals
Kristen Vigard, backing vocals on 'Falling into Grace'
Aimee Echo, backing vocals on 'One Hot Minute', 'One Big Mob'
Gurmukh Kaur Khalsa, chants on 'Falling into Grace'
John Lurie, harmonica on 'One Hot Minute'
Lenny Castro, percussion
Stephen Perkins, percussion
Recorded from June 1994 – February 1995 at The Sound Factory in Hollywood, California
Engineered and recorded by Dave Schiffman, Dave Sardy
Produced by Rick Rubin
Digitally remastered