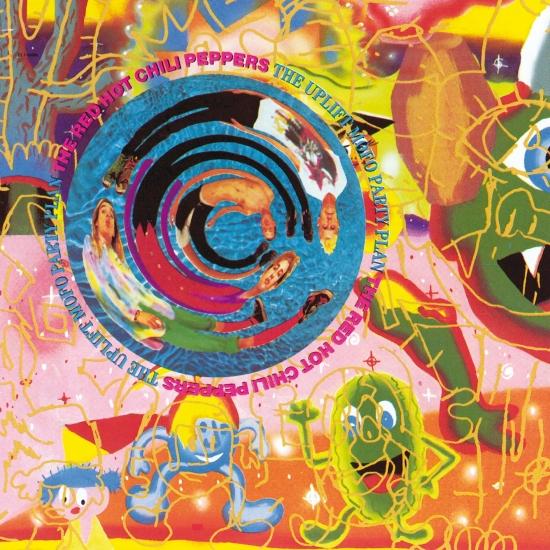 The Uplift Mofo Party Plan is the only record released by the Red Hot Chili Peppers that features all original members of the band, Anthony Kiedis, Flea, Hillel Slovak and Jack Irons, since the group’s inception in 1983.
This record shows the full potential of the original group of the original four guys who had trouble keeping the group together, but due to the determination of Flea and Anthony to keep the band together, the originals were able to put together a great record. This album was the most successful commercially and critically for the band to that point, and a huge promotional tour followed. To the dismay of the entire band, Hillel Slovak died of a heroin overdose after the tour on June 27, 1988. He had struggled with his addiction during the tour, but failed to admit a problem. The shocking death prompted Jack Irons to quit the band saying he was unable to deal with the death. Anthony Kiedis and Flea however knew that more music was bound to be played and decided to keep the train moving.
Anthony Kiedis, vocals
Hillel Slovak, guitar, sitar, background vocals
Flea, bass, background vocals
Jack Irons, drums, background vocals
Additional Musicians:
Norwood Fisher, Angelo Moore, David Kenoly, Michael Beinhorn, Annie Newman, background vocals
Recorded at Capitol Studios, Hollywood, CA.
Additional overdubs: El Dorado Recording Studio, Hollywood, CA.
Mixed at Can-Am Recorders, Tarzana, CA, and Master Control, Los Angeles, CA.
Mixed by John Potoker
Recorded by Judie Clapp
Mastered by Howie Weinberg at Masterdisk, New York City
Produced by Michael Beinhorn
Digitally remastered