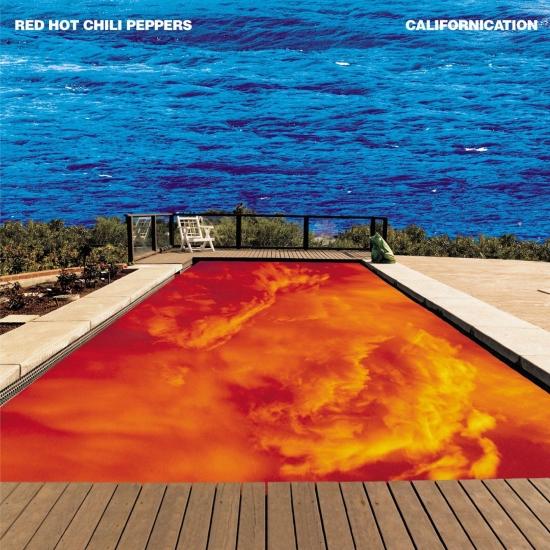 „Californication“ finds The Red Hot Chili Peppers once again in the more straightforward punk-funk mode of „Blood Sugar Sex Magik“. This return to their original sound also marks the return of prodigal son John Frusciante, who takes over for his replacement, Dave Navarro. The Chili Peppers fill „Californication“ with material shaped by personal and professional turmoil, resulting in a somewhat more sensitive approach than one might expected from a band whose hard-core following are skate-punks and drunken frat-boys. Songs such as 'Otherside,' 'Scar Tissue' and 'This Velvet Glove' overflow with background harmonies, while Frusciante's unadorned guitar provides support for Anthony Kiedis' emotive singing and broken-hearted lyrics.
The title track is one of the most impressive songs this quartet has written--It tells a tale of wandering souls who've lost their way searching for the American Dream in California. This sensitive showing does nothing to undermine the Chili Pepper's trademark aggressive musical style. If anything, their playing has gotten tighter--as evidenced by the chicken-scratch funk of 'Get On Top' and the scat-sung approach of 'I Like Dirt.' The most impressive anomaly on „Californication“ is 'Savior,' an ethereal track that finds Frusciante playing with a tone reminiscent of early Peter Green.
'...tunes that tickle the ear, romance the booty, swell the heart, moisten the tear ducts and dilate the third eye. All this inside of song forms and production that reveal sublime new facets upon each hearing....Not exactly your average white band.' (Rolling Stone)
Anthony Kiedis, vocals
Flea, bass, backing vocals
John Frusciante, guitar, backing vocals, keyboards
Chad Smith, drums
Additional musicians:
Greg Kurstin, keyboards
Patrick Warren, Chamberlin organ on 'Road Trippin''
Recorded in December 1998 – March 1999 at Cello Studios and Ocean Way Recording in Los Angeles, California
Engineered and mixed by Jim Scott, Chris Holmes
Produced by Rick Rubin
Digitally remastered
Please Note: We offer this album in its native sampling rate of 44.1 kHz, 24-bit. The provided 96 kHz version was up-sampled and offers no audible value!