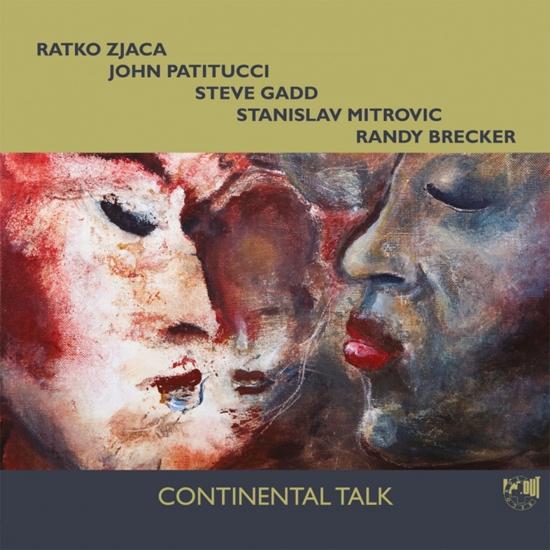 Croatian guitarist Ratko Zjaca has already put together an impressive CV having performed with such great artists as Al Foster, Miroslav Vitous, Ron Carter, Jimmy Cobb and others. It's no surprise, therefore, that his first recording for In & Out sees this tasteful guitarist in the company of jazz luminaries Randy Brecker (trumpet), John Patitucci (bass) and Steve Gadd (drums) - plus saxophonist Stanislav Mitrovic.
Surpassing boundaries, building bridges, bringing people together. It is clear from the biography and discography of the brilliant Croatian guitarist, Ratko Zjaca, that he is very much driven by these concepts. Earlier CDs are called Crossing The Border and The Bag Is Packed and, meanwhile, flights between Zagreb and New York have become a comfortable routine and English the predominant language. Ratko Zjaca stands as a symbol of the ongoing evolution of American classic jazz as it increasingly becomes a country-uniting form of communication.
No wonder, then, that Ratko has named his d?but album for In+Out Records Continental Talk. The dialogue between the new and old world is functioning much better. With him as moderator, far fewer conflicts arise than is the case on political platforms. A bilateral exchange without pre-conditions and prejudices, in which the string sorcerer is on the same level as accomplished artists such as trumpet player, Randy Brecker, bassist John Patitucci and drummer Steve Gadd creates a new ?sthetic of improvisation. "Two years ago, when I recorded Crossing The Border with John, and shortly afterwards started to play live with Randy and Steve, I knew instantly that I wanted to do my next recording with them," said Ratko. The decision to realise this project came about when he was on a plane with his friend and saxophone player, Stanislav Mitrovic. ?It was a case of small talk above the clouds, between America and Europe. Which is the reason the CD is called Continental Talk.?
Quite early in Ratko Zjaca's career, there were vivid indications of his extreme global yearning. After completing his classic studies at the University of Zagreb, the highly talented guitarist attended the conservatory of Rotterdam, where he plunged himself head on into the world of modern music. He attended master classes as well as individual lessons given by Joe Pass, Jim Hall, Pat Metheny, Mick Goodrick, Mike Stern, Bob Brookmeyer and John Abercrombie, at the same time dedicating himself to the study of composition. After Rotterdam he attended the New York University School of Music. Soon the young Croatian had gained the status of being something of a secret weapon on strings and he won the recognition of famous colleagues, not only in the USA but also in Europe. He worked with such great artists as Benny Bailey, Gary Peacock, Reggie Workman, Al Foster, Miroslav Vitous, Ron Carter, Jimmy Cobb, Alvin Queen and Adam Nussbaum.
For his dream ensemble, the heroes of his youth, Zjaca wanted to write music that was perfectly fitting. He says: "This was extremely simple, considering the line-up. An almost natural process, an organic symbiosis". This symbiosis continued during the session. Zjaca, Brecker, Patitucci, Mitrovic and Gadd merely had to look at each other, giving a short nod, and the creative energy poured forth like a lava stream. Only one take was required for each one of the twelve titles. Every band member was receptive to the impulses of the others and was immensely communicative. "I never wanted an album for my ego," said Ratko Zjaca. "My intentions were, first and foremost, to achieve an exchange at the highest level. And this actually worked! I cannot possibly describe how much we enjoyed this moment. But it can be heard, it sounds so obvious and pure. I have never felt better during a recording session." And he was never better than on Continental Talk.
„Guitarist Ratko Zjaca has been on the jazz scene for a while but remains a talent deserving of wider recognition. A graduate of Zagreb University who also studied jazz at Rotterdam Conservatory and New York University, Zjaca has either taken master classes or studied individually with giants like Joe Pass, Jim Hall, Bob Brookmeyer, John Abercrombie, and Mick Goodrick, among others. Zjaca recorded several CDs prior to Continental Talk, while both bassist John Patitucci and tenor saxophonist Stanislav Mitrovic have recorded with him previously, with the quartet rounded out by veteran drummer Steve Gadd. Zjaca's opening minor blues "Breakfast in Tokyo" proves to be immediately infectious, with robust solos by Mitrovic, the leader, and Patitucci. Zjaca moves to acoustic guitar for his intimate miniature "At the Crossroads," with Mitrovic added on tenor around its midpoint. Mitrovic also contributed several originals, including the bossa nova-flavored "E Doubt," which showcases guest trumpeter Randy Brecker. Mitrovic switches to soprano for "Inner Ears," engaging in a edgy duet with Gadd in its opening minutes, remaining on the instrument for his plaintive ballad "Feathers." This potent session should help increase the awareness of both Ratko Zjaca and Stanislav Mitrovic.“ (Ken Dryden, AMG)
Ratko Zjaca, guitars
John Patitucci, acoustic bass
Steve Gadd, drums
Stanislav Mitrovic, tenor saxophone, soprano saxophone
Randy Brecker, trumpet 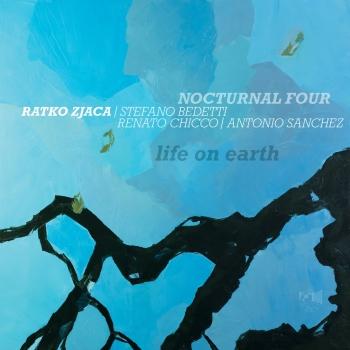 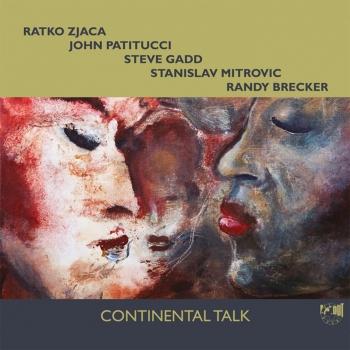 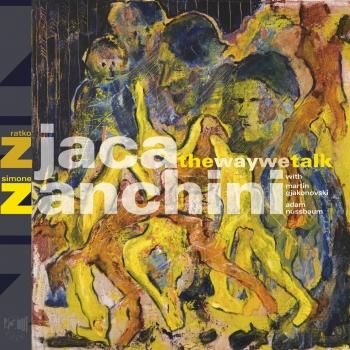 The Way We Talk 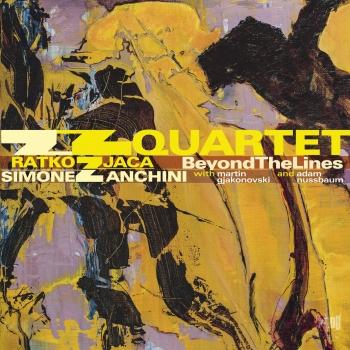 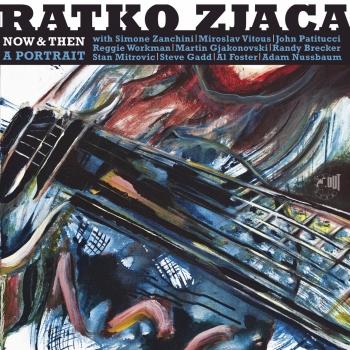 Now & Then: A Portrait 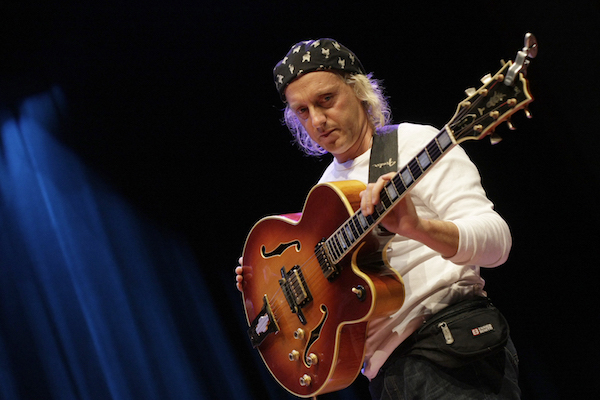 Ratko Zjaca
is an innovative musician, who is widely recognized as a technically advanced guitarist. He is known for being a relentless individualist, which is evidenced in his improvisational style. Ratko has had a prolific and extensive session history as a recording guitarist having played on many released recordings. He is a highly versatile player covering many areas of music but is best known for his work in the modern jazz and improvisation idiom. Ratko has released a number of albums as leader and has performed and recorded with many leading world American and European musicians.
Ratko Zjaca is considered a very gifted stylist, assumes many roles in his macrocosm of music: contemporary guitarist, composer, performer and educator. His unique musical vision absorbs and reflects all manner of music while retaining an enviable individualism and high quality craftsmanship that can span from quiet intimacy to searing intensity. Diverse musical backgrounds, which include jazz, world music, and free improvisation. He has been working on original compositions as well as crafting beautiful and haunting improvisations. He invented a unique style that is fearless, ambitious and volatile. He studied and graduated from Zagreb University. In his drive for the necessary knowledge and the enormous need for studies he sought his refuge in The Netherlands at the Rotterdam Conservatory. There he could get teachings by well-known masters. He also followed masterclasses and personal courses with Joe Pass, Jim Hall, Pat Metheny, Mike Stern, Bob Brookmayer, John Abercrombie, Mick Goodrick, Hariprasad Chaurasia and others.
Unlike some of his colleagues Ratko is not focusing only on saxophone phraseologies, but is continuously expanding the guitar's vocabulary within today's world of music. Whilst improving his performance to create his typical own sound and style, Ratko as a gifted teacher with a loaded teaching schedule, is capable of transposing most advanced phrases and concepts into structures, suitable for every musician. He gives master classes all around the world for guitar and fretless guitar, in countries like Slovenia, the Netherlands, France, Croatia and the United States.
After completing his study at the Rotterdam Conservatory where he studied jazz guitar, composition and Indian classical music, he also studied at New York University School of Music. He started to work with own group and with American trumpet veteran Benny Bailey group. Ratko participated at many international festivals and has been booked for the major club dates at the European and American scene. Ratko has constantly made major efforts to enrich his experience with appearances and recordings. He was also performing and recording with Benny Bailey, Gary Peacock, Reggie Workman, John Patitucci, Al Foster, Jimmy Cobb, Steve Gadd, Alvin Queen, Ron Carter, Randy Brecker, Miroslav Vitous, Jeff Tain Watts, Adam Nussbaum, Kirk Lightsey, Simone Zancini, Anders Bergcrantz, Shawnn Monteiro, Denise Jannah etc.
In April 2000 Ratko recorded 'A Day in Manhattan' in New York with members of John Coltrane and Miles Davis rhythm section, Reggie Workman and Al Foster.
Ratko is currently composing music and working on a new world music project on which he plays baritone, sitar, fretless, soprano, electric and acoustic guitars - this will be the second part of his previous record Shades of Spirit, Fretless Guitar Project.