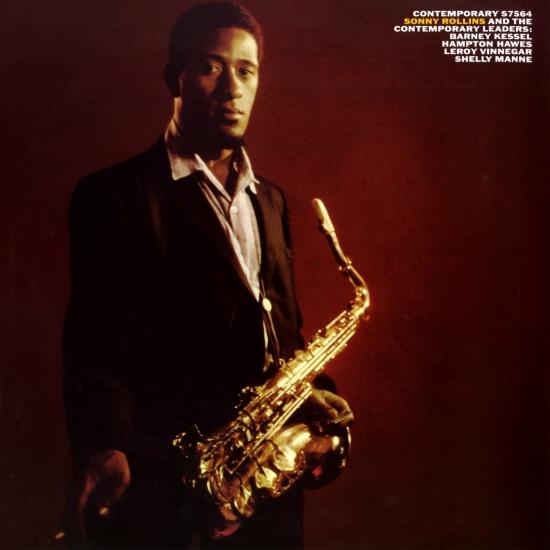 While the personnel on this release were leaders in their own right and contemporaries of Rollins in 1958, the title refers to the fact that the musicians were all recording with their own respective groups for the west coast Contemporary label at the time this album was made. The material is essentially standards, favorites of either the swing or the bop era. "How High The Moon" gets a trio treatment, with Rollins taking his time over the taut accompaniment provided by Kessel and Vinnegar; their bass and guitar given room to stretch out as well.
Hampton Hawes' opening on "Alone Together" is lithe, muscular and spare. Rollins doesn't even enter to solo until after choruses by Hawes and Kessell, giving things a friendly, jam-session atmosphere. Manne lays out on "In The Chapel In The Moonlight," on which the tenorist waxes lyrical to the sure-footed, understated accompaniment of piano, bass and guitar. The presence of these layered, intriguing arrangements makes this record more than a simple all-star blowing date.
„Sonny Rollins's career "out West" in California was, at the time this session was recorded, confined mainly to playing live. He'd done one outstanding record with a California-based band (Out West) but found time to cut some tunes with Hampton Hawes, Leroy Vinnegar, Barney Kessel, and Shelly Manne. As Contemporary Records-founder Lester Koenig remarks in the liner notes, Rollins characteristically unpacked a massive sheaf of music from which to pull tunes for the session. Like Out West, the tunes are at least idiosyncratic. When's the last time a postbop pioneer played anything like "Rock-a-Bye Baby with a Dixie Melody"? And the guitar-bass-sax trio on "I've Found a New Baby" slides off pristinely with its walking bass line, sharp strums, and Rollins's array of tongue effects and wafting tone that comes off its floating plateau to pounce on the melody repeatedly. Rollins sounds enthralled to be in this company, playing big-bodied lines and fluid loops. This is exceptional Rollins, plain and simple.“ (Andrew Bartlett)
Sonny Rollins, tenor saxophone
Hampton Hawes, piano
Barney Kessel, guitar
Leroy Vinnegar, bass
Shelly Manne, drums
Victor Feldman, vibes (on track 4)
Recorded October 20, 21 & 22,1958 at Contemporary's Studio in Los Angeles
Produced by Lester Koenig
Digitally remastered