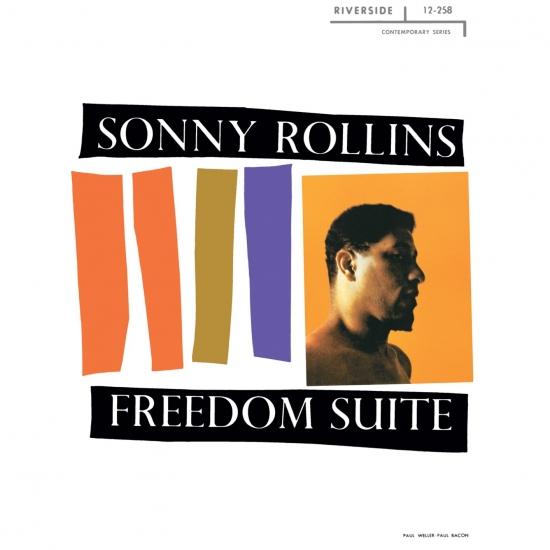 With 15 albums under his belt, Sonny Rollins was poised to make a bold statement with 1958's Freedom Suite. Sporting a Mohawk haircut on the inside cover, Rollins was driven by the political climate at the time, acknowledging and questioning his place in society as an African American in the midst of the Civil Rights Movement. In the nearly 20-minute long title track, comprised of five movements, Rollins and his longtime collaborators drummer Max Roach and bassist Oscar Pettiford were able to dig deep and explore the melodic structure. Side B is comprised of four Broadway showtunes and standards, which Rollins, Roach and Pettiford make their own. An inspired and vibrant boundary-pushing album.
„By February of 1958, when Sonny Rollins recorded Freedom Suite, his political consciousness had risen to match the poetic scope of his music. In addressing his place as a creative artist and an African-American, Rollins recognized that both aspects of his being existed under second-class circumstances, and that it was time for this country to review these inequities. In recording with bassist Oscar Pettiford and drummer Max Roach, Rollins aligned himself with the modern jazz innovators who best exemplified his righteous brand of freedom. Pettiford is particularly inspired on trio and duo versions of "Till There Was You," where he displays an uncanny knack for enunciating lyrical syncopations without losing the flow of the beat or a sense of harmonic structure. His ringing half notes on the head to "Will You Still Be Mine?" set up a vibrant series of Rollins/Roach exchanges, while his charming solo distills the melody into its most swinging components. But it's "Freedom Suite," with its stunning stops and starts, extended variations, thematic interludes, and exhilarating denouement, that invites the most superlatives. Rollins' sense of sustained melodic invention is remarkable, as is his cyclical formal structure. The opening theme, with its affectionate parody of a formal overture, sets the band in motion, as if motifs and contrasting themes criss-cross and collide in a swinging trialogue. A waltz figure and dramatic, extended cadenza introduces one of Rollins' most touching ballads, richly tinted in smoky shades of blue, with some joyous buck and wing by Pettiford and Roach. Finally, a reprise of the waltz theme gives way to a climactic chase, inspiring some of Roach's most fervent, singing breaks, before a return to the opening theme ties it all up.“ (Scott Yanow, AMG)
Sonny Rollins, tenor saxophone
Oscar Pettiford, bass
Max Roach, drums
Recorded February 1958 in New York, New York
Produced by Orrin Keepnews
Digitally remastered