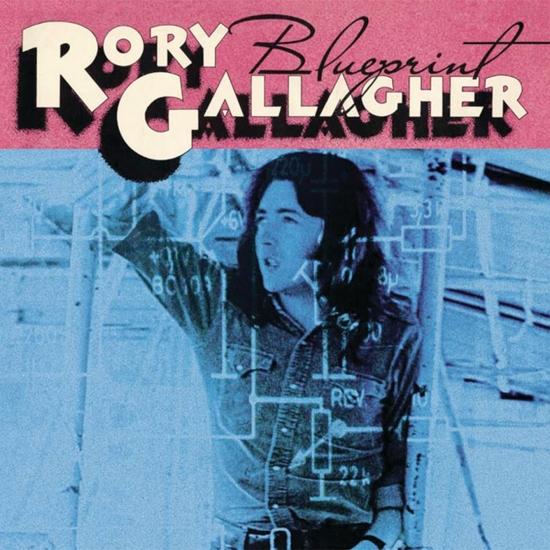 Blueprint is the fourth album by Irish guitarist Rory Gallagher, released as a vinyl record in 1973. With his first band Taste and with his solo band up to this point Gallagher was one of the first guitarists to lead a power trio lineup. With Blueprint Gallagher included a keyboardist for the first time.
After six years working as a trio (guitar, bass, drums), Rory embellished his sound by adding keyboards into the band. The line-up of Rory Gallagher (vocals, guitars), Gerry McAvoy (bass), Lou Martin (keyboards) and Rod De'Ath (drums, percussion), remained together from 1973-78, and would record five albums. “Blueprint was the first”.
"Kicking off with the furious "Walk on Hot Coals" where Rory Gallagher's stinging guitar and Lou Martin's insistent piano pounding spar within the context of one of Rory's classic rockers, the album presents a well rounded picture of Gallagher's eclectic influences. A jaunty, acoustic run through Big Bill Broonzy's "Banker's Blues" (oddly credited to Gallagher), the ragtime "Unmilitary Two-Step" as well as an unusually straightforward country tune "If I Had a Reason" with Rory on lap-steel and Martin doing his best honky-tonk, effectively break up the blues-rock that remains the soul of the album. The album's centerpiece, a brooding "Seventh Son of a Seventh Son" finds the band locked into a swampy groove for over eight minutes as Gallagher abbreviates his own solo providing room for Martin's aggressive piano. On "Hands Off" the guitarist even picks up saxophone, and he shows off his spooky Muddy Waters' inspired slide on the train chugging "Race the Breeze," one of the guitarist's best tunes. The final two bonus tracks tacked on for this reissue don't add much of interest; an early, shuffle version of "Stompin' Ground" lacks the tension of the song that later showed up as the only studio tracks on the live Irish Tour 1974 album, and Roy Head's "Treat Her Right" sounds like a soundcheck warm-up, which it probably was. Concise track-by-track liner notes from Rory's brother Donal provide useful background information, and the remastered sound taken from the original tapes is a revelation, with Gallagher's guitar parts and especially vocals, clear and precise in the spiffed up mix." (Hal Horowitz, AMG)
Rory Gallagher, guitars, harmonica, mandolin, saxophones, vocals
Gerry McAvoy, bass
Lou Martin, keyboards, some guitar
Rod de'Ath, drums, percussion
Recorded December 1972 at Marquee Studios, London; Polydor Studios, London
Produced by Rory Gallagher
Digitally remastered