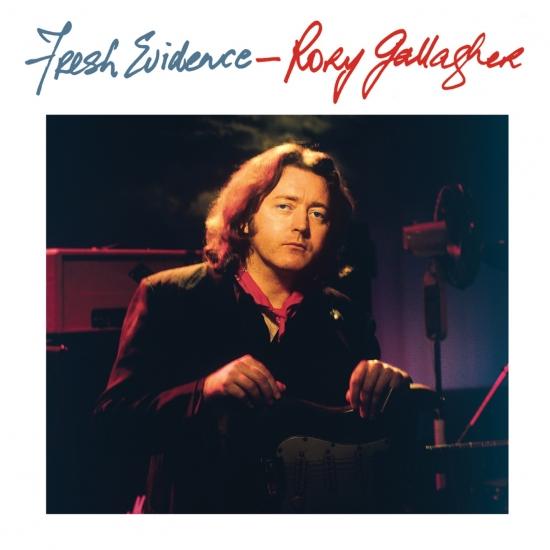 Fresh Evidence is Rory Gallagher's eleventh and last studio album, his fourteenth album overall. The album was originally released on 1st May 1990 and was recorded at Maison Rouge, Redan Recorders, Music Station and Audio One. This 2012 remaster used the original vinyl artwork and 1/4" tapes so that they look and sound exactly as Rory intended. “Perhaps the most important achievement of "Fresh Evidence" is in re-establishing Rory as something more than an electric guitar virtuoso. Here is the proof that the man is a master, someone with a supreme feel for the instrument and the song, whatever its mood” Carol Clerk, Melody Maker.
"There was no way that Rory Gallagher could have known that Fresh Evidence would be his last recording, but in retrospect, it is a good summary of all that is fine and some that is frustrating about his work. The first few tracks are competent but less than perfect; "'Kid' Gloves" is yet another weak song that is based on his well-known love of crime fiction, and "The King of Zydeco" shows that Gallagher may have liked zydeco music a lot, but he doesn't sound natural playing it. Things pick up on "Middle Name," which sounds a lot like the Doors' "The Wasp" but has some sharp soloing, and things really get rolling on "Ghost Blues." From this point on, it seems that Gallagher wanted to prove his mastery of every style of blues, and amazingly, he succeeds. The Delta blues of "Heaven's Gate" shows his mastery of the form, and the jazzy, swinging Chicago blues instrumental "The Loop" is a classic track. The very best was saved for last: the thundering "Slumming Angel." Everything is absolutely together here, the distinctive voice belting out a great simple lyric over a hammering rhythm section and a heaping helping of guitar, guitar, guitar. For all that, it starts slow and has a few tracks that sound like filler, albeit tasty filler. Nevertheless, Fresh Evidence showed that even after over 20 years of reinterpreting various strains of blues, there was plenty of spirit and creativity left in the great Irish rocker." (Richard Foss, AMG)
Rory Gallagher, vocals, electric and acoustic guitars, dulcimer, mandolin and electric sitar
Gerry McAvoy, bass
Brendan O'Neill, drums
John Cooke, keyboards
Additional musicians:
Lou Martin, piano
Mark Feltham, harmonica
Geraint Watkins, accordion
John Earle, tenor saxophone, baritone saxophone
Ray Beavis, tenor saxophone
Dick Hanson, trumpet
Recorded Maison Rouge, Redan Recorders, Music Station and Audio One
Produced by Rory Gallagher
Digitally remastered