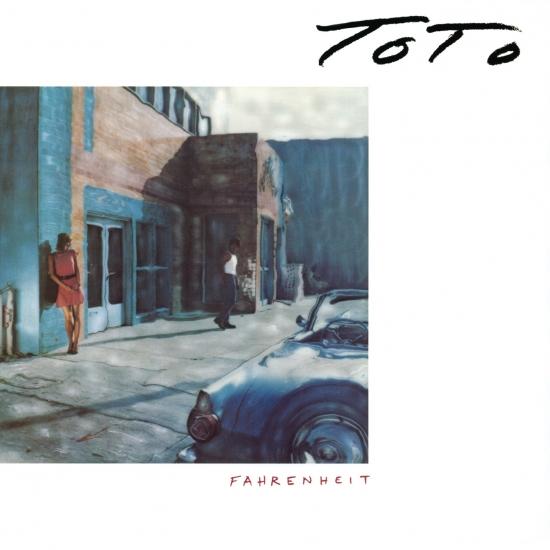 Fahrenheit is the sixth studio album by Toto, released in 1986. It was their first album to feature Joseph Williams on lead vocals. Former lead singer Fergie Frederiksen was fired due to problems with his ability in the studio. However, he sings backing vocals on the song "Could This Be Love". It was also the last Toto album until Toto XIV in 2015 to feature keyboardist Steve Porcaro as a permanent member, as he left after the Fahrenheit tour. The album failed to go gold until 1994,[4] but featured two top forty singles in "I'll Be Over You" (#11, #13 Can.) and "Without Your Love" (#38, #77 Can.). "I'll Be Over You" featured Michael McDonald on backing vocals, who also made an appearance in the song's music video.
Fahrenheit is a typical in-between album, between the heavier experiment of Isolation and the second time Toto found their sound, just like on Toto IV, on The seventh one. Fahrenheit is the most soulful and funky Toto album, with the classic Lukather/Goodrum ballad I'll be over you.
On Fahrenheit Toto got their third lead vocalist Joseph Williams, who left the band after The seventh one. From the beginning he participated pretty much in songwriting for Toto. "Joe is a fantastic vocalist and musician. He's a son of composer John Williams. He was perfect for Toto. But Joe was in the middle of a personal development that kept him from the right drive for the band. He had some personal problems, so he couldn't perform every night. We went crazy. (...) Basicly he was a perfect Toto member, as a person and as a musician. It would be great to work with him again in the future." (Mike Porcaro, Oor, October 1992).
"Miles... hmm, Steve Porcaro was with Miles at Jeff's home studio when Miles cut Human nature and Miles dug our vibe and Paich and I had written Don't stop me now and we played it for Miles and he dug it and he said he would do it for us ... for FREE. Jeff and him traded personal art work as the price. Really cool stuff. Miles heard Fahrenheit when it was done and called me on the phone and asked me to join his band... We were leaving on that tour and I had to say no. I was honored and would have loved to have done it, I told him to call Robben Ford. He did, the rest is history." (Steve Lukather)
Joseph Williams, lead vocals (1, 2, 4, 6-10), backing vocals
Steve Lukather, guitars, backing vocals, lead vocals (3, 5)
David Paich, keyboards, vocals
Steve Porcaro, keyboards
Mike Porcaro, bass
Jeff Porcaro, drums & percussion
Additional musicians:
Joe Porcaro, percussion (7, 10)
Lenny Castro, percussion (1, 2, 4, 5, 7, 8, 9)
Jim Keltner, percussion (9)
Steve Jordan, percussion (9)
Jerry Hey, trumpet (1, 6), additional horn arrangements (1, 6)
Tom Scott, saxophone (6)
Gary Grant, trumpet (1, 6)
Chuck Findley, trumpet (1, 6)
Charlie Looper, trombone (1)
Bill Reichenbach, trombone (1)
Don Henley, backing vocals (9)
Michael McDonald, backing vocals (5)
David Sanborn, saxophone (6, 9, 10)
Miles Davis, trumpet (10)
Amin Bhatia, synthesizer intro (6)
Paulette Brown, backing vocals (3)
Tony Walthes, backing vocals (3)
Michael Sherwood, backing vocals (1, 9)
Fergie Frederiksen, backing vocals (8)
Digitally remastered