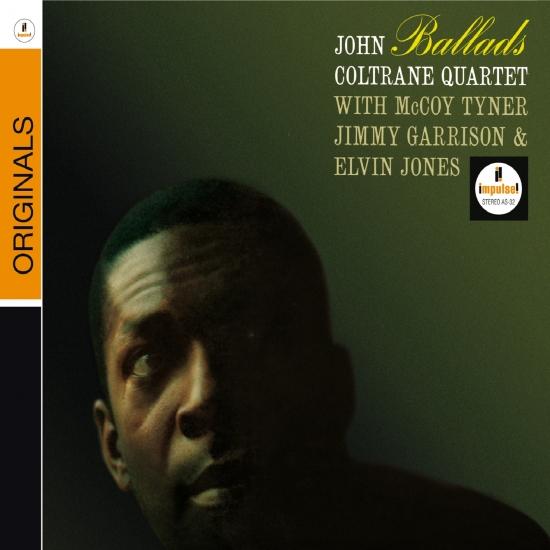 Ballads is the fifth album released on Impulse! Records by the John Coltrane Quartet. McCoy Tyner, Elvin Jones and Jimmy Garrison join Trane on one of his most intimate, introspective sessions. Includes their gorgeous interpretations of All or Nothing at All; What's New; I Wish I Knew , and the rest of this 1962.
It was recorded in December 1961 and 1962, and released on the Impulse! label in 1962 as A-32 and later AS-32 (the 's' is for 'stereo'). In 1962 John Coltrane was under strong criticism from conservative reviewers who had labeled his unorthodox, extended performances as 'anti-jazz.' As an means to respond, Coltrane and his Quartet entered the studios to record this classic collection of both notable and obscure ballads.
Critic Gene Lees stated that the quartet had never played the tunes before. 'They arrived with music-store sheet music of the songs' and just before the recordings, they 'would discuss each tune, write-out copies of the changes they'd use, semi-rehearse for a half hour and then do it'. All the pieces were recorded in one take, except for 'All or Nothing at All'.
During the early '60s, the contentious critical reaction to John Coltrane's music got so over-the-top that some reactionaries branded his work with Eric Dolphy as 'anti-jazz.' Having already recorded the exploratory AFRICA/BRASS and LIVE AT THE VILLAGE VANGUARD, Coltrane went along with producer Bob Thiele's suggestion that he do an album of BALLADS to silence nay-sayers once and for all. BALLADS, DUKE ELLINGTON & JOHN COLTRANE and JOHN COLTRANE AND JOHNNY HARTMAN for a triptych of 'traditional' recordings, italicizing the saxophonist's ability to swing in a classic vein, while underscoring his sensitivity as a ballad player. He even managed to impress the moldy fig who penned the original liner notes to BALLADS. From the gentle opening strains of 'Say It (Over And Over Again),' the saxophonist imparts all the tender yearning and romantic empathy of a mature, compassionate adult. Given his predilection for technical complexities, Coltrane avoids any hint of emotional grandstanding, allowing only for subtle melodic embellishments. On 'You Don't Know What Love Is' and 'What's New' he displays a glorious tone, achieving a remarkably human vocal timbre in the upper registers, indulging in more pronounced harmonic variations, as the Tyner-Garrison-Jones rhythm axis subtly shifts gears to accomodate these intricacies. Without straying far from the basic themes or giving in to cheap sentiment, the saxophonist sustains a gorgeous melodic focus throughout BALLADS, marking this recital as another John Coltrane masterpiece. PREVIEW :Q (10/95, p.137) - 4 Stars - Excellent - '...a hard, unfaltering attack and furiously intense, extended improvisations that bordered on free-jazz. BALLADS was a timely reminder of the tenor saxophonist's matchless lyricism and exquisite tone...'Down Beat (11/95, p.73) - 4 Stars - Very Good - '...BALLADS...has always been about the celebration of pitch and melody. The band...hadn't played any of the tunes prior, but its proficiency leaned toward perfection.'
John Coltrane, Tenor & Soprano Saxophone
McCoy Tyner, Piano
Jimmy Garrison, Bass
Elvin Jones, Drums
Recorded at Van Gelder Studio, Englewood Cliffs, New Jersey.
Disc One, track 7 and Disc Two, tracks 3–14 recorded on December 21, 1961.
Disc One, tracks 6 and 8 recorded on September 18, 1962.
Disc One, tracks 1–5, and Disc Two, tracks 1 and 2 recorded on November 13, 1962.
Disc Two, tracks 1–5 and 7–14 are previously unissued.
Original recordings produced by Bob Thiele.
Original recordings engineered by Rudy Van Gelder
Re-mastered in 96/24