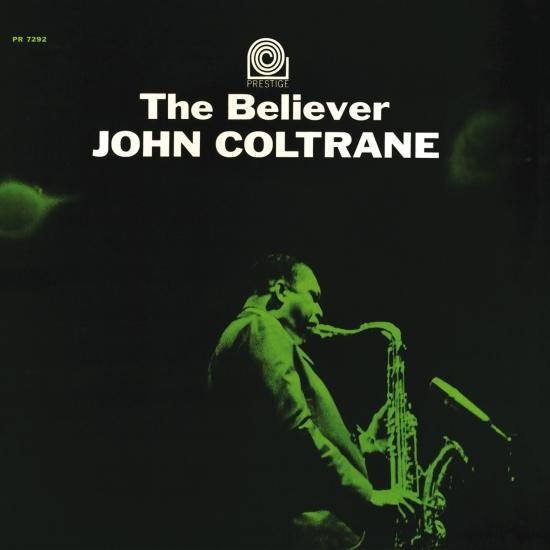 On this outing compiled from sessions in 1957 and 1958, one of the many stellar releases for the Prestige Label, John Coltrane is fine form. Backed by a bigger cast of players this time, which created a somewhat different sound, Coltrane showed off his still blossoming mastery of his art. Jazz greats like Red Garland, Paul Chambers, and Freddie Hubbard play along side Coltrane on this set. This album also offers a unique tuba/tenor sax interplay on two cuts, that showed how Coltrane loved to experiment with different sounds and styles. The Believer offers two bonus tracks as well. An excellent album and a truly overlooked Coltrane classic. A must have for all Coltrane fans.
„The Believer offers an early glimpse at the talents of a still-developing John Coltrane. Recorded in the late '50s while he was still a member of the Miles Davis Sextet, this early solo outing finds Coltrane confident but just beginning to explore the kind of modalities with which he would soon revolutionize the world of jazz. One of the reasons Coltrane is so at ease here is the familiar setting: he's joined by fellow Davis cohorts Paul Chambers and Red Garland, among others. Drummer Louis Hayes provides a Latin-inflected beat on "Nakatini Serenade," as Coltrane and Donald Byrd soar above the rhythm section. The understated Rogers & Hammerstein standard "Do I Love You Because You're Beautiful" presents Coltrane the balladeer waxing lyrical over the subtle dynamics. Things to come are hinted at briefly in flurries of notes here and there, and it's fascinating to listen to the early work of this developing genius.“ (AMG)
Tracks 1-3:
John Coltrane, tenor saxophone
Red Garland, piano
Paul Chambers, bass
Donald Byrd, trumpet (tracks 1-2)
Freddie Hubbard, trumpet (track 3)
Louis Hayes, drums (tracks1-2)
Art Taylor, drums (track 3)
Tracks 4-5:
John Coltrane, tenor saxophone
Gil Coggins, piano
Ray Draper, tuba
Spanky DeBrest, bass
Larry Richie, drums
Recorded December 20, 1957 (4-5), January 10, 1958 (1-2), December 26, 1958 (3) at Van Gelder Studio, Hackensack
Produced by Bob Weinstock and Esmond Edwards (track 3)
Digitally remastered