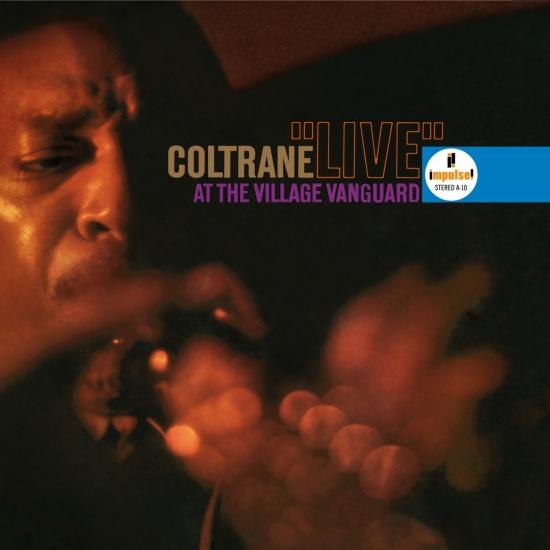 Coltrane "Live at the Village Vanguard“ is the tenth album by jazz musician John Coltrane and his first live album, released in 1962 on Impulse Records. It is the first album to feature the members of the classic quartet of himself with McCoy Tyner, Jimmy Garrison, and Elvin Jones. In contrast to his previous album for Impulse!, this one generated much turmoil among both critics and audience alike with its challenging music.
„This set documents the four-night stand by John Coltrane (sax) and his quintet at the Village Vanguard in New York City, November 1 -- 5, 1961. Although these are not newly discovered tapes -- as the majority of the selections have turned up on no less than five separate releases -- their restoration is significant in assessing motifs in Coltrane's [read: multi-show] live appearances. Coltrane is accompanied by an all-star ensemble of Eric Dolphy (alto sax/bass clarinet), Garvin Bushell (oboe/contrabassoon), Ahmed Abdul-Malik (oud), McCoy Tyner (piano), Jimmy Garrison (bass), Reggie Workman (bass), Elvin Jones (drums), and Roy Haynes (drums). Their presence is as equally vital as Coltrane's -- inspiring as well as informing the dimensions of improvisation. With the knowledge that the entire run was being documented to create some sort of retail document, Coltrane chose nine specific compositions to concentrate on. The choice of material likewise had a tremendous impact on the personnel of the band -- evidenced by Bushnell's contributions during "Spiritual" and Abdul-Malik's within the context of the extended "India." Each set bears its own distinctive shading and emphasis. Parties wishing to hear the run in its entirety are encouraged to check out the multi-disc Complete 1961 Village Vanguard Recordings (1997) as there are multiple takes of the same songs. This allows even the most unsophisticated jazz consumer the opportunity to note the difference in the various versions, while contrasting the player's widely diverse performance styles. The highly recommended box set also includes a nine-panel fold out poster, 48-page liner notes booklet -- with a complete discography for the included material -- and other ephemera, such as rarely published photographs.“ (Lindsay Planer, AMG)
John Coltrane, soprano and tenor saxophone
Eric Dolphy, bass clarinet on "Spiritual"
McCoy Tyner, piano on side one
Reggie Workman, bass on side one
Jimmy Garrison, bass on side two
Elvin Jones, drums
Recorded November 2–3, 1961 at Village Vanguard, New York City
Produced by Bob Thiele
Digitally remastered