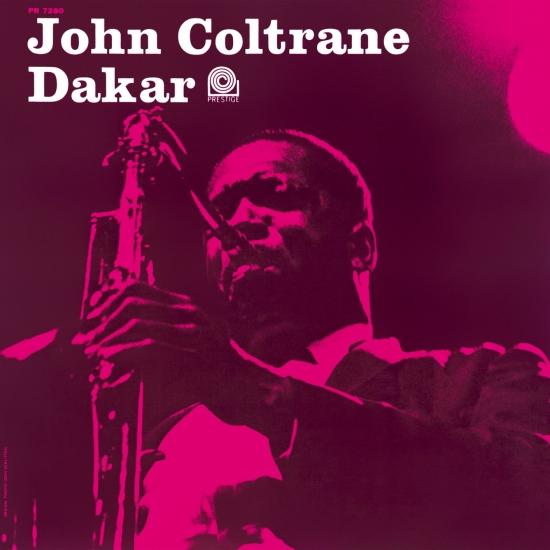 A Coltrane album? No, a Pepper Adams album, Pepper as leader, rebranded as a Coltrane album to capitalise on his rising fame in the early Sixties. What is distinctive about this album is double baritone sax. Pepper Adams and Cecil Payne, in addition to Coltrane. No difficulty in telling the two apart: Payne is smooth and polished, Adams is fiery, energetic. Coltrane is the young Coltrane of 1957, a year after departing Miles Davis,and his first record as leader, Coltrane, which featured another baritone – Sahib Shihab. A good year for the bari, 1957.
Dakar is the capital of Senegal, on the Cap-Vert Peninsula on the Atlantic west coast of Africa. Perhaps its name filled the bill of a suitably exotic title, as there doesn’t seem any obvious connection.
„Dakar (1957) presents half-a-dozen numbers recorded April 20, 1957 by an ensemble credited as the 'Prestige All-Stars.' On the bandstand for this date are John Coltrane (tenor sax), Cecil Payne (baritone sax), Pepper Adams (baritone sax), Mal Waldron (piano), Doug Watkins (bass), and Art Taylor (drums). Although at the time these were considered 'leaderless' units, upon hearing the interaction of the participants, modern ears might desire to qualify that statement.
The Latin-flavored title track 'Dakar' finds Coltrane adapting his solo to faultlessly conform to Payne and Adams' comparatively fuller-bodied involvement. The brooding chord progressions take on dark overtones with Coltrane joining Waldron as they burst forth fuelled by the soulful brass section. 'Mary's Blues' is a treat for sax lovers as Adams -- who penned the number -- almost immediately raises the musical stakes for Coltrane. The differences in their respective presentations offer a contrast that complements the cool refinement of Adams and Pepper when juxtaposed with Coltrane's frenetic flurries. Particularly engaging are the sequence of four-bar blasts from the horn players, just prior to Coltrane pushing the combo through their paces. On 'Route Four' the strongest elements of each player surface, creating one of the platter's brightest moments. Right out of the box, Waldron unleashes line upon line of masterful lyricism. The driving tempo keeps the instrumentalists on their toes as Coltrane is sandwiched between the undeniably and equally inspired Payne and Adams. Here, the urgency of Coltrane's tenor sax clearly tests the boundaries of the Taylor/Watkins rhythm section. The moody and sublime ballad 'Velvet Scene' is a Waldron composition containing some of the author's strongest individual involvement as he interjects his expressive keyboarding directly into the melody. If the album is flawed, that may well be due to Coltrane's inability to deliver during 'Witches' Pit.' Perhaps because he is the first soloist, there seems to be no immediate direction to his playing. In a highly unusual move, he simply trails off rather than concluding his portion with his usual command and authority. 'Cat Walk' restores Coltrane's sinuous leads during a couple of jaunty double-time excursions that tread gingerly around the catchy tune. Jazz enthusiasts -- especially lovers of Thelonious Monk -- should easily be able to discern Adams' nod to ''Round Midnight.' (Lindsay Planer, AMG)
John Coltrane, tenor saxophone
Cecil Payne, baritone saxophone
Pepper Adams, baritone saxophone
Mal Waldron, piano
Doug Watkins, bass
Art Taylor, drums
Recorded April 20, 1957 at Van Gelder Studio, Hackensack
Produced by Teddy Charles
Digitally remastered