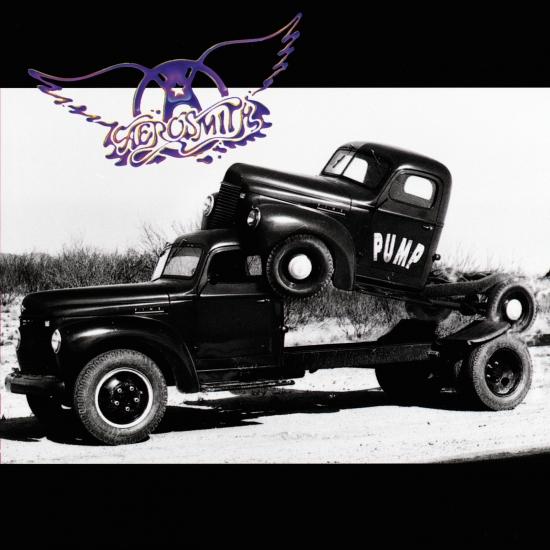 Aerosmith surprised everyone when their 1987 album, Permanent Vacation, was a success, coming as it did after several releases that had done nothing but verify the belief that the band had peaked a decade earlier. 'Pump' (1989) followed its radio-friendly predecessor and proved the Boston quintet's comeback was no fluke. Hits like 'Love in an Elevator' and 'Janie's Got a Gun' were ubiquitous on MTV and radio at the time, while the album in its entirety had enough substance to warrant repeated listens. 'What it Takes' closes the album and finds the band showing off their deft power-ballad abilities, while carefully straddling the line of cheese without ever succumbing to it. Aerosmith would sustain their commercial success with the subsequent Get a Grip, but it would not contain the same balance of artistic and populist intent that puts PUMP amongst their best records.
'...Aerosmith stay clean and conquer the world. Cover shot of 2 trucks copulating still indicative of silly, sleazy sounds within. Pregnant with hits: 'Love In An Elevator', 'Janie's Got A Gun', 'The Other Side'.' (Q-Magazine)
Steven Tyler, vocals, keyboards, harmonica
Joe Perry, vocals, guitar
Brad Whitford, guitar
Tom Hamilton, bass
Joey Kramer, drums, percussion
Additional musicians:
Catherine Epps, spoken vocals
John Webster, keyboards
Bob Dowd, background vocals
Bruce Fairbairn, backing vocals
The Margarita Horns:
Tom Keenlyside, saxophone
Ian Putz, baritone saxophone
Henry Christian, trumpet
Recorded 1989 at Little Mountain Studios, Vancouver, Canada
Digitally remastered