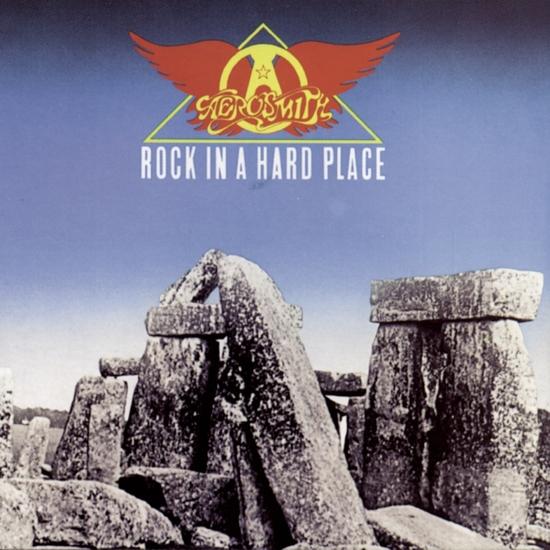 „Rock In A Hard Place“ was not only the first '80s Aerosmith album, it was also the only album to not feature founding members Joe Perry and Brad Whitford. Perry left in the middle of making the prior album, „Night in the Ruts“, and Whitford hung around long enough to play rhythm guitar on this record's excellent 'Lightning Strikes.' Both left as a result of personal problems and were replaced by guitarists Jimmy Crespo and Rick Dufay.
Although Perry's contributions as a collaborator with Steven Tyler were missed, Crespo did a good job taking up the slack. Among the more notable songs he penned with Tyler were the slide guitar-drenched locomotive 'Bolivian Ragamuffin,' the sassy strut 'Jig is Up,' and the salacious 'Jailbait.' Aerosmith took the opportunity for a little studio experimentation „Rock In A Hard Place“ as well. Vocoders were used on 'Prelude to Joanie,' which segued smoothly into the Indian-flavored 'Jaonie's Butterfly,' foreshadowing the band's later cultural dabbling on 1997's „Nine Lives“. Also included was a surprising, slow-burn reading of Julie London's 1955 hit 'Cry Me a River.'
Steven Tyler, lead vocals
Jimmy Crespo, guitar, backing vocals
Rick Dufay, guitar
Tom Hamilton, bass
Joey Kramer, drums
Additional musicians:
Brad Whitford, rhythm guitar ('Lightning Strikes')
Paul Harris, piano ('Push Comes to Shove')
John Turi, saxophone ('Rock in a Hard Place (Cheshire Cat)')
Reinhard Straub, violin ('Joanie's Butterfly')
John Lievano, acoustic guitar ('Joanie's Butterfly')
Recorded from 1981–1982 at The Power Station and Criteria Studios
Engineered by Godfrey Diamond
Produced by Jack Douglas, Steven Tyler, Tony Bongiovi
Digitally remastered