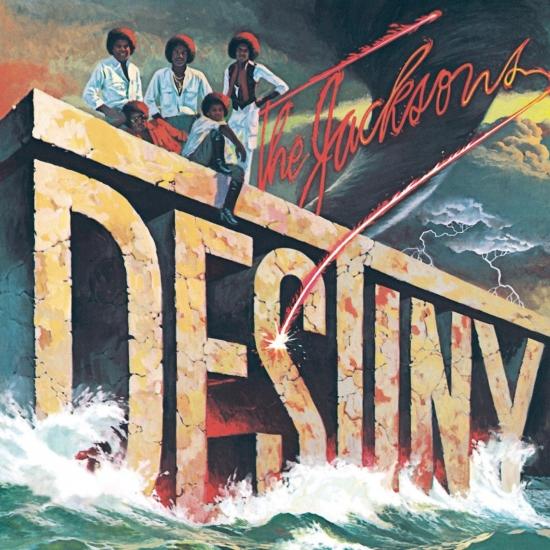 After Destiny‘s opening thumping baseline, funky guitar chords, and Michael Jackson's hiccuping 'heeee-heee-heeee,' there's only one sensible thing to do--blame it on the boogie. Or blame it on the Jacksons' 1978 platinum-selling album for being so damn good. The tenor of the times was finally right for the band, and everyone involved is on top form. With songs all written and produced by the Jacksons, the emphasis is on booty-shaking music with heart and real soul. Within a year Michael Jackson's OFF THE WALL album, on the charts for 52 weeks, would make him a force to be reckoned with. But on Destiny, Michael's passion and desire is palpable, giving the album its real power and edge.
Besides 'Blame it on the Boogie,' Destiny also features the disco-combustible 'Shake Your Body (Down to the Ground).' Just about all the songs here are superlative, with standouts including Michael's delicately displayed anguish on the tender 'Push Me Away,' and the surprisingly poignant soul-searching 'Destiny' which presciently foretells the situation the boys were soon to face as Michael's popularity soared.
„The brothers' third post-Motown album as the Jacksons was their most successful release, both commercially and creatively, since 1974's Dancing Machine. Their first two Epic albums, where they aligned with Gamble, Huff, and other Philly soul stalwarts, had some strong singles but were very uneven and somewhat awkward in stretches, and this time out, they wrote and produced on their own. Backed by an arsenal of up-and-coming and veteran L.A. session musicians -- including guitarists Michael Sembello and Paul Jackson, Jr., drummer Rick Marotta, arranger Thomas 'Tom Tom 84' Washington, and keyboardist Greg Phillinganes, the last of whom played on just about everything involving a Jackson family member through the early '90s -- Destiny did much more than set the stage for Michael's Off the Wall. The sunny 'Blame It on the Boogie' and the dazzling Off the Wall prelude 'Shake Your Body (Down to the Ground)' were the album's only singles, upbeat numbers that peaked at number three on the Black Singles chart, but the mature Michael showcase ballad 'Push Me Away' (pointing toward 'I Can't Help It' and 'Human Nature') and the alternately somber and uplifting 'Bless His Soul,' containing a startling confession from Michael ('There is no life for me at all/'Cause I give myself at beck and call') added an impressive level of depth to the Jacksons' discography.“ (Andy Kellma, AMG)
Michael Jackson, lead vocals
Jackie Jackson, backing vocals
Marlon Jackson, backing vocals
Tito Jackson, guitars, backing vocals
Randy Jackson, congas, percussion, backing vocals
Roland Bautista, guitar
Paul Jackson, Jr., guitar
Nathan Watts, bass
Gary King, bass
Paulinho da Costa, percussion
Ricky Lawson, drums
Ed Greene, drums
Greg Phillinganes, keyboards, synthesizers
Laudir de Oliveira, congas
Claudio Slon, congas
Rick Marotta, drums, percussion
Michael Sembello, guitar, bass
Tom Tom 84, horn arrangements
Clare Fischer, string arrangement
Jerry Hey, arrangement
Recorded 1977–1978 at Dawnbreaker Studios, San Fernando, California
Engineered by Don Murray, Michael Barbiero, Peter Granet
Produced by The Jacksons
Digitally remastered