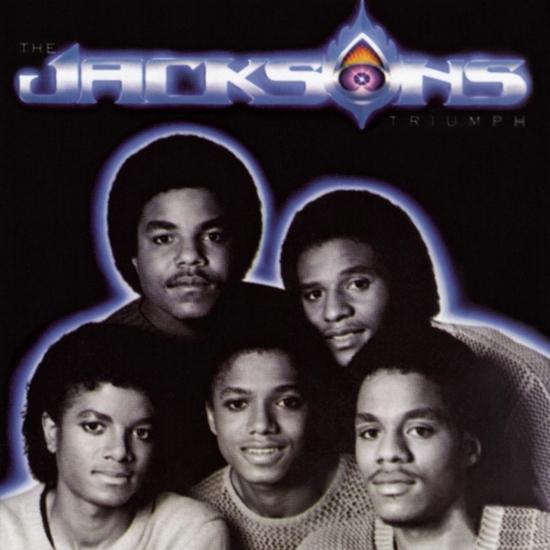 The Jacksons kicked open the door to the '80s with the appropriately titled „Triumph“. Michael Jackson's gigantic success a year earlier with his platinum-selling „Off The Wall“ fueled this album, which heavily features his scorching vocals and hitmaking production sensibilities.
With all songs written and produced by the Jacksons, the album begins with the orchestral bombast of 'Can You Feel It,' complete with child and adult choirs; it's a big song with a monumental production. Entering a new phase of their career mixing spooky spirituality with unimpeachably funky beats, the Jacksons feature a number of hits, notably the sentimental boogie of 'Lovely One,' the paranoid lyrics and chugging disco beat of 'Walk Right Now,' and Michael's downright eerie 'This Place Hotel' (aka 'Heartbreak Hotel'), which may well be where he met Billie Jean.
„Released during the summer of 1980, just as the hits from Michael's Off the Wall were sliding off the charts, Triumph became the Jacksons' first Top Ten pop album since 1972's Lookin' Through the Windows. This despite the album-opening 'Can You Feel It,' promoted with a spectacle of a video that made the Jacksons into gigantic superheroes capable of transforming bridges into bendable rainbow tubing, stalling at number 77 on the Hot 100. It didn't make much of an impact on the R&B chart either, but then again, its supernatural anthemic stomp is more a fireworks program finale than something as small scale as a mere single. As on 1978's Destiny, the Jacksons wrote and produced the material, this time with keyboardist Greg Phillinganes bumped up to associate producer, and with an uptick in star backing -- including but not limited to Ronnie Foster, Phil Upchurch, Webster Lewis, Michael Boddicker, and Ollie Brown, as well as Triumph holdovers Michael Sembello, Thomas Washington, and Nathan Watts. The other singles, including 'Lovely One' (very nearly 'Don't Stop 'Til You Get Enough' reheated) and 'This Place Hotel' (an elaborate six-minute affair, written and arranged by Michael, that could have easily swollen to greater length) propelled the album into sales greater than that of Destiny, and it's equally durable (and markedly slicker) all around.“ (Andy Kellman, AMG)
Michael Jackson, lead and backing vocals
Jackie Jackson, backing vocals, lead vocals on 'Wondering Who'
Tito Jackson, guitar, backing vocals
Marlon Jackson, backing vocals, timpani, co-lead vocals in 'Give It Up'
Randy Jackson, percussion, backing vocals, co-lead vocals in 'Can You Feel It'
Nathan Watts, bass
Mike McKinney, bass
Clay Drayton, bass
Ronnie Foster, keyboards
Greg Phillinganes, synthesizer
Michael Boddicker, synthesizer
Webster Lewis, synthesizer
Michael Sembello, guitar
Phil Upchurch, guitar
Paul Jackson, Jr., guitar
David Williams, guitar
Greg Poree, guitar
Ollie E. Brown, drums
Paulinho da Costa, percussion
Lenny Castro, percussion
Gary Coleman, vibraphone
Gary Herbig, flute
Bill Reichenbach, horns
Kim Hutchcroft, horns
Larry Hall, horns
Jerry Hey, horns
La Toya Jackson, voice scream
Julia Tillman Waters, backing vocals
Maxine Willard Waters, backing vocals
Stephanie Spruill, backing vocals
Audra Tillman, backing vocals
Brian Stilwell, backing vocals
Brigette Bush, backing vocals
Gerry Gruberth, backing vocals
Lita Aubrey, backing vocals
Peter Wade, backing vocals
Rhonda Gentry, backing vocals
Roger Kenerly II, backing vocals
Soloman Daniels, backing vocals
Yolanda Kenerly, backing vocals
Recorded Late June 1979 – June 1980 at Capitol Records Studios; Hollywood Sound; Davien Sound; Sound City; Devonshire Sound, & Westlake Audio, Hollywood, CA
Engineered by Tom Perry
Produced by The Jacksons
Digitally remastered