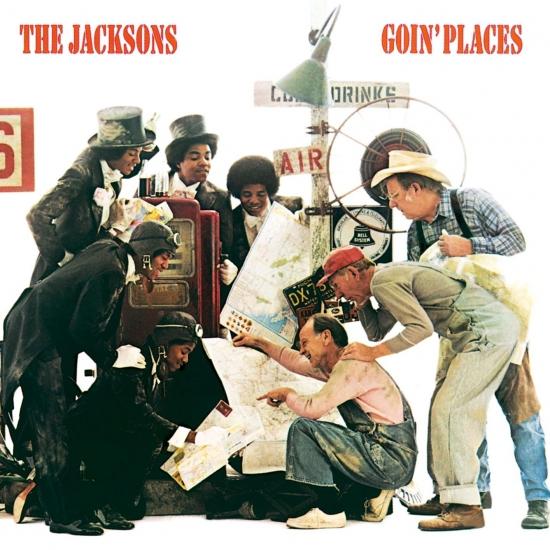 The Jacksons' second album with producers Kenny Gamble and Leon Huff, „Goin' Places“ doesn't quite fulfil the promise of their debut a year previous. However, with stellar production work from the production team, the whole album is polished and clean sounding.
Michael's singing is passionate, while the album is stylistically divided between making music to boogie to, such as "Music's Takin' Over," "Jump for Joy," and "Do What You Wanna," and the slow grooves of "Heaven Knows I Love You, Girl" and "Find Me a Girl." The Jacksons were masters of these two styles, though the choice of material probably reflects a record company unsure how to market these one-time teenaged pop stars who were fast becoming adults. The Jacksons' next album, „Destiny“, would give them a chance to exert more control, and became the first in a long string of hits.
Michael Jackson, lead and backing vocals
Tito Jackson, lead (on tracks 6 & 7) and backing vocals, guitars
Marlon Jackson, lead (on track 7) and backing vocals
Jackie Jackson, lead (on track 7) and backing vocals
Randy Jackson, lead (on track 7) and backing vocals, congas
Additional musicians:
Charles Collins, drums
David Cruse, percussion
Larry Washington, percussion
Roland Chambers, guitars
Michael "Sugar Bear" Forman, guitars
Dennis Harris, guitars
Leon Huff, keyboards, piano
Dexter Wansel, keyboards, piano
Recorded December 1976 – August 1977 at Sigma Sound Studios, Philadelphia, PA.
Engineered by ay Mark, Joe Tarsia
Mastered at Frankford/Wayne Recording Labs, Philadelphia, PA.
Produced by Kenneth Gamble & Leon Huff, McFadden & Whitehead, Victor Carstarphen, Dexter Wansel, The Jacksons
Digitally remastered