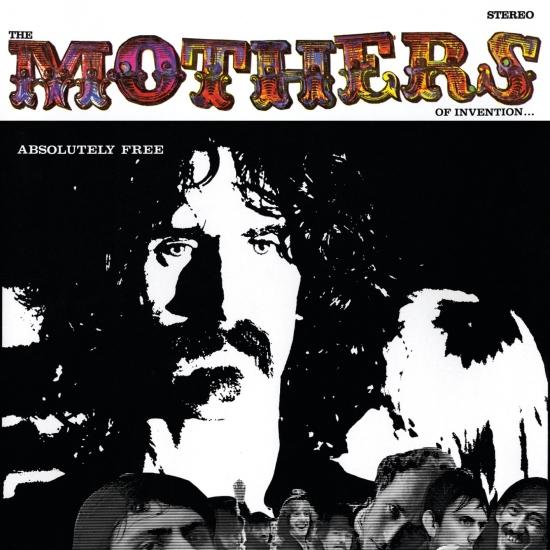 Absolutely Free is the second studio album by American rock band the Mothers of Invention, released on May 26, 1967 by Verve Records. Much like their 1966 debut Freak Out!, the album is a display of complex musical composition with political and social satire.
Absolutely Free, in retrospect, was an early favorite in my admittedly pretty cursory exploration of Frank Zappa. It was more elaborate than Freak Out!, and it seemed more coherent than We’re Only In It For The Money. It also fueled my pet peeves about songs being arbitrarily cut into multiple tracks, but that’s a story for another time. As it is, Absolutely Free is a unique experience, especially for 1967. Zappa and others would very quickly go beyond this one’s boundaries, but the tension between poppy white boy blues and modern classical is here, and it’s what makes Absolutely Free tick.
This album is nominally divided into two “suites”; the first one is creatively also named “Absolutely Free”. In this context, “Plastic People” has to be one of the best introductions to an album ever. After the… deranged introduction (fans of “Louie Louie” may want to look away), it perfectly demonstrates the tight balance Zappa traditionally walks between matching contemporary forms of rock, incisive satire, and intricate musicianship and songwriting. Afterwards, this first half focuses more on elaborate songs in a way that the Zappa material bookending it… doesn’t. Not that the jokes subside, but when you toss a 6.5 minute instrumental freakout into “Call Any Vegetable”, it does strike me as something of an emphasis. I enjoy that, for what it’s worth, but fans of the poppier side of Zappa might not.
Luckily for them, the second suite (the “Mothers of Invention American Pageant”) brings the focus back to narrative and social commentary. Folks who enjoy Zappa’s penchant for doo-wop will glom onto “Status Back Baby”, while musical theater fans will fixate on “Brown Shoes Don’t Make It”, a hyper-condensed chunk of musical theater that has to be heard to be believed. “Brown Shoes”, for what it’s worth, is probably the most prophetic part of Absolutely Free, whether intentional or not – establishment politics is a good way to get a free pass on your abusive tendencies. Controversial statements aside, this side emphasizes the vocal arrangements, though the musicians’ instruments still get a good shakedown. It’s probably more accessible than the other half, if that even means anything in a universe that later brought us a slicker, more commercially successful Zappa.
"Frank Zappa's liner notes for Freak Out! name-checked an enormous breadth of musical and intellectual influences, and he seemingly attempts to cover them all on the second Mothers of Invention album, Absolutely Free. Leaping from style to style without warning, the album has a freewheeling, almost schizophrenic quality, encompassing everything from complex mutations of "Louie, Louie" to jazz improvisations and quotes from Stravinsky's Petrushka. It's made possible not only by expanded instrumentation, but also Zappa's experiments with tape manipulation and abrupt editing, culminating in an orchestrated mini-rock opera ("Brown Shoes Don't Make It") whose musical style shifts every few lines, often in accordance with the lyrical content. In general, the lyrics here are more given over to absurdity and non sequiturs, with the sense that they're often part of some private framework of satirical symbols. But elsewhere, Zappa's satire also grows more explicitly social, ranting against commercial consumer culture and related themes of artificiality and conformity. By turns hilarious, inscrutable, and virtuosically complex, Absolutely Free is more difficult to make sense of than Freak Out!, partly because it lacks that album's careful pacing and conceptual focus. But even if it isn't quite fully realized, Absolutely Free is still a fabulously inventive record, bursting at the seams with ideas that would coalesce into a masterpiece with Zappa's next project." (Steve Huey, AMG)
Frank Zappa, guitar, conductor, vocals
Jimmy Carl Black, drums, vocals
Ray Collins, vocals, tambourine, harmonica
Roy Estrada, bass, vocals
Billy Mundi, drums, percussion
Don Preston, keyboards
Jim Fielder, guitar, piano
Bunk Gardner, woodwinds
Digitally remastered