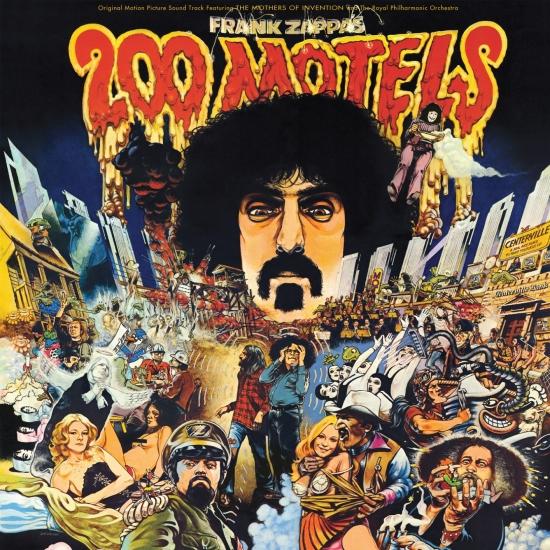 Released in October 1971, Frank Zappa's 200 Motels was a miraculous feat, a cinematic collision of the venerated musician and composer's kaleidoscopic musical and visual worlds that brought together Zappa and his band, The Mothers, Ringo Starr as Zappa - as "a large dwarf" - Keith Moon as a perverted nun, Pamela Des Barres in her acting debut, noted thespian Theodore Bikel, the Royal Philharmonic Orchestra, and an incredible assortment of characters (both on screen and off) for a "surrealistic documentary" about the bizarre life of a touring musician. A heady, psychedelic stew of low and high brow art forms, the film, written by Zappa and co-directed by him and Tony Palmer, mixed together irreverent comedic skits, madcap satire, eye-popping animation and virtuosic on-screen musical performances from both The Mothers and the RPO for a fascinating and free-wheeling multimedia extravaganza. Shot in just 10 days with a budget of around $650,000 from distributor United Artists, 200 Motels was one of the first movies to be filmed entirely on videotape and Zappa and crew pushed the envelope of the burgeoning new medium's possibilities, mostly notably through its use of spectacular - and at the time state-of-the-art - visual effects. Described by Zappa as "at once a reportage of real events and an extrapolation of them... other elements include 'conceptual by-products' of the extrapolated 'real event' ... In some ways the contents of the film are autobiographical," 200 Motels was hailed by the Los Angeles Times as a "a stunning achievement" with "just the right touch of insanity," and the "zaniest piece of filmusical fantasy-comedy since The Beatles' A Hard Day's Night" by Daily Variety.
The music, and its corresponding soundtrack, was equally diverse, a wild pastiche of avant-garde rock and orchestral compositions interspersed with dialog from the film. Up until that time, compositions like the finale piece, "Strictly Genteel," were some of the most ambitious material ever written and recorded by Zappa. The band in the film and on the soundtrack consisted of Frank Zappa (guitar & bass), Mark Volman (vocals & special material), Howard Kaylan (vocals & special material), Ian Underwood (keyboards & winds), Aynsley Dunbar (drums), George Duke (keyboards & trombone), Martin Lickert (bass), Jimmy Carl Black (vocals), and Ruth Underwood (orchestra drum set), not to mention the aforementioned Royal Philharmonic Orchestra. In true Zappa fashion as he wrote in the album's original liner notes, "This music is not in the same order as in the movie. Some of this music is in the movie. Some of this music is not in the movie. Some of the music that's in the movie is not in the album. Some of the music that was written for the movie is not in the movie or the album. All of this music was written for the movie, over a period of 4 years. Most of it (60%) was written in motels while touring."
"The soundtrack to Frank Zappa's strange early-'70s film 200 Motels was always doomed to be a peripheral entry in his discography. The movie's story was not easy to follow, and neither is the record (not that plot was ever a big focus of the production). It's typically wacky Zappa of the era, with unpredictable sharp turns between crunchy rock bombast, orchestration, and jazz/classical influences, as well as interjections of wacky spoken dialogue. Those who like his late-'60s/early-'70s work -- not as song-oriented as his first albums, in other words, but not as "serious" or as silly as his later records -- will probably like this fine, although it's not up to the level of Uncle Meat. It's funny in spots as well, especially the part where a disgruntled sideman gets tempted away from the band to do his own thing (a libretto that was, apparently, based on real-life incidents concerning Zappa sideman Jeff Simmons, who left during the project). On the other hand, there's a growing tendency to deploy the smutty, cheap humor that would soon dominate much of Zappa's work." (Richie Unterberger, AMG)
Frank Zappa, guitar, bass
Jimmy Carl Black, vocals
George Duke, keyboards, trombone
Mark Volman, vocals („Special Material“)
Howard Kaylan, vocals („Special Material“)
Jim Pons, voice (Voice Of The Bad Conscience)
Ian Underwood, keyboards, woodwind instruments
Aynsley Dunbar, drums
Martin Lickert, bass
Ruth Underwood, orchestra drum set
Theodore Bikel, narrator
Royal Philharmonic Orchestra
Elgar Howarth, conductor
The Top Score Singers
Classical Guitar Ensemble
Remastered by Bernie Grundman