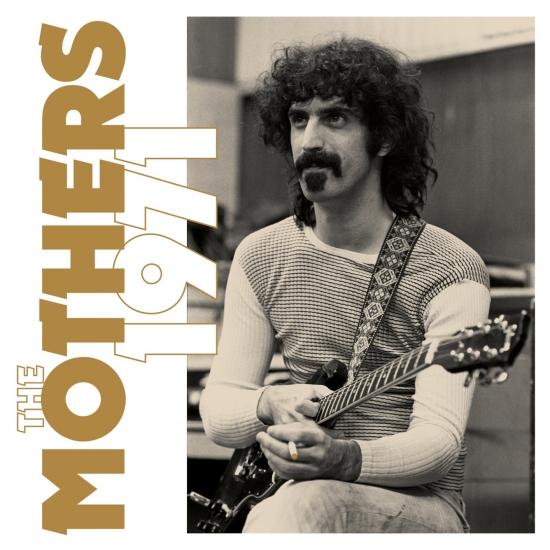 Celebrating the 50th anniversary of the Mothers Of Invention’s ‘71 line-ups, the complete Fillmore tapes are showcased with every note played over 4 shows, including the John Lennon/Yoko Ono encore, majority of tracks are newly mixed. Additionally, the full concert from the Rainbow Theatre in London where FZ was infamously pushed off the stage is newly mixed by Eddie Kramer.
Fillmore East – June 1971 is a live concept-like album. It portrays a peek-behind-the-curtain of the life of a rock band on the road as narrated by Frank Zappa, and contains many thematic elements that, because of time and budget constraints, couldn't be included in the similar movie 200 Motels. The most famous part of the album is "The Mud Shark", a telling of a story told to Mother Don Preston by some members of Vanilla Fudge about a hotel, Seattle's Edgewater Inn, where guests could fish from their rooms. In the tale, a mud shark is caught by one of the members of Vanilla Fudge or its crew and, when combined with a groupie and a movie camera, depravity ensues. Although not stated in "The Mud Shark," this 1969 incident, now referred to as "the Shark episode," also involved Led Zeppelin's drummer John Bonham and road manager Richard Cole, with Vanilla Fudge's singer/keyboardist Mark Stein operating the movie camera.
The band then portray stereotypically egotistical members of a rock band "negotiating" for sex with a groupie and her girlfriends. The girls are insulted that the band thinks they are groupies and that they would sleep with the band just because they are musicians. They have standards; they will only have sex with a guy in a group with a "big, hit single in the charts – with a bullet!" and a "dick that’s a monster." In "Bwana Dik", singer Howard Kaylan assures the girls that he is endowed beyond their "wildest Clearasil-spattered fantasies." And, not to be put off by the standards of these groupies, the band sings the girls the Turtles (of which Kaylan, Volman, and Pons had been members) hit "Happy Together", to give them their "bullet". The album ends with an encore excerpt including both Zappa's familiar "Peaches en Regalia" and what was possibly his most successful early-rock and roll pastiche, "Tears Began to Fall".
Frank Zappa, guitar, dialogue, vocals
Ian Underwood, woodwinds, keyboards, vocals
Aynsley Dunbar, drums
Howard Kaylan, lead vocals, dialogue
Mark Volman, lead vocals, dialogue
Jim Pons, bass, vocals, dialogue
Bob Harris, keyboards, vocals
Guest:
Don Preston, Mini-Moog synthesizer
Recorded live, June 5–6, 1971 at Fillmore East, New York City. Additional recordings on May 2 at Meadowbrook Theater, Rochester Hills Michigan
Produced by Frank Zappa
Digitally remastered by Bernie Grundman