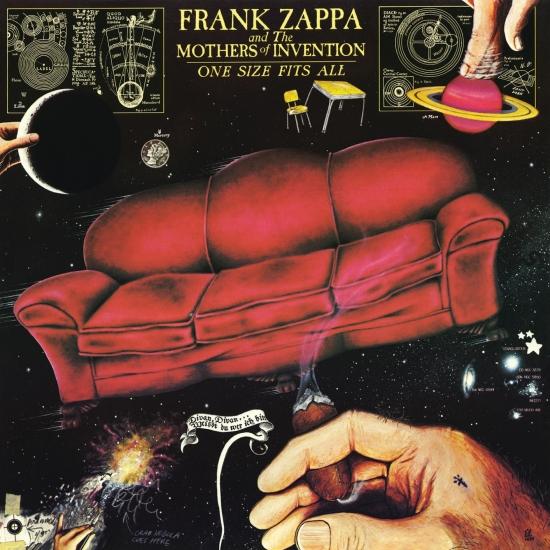 Info for One Size Fits All (Remastered)

One Size Fits All is a rock album by Frank Zappa and the Mothers of Invention, released in June 1975. It is the tenth and last studio album of the band.
The Zappa Family Trust has partnered with Universal Music Enterprises (UMe) for a long-term, global licensing agreement for Frank Zappa's entire recorded catalog, as well as rights management participation across the rest of the visionary cultural icon's creative canon. The partnership spans Frank Zappa's vast music and film vault for new product releases, trademark licensing, film and theatrical production.
"This is literally an opportunity of a lifetime for me," says Gail Zappa. "I am universally thrilled with this partnership because the fans will have unparalleled access to Frank Zappa's Works - the doors to the Vault are now officially WIDE open. I'm especially grateful to announce that Ahmet, my personal Music Sherpa, worked directly with Bruce Resnikoff in creating this relationship and will be taking over the daily operations of the family business."
Frank Zappa, guitar, lead (4, 6, 9) and backing vocals
George Duke, keyboards, lead (1, 8, 9) and backing vocals, synthesizer
Napoleon Murphy Brock, flute, lead (5, 8) and backing vocals, tenor saxophone
Ruth Underwood, marimba, vibraphone, percussion
Chester Thompson, drums, sound effects, voices
Tom Fowler, bass (all but 2)
James "Bird Legs" Youman, bass (2)
Johnny "Guitar" Watson, vocals (7, 8)
Captain Beefheart (credited as 'Bloodshot Rollin' Red'), harmonica (7)
Digitally remastered

Booklet for One Size Fits All (Remastered)