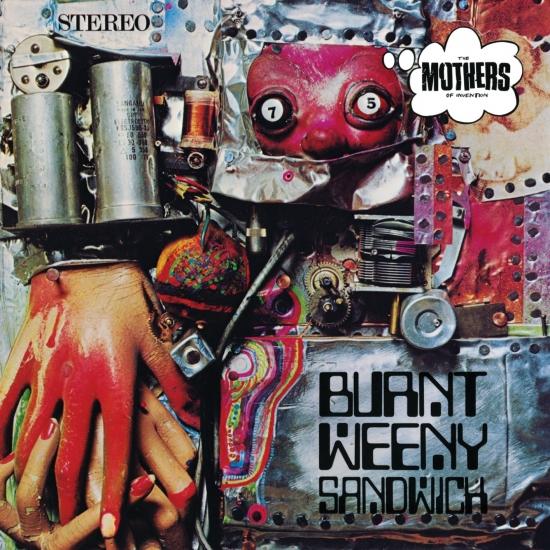 Named for one of Zappa’s favorite quick snacks, essentially a hot dog roasted over a flame and stuck between two pieces of bread, Burnt Weeny Sandwich was released in 1970 following Hot Rats. The album was recorded by Zappa and one of the original incarnations of his legendary combo the Mothers of Invention, whose lineup Zappa disbanded just prior to this album's release. Perhaps suggestive of its gastronomic title, the record is structured like a sandwich: it is bookended by a pair of doo wop covers of the Four Deuces’ "WPLJ" and Jackie & the Starlites’ "Valarie," which harks back to Zappa’s earliest musical influences, and filled with an array of stylistically diverse songs that focus on structured and tightly arranged compositions featuring virtuosic performances by Zappa and his expert ensemble.
Combining studio material and live recordings, the largely instrumental album includes "Theme from Burnt Weeny Sandwich," "Holiday In Berlin Full-Blown," the two-part "Igor's Boogie" and the complex, multi-part near 20-minute centerpiece "Little House I Used to Live In." With portions recorded at London’s Royal Albert Hall in June 1969, “the song's extended improvisations,” Ultimate Classic Rock remarked in their retrospective review, “provided an epic send-off to the beloved Mothers, in all of their eclectic audaciousness under the leadership and in the service of Zappa’s singular vision. The recording even contains a snippet of heated repartee between Zappa and an audience member that spawned his famous critique of all the flower children present: “Everybody in this room is wearing a uniform.”
"Burnt Weeny Sandwich is the first of two albums by the Mothers of Invention that Frank Zappa released in 1970, after he had disbanded the original lineup. While Weasels Ripped My Flesh focuses on complex material and improvised stage madness, this collection of studio and live recordings summarizes the leader's various interests and influences at the time. It opens and closes on '50s pop covers, "WPLJ" and "Valarie." "Aybe Sea" is a Zappafied sea shanty, while "Igor's Boogie" is named after composer Igor Stravinsky, the closest thing to a hero Zappa ever worshipped. But the best material is represented by "Holiday in Berlin," a theme that would become central to the music of 200 Motels, and "The Little House I Used to Live In," including a virtuoso piano solo by Ian Underwood. Presented as an extended set of theme and variations, the latter does not reach the same heights as "King Kong." In many places, and with the two aforementioned exceptions in mind, Burnt Weeny Sandwich sounds like a set of outtakes from Uncle Meat, which already summarized to an extent the adventures of the early Mothers. It lacks some direction, but those allergic to the group's grunts and free-form playing will prefer it to the wacky Weasels Ripped My Flesh." (François Couture, AMG)
Frank Zappa, guitar, organ, vocals
Jimmy Carl Black, percussion, drums
Roy Estrada, bass, backing vocals, Pachuco rap on "WPLJ"
Janet Ferguson, backing vocals on "WPLJ"
Bunk Gardner, wind
Buzz Gardner, trumpet
Billy Mundi, drums (uncredited, left group in December 1967, pictured on gatefold cover and possibly played on "Theme from Burnt Weeny Sandwich")
Lowell George, guitar, vocals
Don "Sugarcane" Harris, violin on "The Little House I Used to Live In"
Don Preston, piano, keyboards
Jim Sherwood, wind
Art Tripp, drums, percussion
Ian Underwood, piano, keyboards, wind
John Balkin, bass on "WPLJ", string bass on "Overture to a Holiday in Berlin"
Digitally remastered