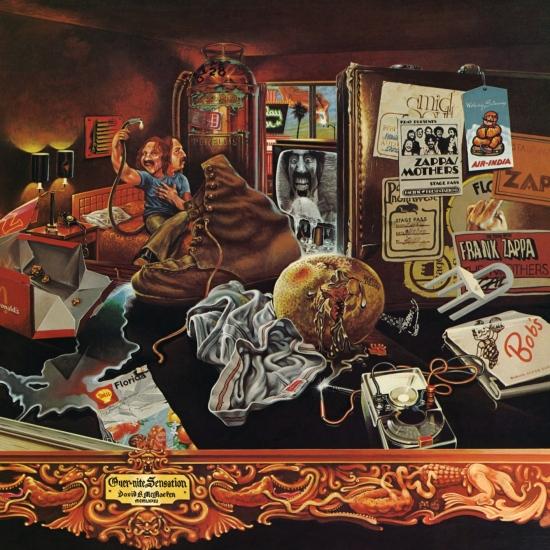 Over-Nite Sensation is a studio album by Frank Zappa and The Mothers of Invention, released in September 1973. It was followed by Zappa's solo album Apostrophe (') (1974), which was recorded during the same sessions.
Back home where it belongs, the music of Frank Zappa is now back in the hands of the Zappa Family Trust. To celebrate this, the estate has signed a global license and distribution deal with Universal Music Enterprises to release 60 of the iconic composer's recordings. The UME deal includes the entire Zappa Catalog as it appeared on Frank Zappa's own independent label, Barking Pumpkin Records. Many of the original analog masters have been re-mastered for this occasion.
“The artist and composer, Frank Zappa, is one of the most important and influential artists in music history with his prolific body of work, including his breakthrough rock ‘n roll concept albums. We are honored that Gail Zappa and the Zappa Family Trust have entrusted us with his legacy. We intend to honor him and bring high quality releases, digital and physical, for his new and longtime fans,” said Bruce Resnikoff, President/CEO, Universal Music Enterprises (UMe).
Originally released in September of 1973, Over-Nite Sensation was recorded with The Mothers of Invention during the same sessions as Frank Zappa's 1974 solo album Apostrophe and it collects seven tight tracks produced, arranged and conducted by FZ himself. Featuring some of the most accessible material in Zappa's prolific career, Over-Nite Sensation became his second gold album and many of its tracks became concert staples including "I'm the Slime," "Dirty Love" and "Montana."
Frank Zappa, guitar, vocals on all tracks except "Fifty-Fifty" and most of "Zomby Woof"
Kin Vassy, vocals on "I'm the Slime", "Dinah-Moe Humm" and "Montana"
Ricky Lancelotti, vocals on "Fifty-Fifty" and "Zomby Woof"
Sal Marquez, trumpet, vocals on "Dinah-Moe Humm"
Ian Underwood, clarinet, flute, alto saxophone, tenor saxophone
Bruce Fowler, trombone
Ruth Underwood, percussion, marimba, vibraphone
Jean-Luc Ponty, violin, baritone violin
George Duke, synthesizer, keyboards
Tom Fowler, bass
Ralph Humphrey, drums
Tina Turner and the Ikettes, backing vocals (uncredited) (Tracks 2-3 and 5-7)
Digitally remastered