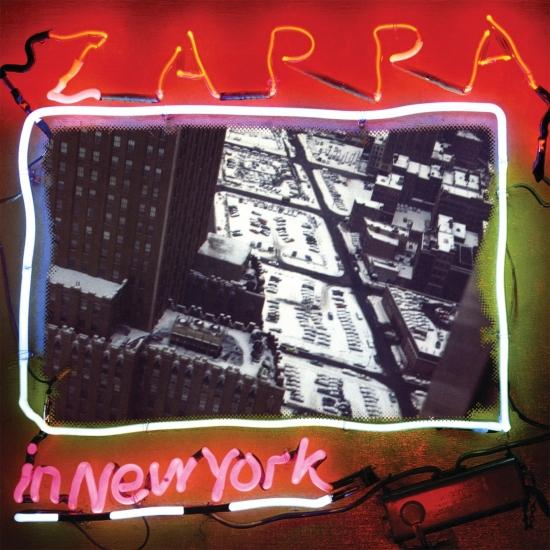 In celebration of its eventual release in 1978, this 40th Anniversary Edition features all-analog mastering of the original album mix, unavailable since first issued.
In 1976, Frank Zappa played four historic sold-out concerts at The Palladium in New York City the week between Christmas and New Year's. These thrilling shows – described by band member Ruth Underwood as "theatrical, outrageous and raucously funny, but also filled with startling and gorgeous music, dating from Frank's 1960s output to literally the moment the curtain went up"— served as the source material for the live double album Zappa In New York which was constructed from the best-played performances with overdubs later recorded in the studio. Originally slated for release in 1977, the album was delayed for a year due to record label censorship issues, mostly over the controversial song "Punky's Whips," and finally released in 1978. One of Zappa's most beloved collections of songs, the now classic album included a sensational live version of "Sofa" alongside nine new compositions, including the complex percussion-based piece "The Black Page," which has become infamous in the drum community as the ultimate challenge, the Devilish comedic sendup "Titties & Beer," and the notorious aforementioned "Punky's Whips" about Punky Meadows, the flamboyant guitarist for the band Angel.
Zappa In New York capped off a terrific year for the ever-prolific and always-moving musician which included shows around the globe including his second Australian tour and one and only Japanese jaunt, the release of his album Zoot Allures and Grand Funk Railroad's record Good Singin' Good Playin, which he produced, a string of Halloween shows and a performance on "Saturday Night Live" which ended up having a profound impact on the Palladium shows. Following an on-air collaboration with SNL's announcer Don Pardo and the show's house band, Zappa invited them to be a part of the shows after three of the horn players so loved playing with Zappa that they asked if they could be involved. As Travers and Brown write in the illuminating liner notes: "Out of nowhere, the concept of adapting horns to the scheduled concerts became a reality. Frank was immediately swept up in the pleasure and challenge of writing and arranging parts for the existing material."
The collection showcases some of Zappa's most masterful guitar playing and electrifying arrangements as he leads an exceptional band featuring Ray White on vocals and guitar, Terry Bozzio on drums and vocals, Eddie Jobson on keyboard, Ruth Underwood on percussion and synthesizer, Patrick O'Hearn on bass and vocals and David Samuels on timpani and vibes. Don Pardo provided "sophisticated narration" and the brass section, featuring jazz duo the Brecker Brothers with Randy Brecker on trumpet and Michael Brecker on tenor saxophone, was rounded out by the SNL players: Lou Marini on alto sax, Ronnie Cuber on baritone sax and Tom Malone on trombone.
Frank Zappa, conductor, lead guitar, vocals
Ray White, rhythm guitar, vocals
Eddie Jobson, keyboards, violin, vocals
Patrick O'Hearn, bass, vocals
Terry Bozzio, drums, vocals
Ruth Underwood, percussion, synthesizer, and various humanly impossible overdubs
Don Pardo, sophisticated narration
David Samuels, timpani, vibes
Randy Brecker, trumpet
Mike Brecker, tenor saxophone, flute
Lou Marini, alto saxophone, flute
Ronnie Cuber, baritone saxophone, clarinet
Tom Malone, trombone, trumpet, piccolo
John Bergamo, percussion overdubs
Ed Mann, percussion overdubs
Louanne Neill, osmotic harp overdub
Digitally remastered