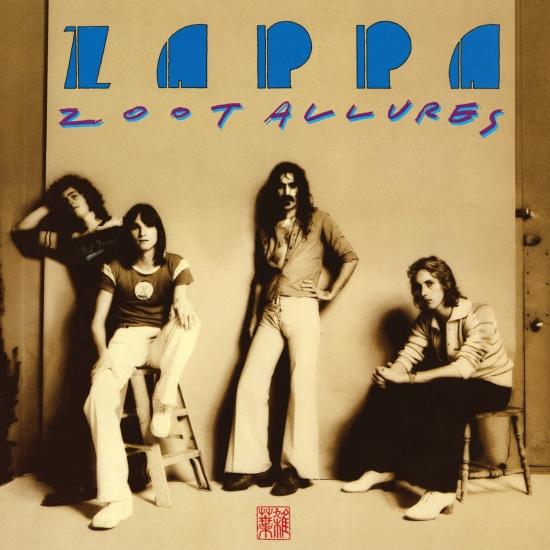 Zoot Allures is a 1976 rock album by Frank Zappa. This was Zappa's only release on the Warner Bros. Records label. Due to a lawsuit with his former manager, Herb Cohen, Frank Zappa's recording contract was temporarily reassigned from DiscReet Records to Warner Bros. The album was originally conceptualized as a double LP, but Zappa rearranged, edited, and shortened the track listing to what was eventually released as a single album. Zappa recorded the album after completing a world tour with a band including Napoleon Murphy Brock on tenor sax and vocals, Andre Lewis on keyboards, Roy Estrada on bass and Terry Bozzio on drums. However, this band appeared only on the live track "Black Napkins" with only Bozzio retained to play on the sessions, although Lewis and Estrada contributed backing vocals.
"Zoot Allures, released in October 1976, is mostly a studio album (there are some basic live tracks, as in the title track and "Black Napkins") featuring a revolving cast of musicians who, oddly, do not correspond to the ones pictured on the album cover (for instance, Patrick O'Hearn and Eddie Jobson did not contribute). Compared to previous releases like One Size Fits All, Roxy & Elsewhere, or even Over-Nite Sensation, and to upcoming ones such as Zappa in New York, Studio Tan, or Sheik Yerbouti, Zoot Allures sounds very stripped down to bare essentials. Zappa focused on limited instrumentation, lots of bass, and whispered vocals to create a masterpiece of dark, slow, sleazy rock. Except for the opening and closing numbers ("Wind Up Workin' in a Gas Station" and "Disco Boy"), all the material is slow to medium tempo with Zappa delivering the closest he'll ever get to a crooner vocal performance. "The Torture Never Stops" is the highlight, ten minutes of suggestive lyrics, crawling riffs, searing solos, and female screams of pain. That song and "Disco Boy" became classic tracks; "Black Napkins" and "Zoot Allures" rate among the man's best guitar solos. Historical note: The album was first devised as a two-LP set and would have included "Sleep Dirt," "Filthy Habits," and "The Ocean Is the Ultimate Solution," which all also fit the mood. Although humor has not been completely evacuated, Zoot Allures comes through as a much more serious rock record. Yet, it is more than a transitional album; it represents one of Zappa's strongest accomplishments." (François Couture, AMG)
Frank Zappa, guitar (all tracks), bass (1, 3–7, 9), lead vocals (1, 3, 4, 5, 7, 9), synthesizer (1, 4, 5, 9), keyboards (3, 5, 7, 9), director of recreational activities (3)
Terry Bozzio, drums (all tracks), backing vocals (5, 9)
Additional musicians:
Davey Moiré, lead vocals (1), backing vocals (1, 9), engineer
Andre Lewis, organ (2), vocals (2), backing vocals (5, 9)
Roy Estrada, bass (2), vocals (2), backing vocals (4, 5, 9), drone bass (6)
Napoleon Murphy Brock, vocals (2)
Ruth Underwood, synthesizer (4, 6, 7), marimba (6, 8)
Captain Beefheart, harmonica (4, 5) (credited as "Donnie Vliet")
Ruben Ladron de Guevara, backing vocals (5)
Ian Underwood, saxophone (6, 7)
Bruce Fowler, trombone (6, 7)
Sal Marquez, trumpet (6, 7)
Dave Parlato, bass (8)
Lu Ann Neil, harp (8)
Miss Sparky [Linda Sue Parker], backing vocals (9)
Digitally remastered