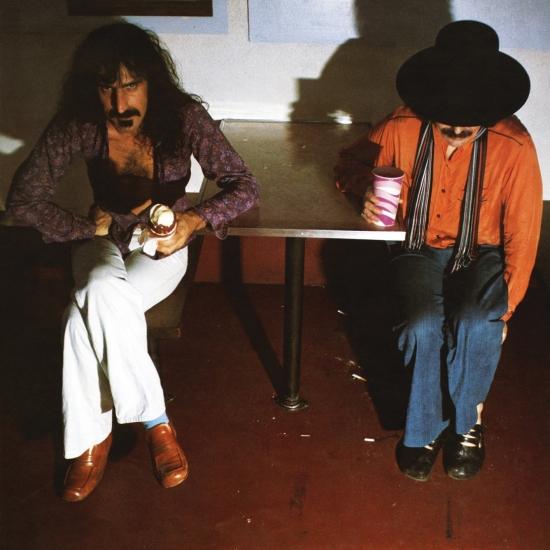 While not a collaboration, there’s no denying that Frank Zappa helped bring Captain Beefheart’s game-changing Trout Mask Replica to fruition. Yet while both were demanding bandleaders busy tearing up the rulebook and redefining the lexicon of rock – Zappa with his satirical deconstructions of rock’n’roll, Beefheart with his primal, blues-indebted exhortations – they were also headed down divergent paths. Zappa left nothing to chance, planning everything to the final detail. Beefheart, meanwhile, worked in a creative hurricane that sometimes seemed as chaotic as his stream-of-consciousness lyrics. An acrimonious split between the two personalities would take several years to mend.
In the mid-70s, however, both were at a crossroads. Zappa was about to say goodbye to his long-time band The Mothers Of Invention, while Beefheart, following his divisive foray into more overtly commercial territory, found himself casting around for a new Magic Band. Burying the hatchet, the two hit the road for a brief spring US jaunt in 1975, portions of which were captured on tape for Zappa’s 1975 album Bongo Fury, part recorded in the studio, part recorded at the World Armadillo Headquarters in Austin, Texas.
Speaking to Rolling Stone magazine early in the tour, Zappa revealed that Beefheart had made the initial contact, calling up to praise his 1974 album Apostrophe (’) and also to make amends for things once said. “He apologized for all the garbagio and asked for a job,” Zappa said, adding, “The Captain repented. He had been real confused.”
Not that Beefheart’s job was a given: he initially failed auditions, thanks to what Zappa termed “a problem with rhythm”; finally, he “squeaked by” just before the tour kicked off. By the time they recorded Bongo Fury, however, the opposing forces had found a happy union. Beefheart emerged as an electric preacher man poised somewhere between haranguing the people and producing visionary incantations. Meanwhile, Zappa and the Mothers flexed their reliably assured musicianship, driven by newcomer Terry Bozzio on drums.
Released on October 2, 1975, the album took three months to get notice in Rolling Stone, who panned it in a dismissive January 1, 1976 review. But Bongo Fury has since risen in stature and continues to give fans much to chew over: Zappa acolytes can argue for the supremacy of their hero on an album that catches the last gasp of one of his most celebrated line-ups; Beefheart fans can assert the artistic relevance of the Captain following the safe-playing outings Unconditionally Guaranteed and Bluejeans & Moonbeams.
Indeed, it’s on one of two Beefheart showcases that both sides arguably rise to their finest moments on the record. “I usually played such things as roughneck and thug,” he says on “Sam With The Showing Scalp Flat Top.” With the Mothers punctuating his phrasing, Beefheart continues: “Opaque melodies that would bug most people. Music from the other side of the fence. A black swan figurine lay on all color lily pads. On a little conglomeration table of pressed black felt.” By the time he starts bellowing the two words that gave the album its title, the Mothers slide in line, seemingly out of nowhere settling into “Louie, Louie” – one of Zappa’s many reworks of the song.
A clutch of studio recordings also appeared on the album: “200 Years Old,” “Cucamonga” and the intro to “Muffin Man” dating back to the January 1975 sessions for One Size Fits All. Though while these catch the Mothers in fine form, it’s the live tracks that most fans return to.
Coming off the road, Beefheart returned to the studio with a new band, recording the ill-fated Bat Chain Puller for Zappa’s DiscReet imprint. Those tapes would remain in legal limbo until 2012, causing yet another rift between the two school friends. Despite never quite patching things up again, the Captain nevertheless understood Zappa’s art. “Frank is probably the most creative person on this planet,” he declared during the 1975 tour. “He writes things for instruments that haven’t even been invented… He’s another Harry Partch.”
Words which Beefheart fans might well deem suitable for their own hero.
Frank Zappa, lead guitar, vocals
Captain Beefheart, harp, vocals, shopping bags
George Duke, keyboards, vocals
Napoleon Murphy Brock, saxophone, vocals
Bruce Fowler, trombone
Tom Fowler, bass
Denny Walley, slide guitar, vocals
Terry Bozzio, drums
Chester Thompson, drums (on 200 Years Old and Cucamonga)
Robert "Frog" Camarena, vocals on Debra Kadabra
Recorded Live at Armadillo World Headquarters, Austin Texas 20th & 21st of May 1975
Digitally remastered